Digital banking, at its core, remains a balance sheet-driven business, and profitability hinges on the entity's ability to operate a sustainably profitable lending franchise. Maintaining high user engagement will be key in driving further growth.

With digital banks gaining prominence, we reviewed the business models of 12 select profitable operators across developed and emerging economies in Europe and Asia to identify key contributing factors to their success.

Fee-driven services may be effective in helping digital banks gain scale quickly, but that alone may not drive profitability due to lower margins. Loan products offer better monetization opportunities, and developing an effective loan proposition supported by an established deposit base will be key in attaining operational breakeven. Given the low barriers of switching banks, we think that digital banking upstarts will need to build an ecosystem and put in place a targeted cross-selling strategy to increase relevance to users and improve bottom line. 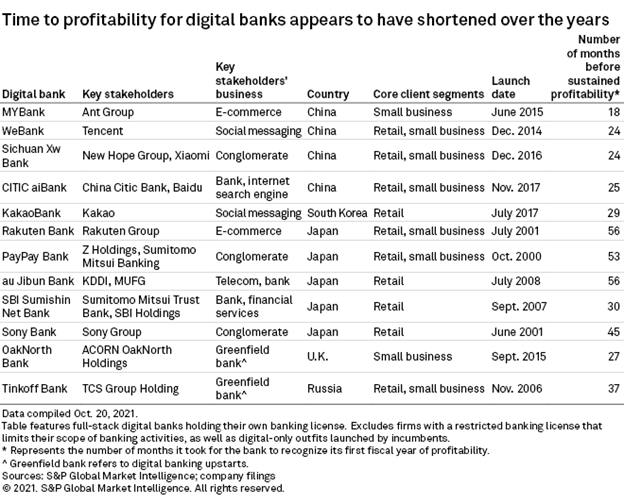 Among profitable digital banks, the time taken to attain sustained profitability appears to have shortened over the years. In the early 2000s, digital banks took an average of 46 months to see their first fiscal year of profitability while those launched post-2014 took just 25 months on average.

Profitable digital banks often gain relevance by solving financial pain points or addressing market gaps left by incumbents. For instance, among the 10,000 first-time small and medium-sized enterprises WeBank Co. Ltd. saw last year, over 60% had never obtained a loan from a bank before.

While South Korea is a relatively well-banked market, mobile banking experience was lacking as banking services are often spread across multiple apps. KakaoBank Corp. rose to prominence for its superior user experience. The bank also effectively catered to underserved customer segments. In 2019, KakaoBank disbursed over 1 trillion won in loans to consumers who did not have a financial track record.

Comparing the financials of profitable digital banks against those that have yet to break even, it is apparent that digital banking, fundamentally, is still a balance sheet-driven business. For most virtual banks with a positive bottom line, net interest income forms the bulk of operating revenue, even in Japan, where banks face depressed net interest margins due to the country's negative interest rate policy.

The ability to generate strong interest income may in fact signal a tipping point of profitability for digital banks. In its latest fiscal year ending March 2021, U.K.-based Starling Bank Ltd. generated over 60% revenue from net interest income. Although the bank has yet to book its first fiscal year profitability, it broke even in October 2020 and has been recording monthly profits since.

Meanwhile, other digital banks that are still loss-making on an annual basis are largely reliant on fee income, suggesting that commission-based revenue may be insufficient to drive operational breakeven.

Fee-based products such as payments or sales of third-party services may help attract users at scale, but margins tend to be lower. The profitability of digital banks, it seems, hinges on a sustainably profitable lending operation.

Despite catering to users with a historically thin credit profile, most profitable digital banks record a lower nonperforming loan ratio than the industry average. This is most apparent among digital banks backed by well-established parent companies.

By applying predictive analytics on reams of proprietary customer data, digital banks were able to effectively credit score users who may be shunned by traditional risk models. Some digital banks have also augmented their risk assessment mechanism with innovative technology. For example, to extend loans to farmers in rural areas, China's Zhejiang E-Commerce Bank Co. Ltd., which operates as MYBank, launched a satellite-risk control system that enables real-time monitoring of crops. This facilitates the collection of data on the agricultural output of farmers, which would have otherwise been scarce.

In general, banks with a lower nonperforming loan ratio may have the ability to set aside fewer provisions for impairment charges, contributing to an improved bottom line.

Pricing for risk rather than pricing to compete is also imperative to a sustainably profitable lending operation.

With a core focus on unsecured consumer loans, Russia's JSC Tinkoff Bank has generally seen a higher nonperforming loan ratio than the banking average in Russia. Yet, Tinkoff has been able to offset the elevated cost of risk with higher yields as its loan pricing mechanism is based on a net present value model that factors in a 30% hurdle rate. The net interest margin of Tinkoff was 12.3 percentage points above the industry average, contributing to superior profitability metrics.

Scaling up through partnerships

Sustained loan growth can only be achieved with a growing deposit base. This could be challenging for digital banks as customers tend not to use them as their primary financial institutions. Despite a large user base, digital banks have less than a 1.5% market share in total domestic deposits and loans.

One way in which digital banks have sought to build scale swiftly is by embracing banking-as-a-service, or BaaS. BaaS refers to a setup where banks open their application programming interfaces for third parties to develop and extend banking offerings to their end users. In doing so, digital banks can leverage the brand presence and user base of their partners while minimizing customer acquisition costs.

U.K.-based OakNorth Bank PLC, for instance, is offering its savings account through several financial technology companies, and this has proven effective in new-user acquisition. Such alliances have netted the bank 102,000 new savings customers in 2019, exceeding the 42,000 users it drew in from direct channels.

The BaaS model is particularly viable with the proliferation of embedded finance, a trend where nonbanks integrate financial services to foster customer loyalty. In this model, BaaS serves as the underlying infrastructure enabler.

SBI Sumishin Net Bank Ltd. in Japan, for example, has identified BaaS as its next frontier of growth. The bank is supporting the neobank development of over 20 Japanese companies including Japan Airlines, which has since launched its own suite of deposits and loan products.

Co-launching products with other entities provides another means of acquiring users at scale. KakaoBank, for example, partnered with E-mart, a discount chain, and Market Kurly, an online grocery retailer, to launch a 26-week installment savings product in which subscribers are entitled to various benefits at the retailers. The campaign with both entities drew in 560,000 and 230,000 accounts, respectively, for KakaoBank within two weeks of its launch.

Striking a balance between a customer's lifetime value and acquisition costs is critical to generating sustainable profitability. To this end, digital banks affiliated with a technology platform have a strong advantage. Besides acquiring users affordably, these digital banks can maintain a high engagement level with users as banking services are often synergistic with their parent's native business.

Tokyo-based Rakuten Group Inc., for instance, operates a stand-alone credit card unit and offers incentives to users who pay off their card balance with a Rakuten bank account. This contributed to 32% year-over-year growth in the bank's number of direct debit transactions and a subsequent 50.4% year-over-year increase in the number of users choosing Rakuten Bank Ltd. as their payroll bank in the first quarter of 2021.

Digital banking upstarts, on the other hand, may find it necessary to build an ecosystem to maintain high user engagement and encourage customer retention.

The convenience of mobile onboarding of users is a double-edged sword. While it is more cost-efficient to onboard a user, the barriers of switching banks are also much lower, particularly as digital banks tend to be secondary accounts. As such, digital banks should continuously seek to improve their relevance to users through targeted cross-selling. This will also aid in increasing the lifetime value of customers, contributing to better unit economics and improved bottom line.

Tinkoff Bank offers an example of how a digital banking upstart can attain sustained profits. Established in 2006, Tinkoff began as a credit card issuer. Over the years, it transitioned into a so-called super-app, offering a range of proprietary and third-party financial and lifestyle services on a single platform.

Products offered by Tinkoff were designed to improve cross-selling opportunities. The bank noted that users who have a current account with the bank, which it refers to as Tinkoff Black users, tend to be more engaged than users of other Tinkoff products. As such, products were offered in bundles to promote the uptake of Tinkoff Black in the hope of improving engagement levels. For instance, cash loans are disbursed through Tinkoff Black and the application of a loan would therefore necessitate the opening of the current account.

For more effective cross-selling, Tinkoff sought to improve its understanding of users by offering contextual suggestions through the app to gather data on consumers' preferences and leveraged machine learning to offer personalized recommendations. The average number of products per active customer grew from 1.1x in 2016 to 1.4x in 2020.

The business models of digital banks will inevitably be influenced by the operating and regulatory environment in their respective jurisdictions. But common observations across profitable entities suggest that building a sustainable digital bank is dependent upon the ability to operate a sustainably lending business and create lasting customer relationships.

For comparison purposes, the analysis also features the revenue structure of select top-funded digital banks that have yet to realize first full-year profitability.