Apr. 24 2019 — Subscription video-on-demand services continue to thrive in the Philippines as they grow through various partnerships, particularly collaborations with local telcos, as the country relies heavily on mobile subscriptions. Local and original content creation is also gaining prominence given the importance of providing differentiated content in a market where digital piracy is still a threat and ad-supported content is prevalent.

Kagan estimates over-the-top video paid subscriptions penetrated approximately 47% of broadband households in 2018 and are expected to grow at a 12% CAGR over the next five years.

As iflix Sdn. Bhd. rolls out its service to emerging markets, the OTT player gains a better understanding of localization requirements and infrastructure as well as payment and authentication issues that need to be addressed within its areas of operation. It entered the Philippines in 2015, and since then, iflix has taken note of how customers consume content — mostly on mobile devices — and has also adopted the strategy of providing locally produced titles.

Singtel's HOOQ has initiatives anchored to new innovations that would change the way local consumers enjoy video content. Since the service was introduced to the Philippine market in 2015, the OTT service has offered offline viewing and introduced weekly pricing for as low as 59 Philippine pesos, or approximately US$1.13. In 2018, HOOQ added video streaming capabilities via web browsers so consumers with lower-end mobile devices or low data caps could continue using HOOQ even with unstable network conditions and without downloading the app.

Netflix Inc. has been making strides toward integrating into the local landscape since it launched in 2016. The global OTT player entered a partnership with ABS-CBN Corp.'s SKY Cable Corporation in 2017. One Sky subscribers were able to pay their Netflix subscription via SKY, which also allowed qualified SKY subscribers to access Netflix.

Amazon.com Inc.'s Amazon Prime Video entered the country as part of its global rollout in 2016, but only established a partnership with Globe Telecom in 2018. This collaboration provided telco subscribers, both new and existing, eligibility for a six-month subscription to Amazon Prime Video, along with Amazon's Twitch Prime.

Select subscription OTT services have maintained affordable pricing in the Philippines. Affordability is crucial for a market where piracy remains prevalent and consumers are still acclimating to paying for content. Iflix, Viu and HOOQ each rank less than 0.5% on our affordability index, which reflects subscription price as a percentage of the country's gross national income at purchasing power parity, or GNI PPP. 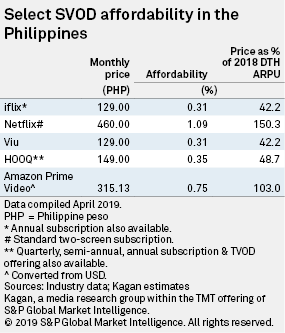