The cost of producing silver has been on a downward trend since 2012. The precious metal's global average all-in sustaining cost, or AISC, dropped 3.4% year over year in 2018 on a coproduct basis, driven by lower labor costs, lower treatment and refining charges, or TCRCs, lower sustaining capital expenditures and weaker local currencies. Lower silver prices compared with the prices of the metals silver is often mined with also played a role in the lower AISC of coproduct silver, since costs are split according to revenue. This is one reason AISC of primary silver mines increased by 1.7% year over year in 2018, in contrast with the AISC trend for all silver. At the same time, output from primary silver mines decreased by 9.5% year over year, due mainly to the continued suspension of mining at Escobal but also to lower head grades across the industry. In 2018, silver production was 29% more costly at a primary mine than at a mine where silver is a byproduct. In 2019, AISCs for both primary and nonprimary silver mines are expected to drop further on the back of lower sustaining capex and fuel costs and weaker local currencies. Lower silver prices compared with other coproduct metals will again exert downward pressure on AISC this year. 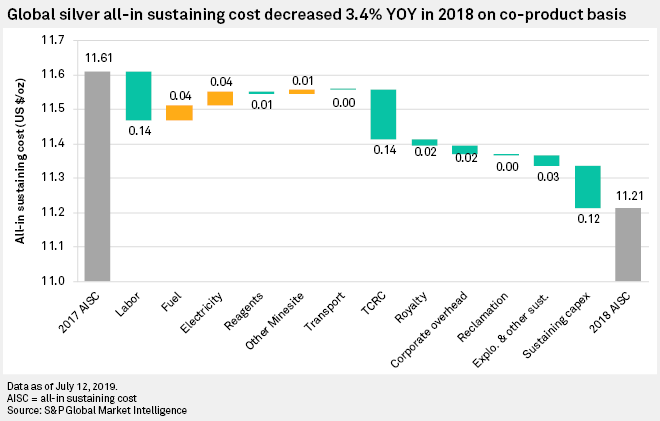 Sustaining capex, TCRCs and labor costs dropped the most among the silver AISC components year over year in 2018. Uchucchacua, one of Peru's major silver producers, cut its 2018 sustaining capex by 73% year over year through changes in capital allocation and its ongoing debottlenecking program, which aims to improve efficiency. Globally, copper, lead and zinc concentrate TCRCs all decreased in 2018, leading to a 9% year-over-year decrease in silver TCRCs as more than 70% of silver is produced from concentrate. Weaker currencies in major silver-producing countries such as Mexico, Peru and Russia also aided in lowering these component costs. 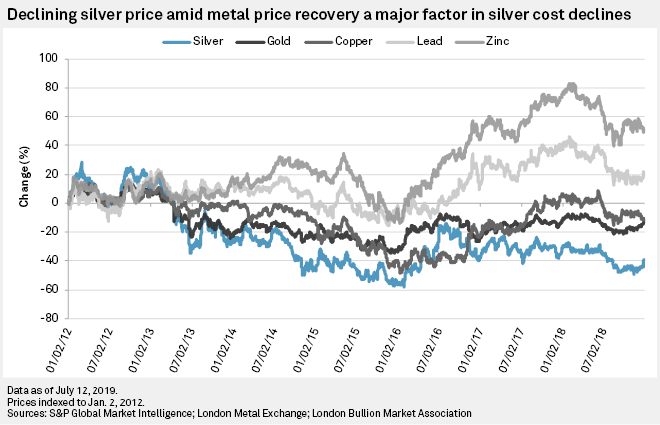 The main driver of the global silver AISC decrease on a coproduct basis has been the poor performance of silver prices compared with the metals it is commonly mined with, such as gold, copper, lead and zinc. Silver was the hardest-hit price in this peer group after 2012 and has had the poorest recovery since. The declining silver price is one of the main reasons the costs of primary and nonprimary silver mines have diverged since 2017. The coproduct method of costing at polymetallic mines splits the costs between the different products based on the respective net revenues they generate. Lower silver prices relative to other metals have led to lower silver revenues, which result in less cost being allocated to silver on a coproduct basis. The silver AISC of nonprimary silver mines shows this effect clearly. 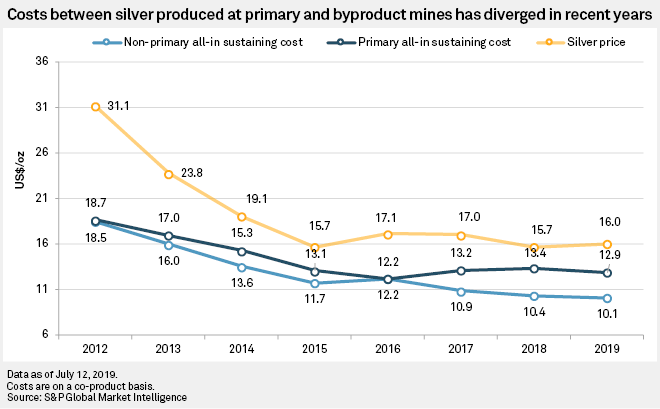 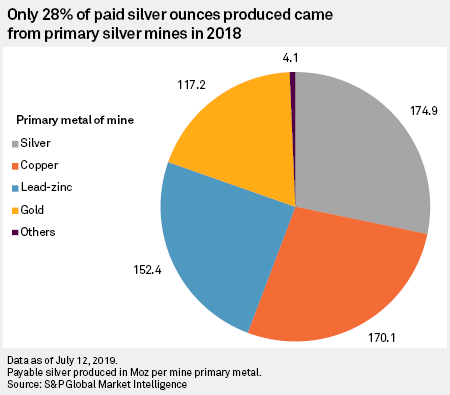 Differences in coproduct metals prices have a bigger effect on nonprimary silver costs compared with the effect such differences have on primary silver costs. Primary silver mine AISC increased 1.7% year over year in 2018 on a coproduct basis as a result of lower silver head grades and increased energy costs. At Saucito, Mexico's largest primary silver mine, an 8.2% year-over-year decrease in silver grade led to a 4% increase in AISC. The decline was due to lower-grade ore from deeper areas of the mine and lower-than-expected grades in high-grade stopes.

Both primary and nonprimary silver mines faced higher energy costs in 2018 due to electricity and fuel price hikes in major silver-producing countries. In Mexico, the world's top silver producer, AISC rose by 3.3% year over year as electricity and diesel costs jumped by 19.1% and 10.9%, respectively, due to an ongoing natural gas shortage. Diesel prices went up as a result of power plants burning diesel instead of gas. This led CFE, the state-owned electric utility, to increase electricity tariffs for industrial consumers. Of all the top silver-producing countries, only China experienced lower energy costs in 2018 as the government continues to cut electricity prices. This enabled the country's silver miners to offset the hike in transport costs due to a clampdown on emissions. 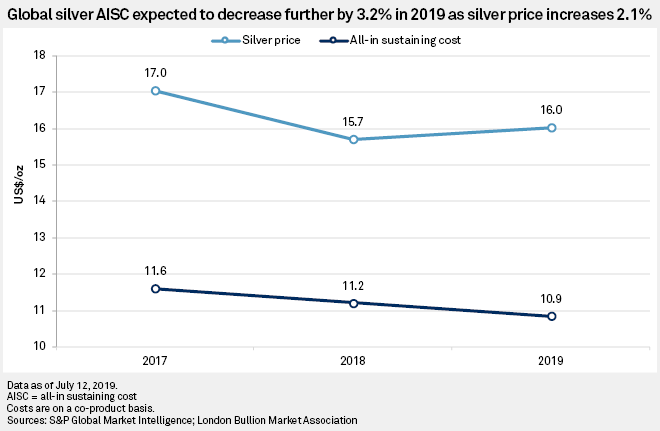 We forecast that 2019 AISCs at primary and nonprimary silver mines will decrease to US$12.90 per ounce and US$10.10/oz, respectively, on the back of lower sustaining capex and fuel costs and weaker local currencies and silver prices. A majority of silver producers are reporting lower sustaining cost guidance for 2019. A decline in fuel costs is expected as year-to-date oil prices show a 7% drop. The currencies of all major silver-producing countries have weakened against the U.S. dollar as of the year-to-date average exchange rates. Although higher TCRCs will partially mitigate the decline, the poor performance of silver prices against other metals will outweigh this and drive AISC down. Consensus price forecasts point to a marginally higher silver price of US$16/oz in 2019, but gold, copper and zinc percentage price increases are forecast to be higher, pulling the global silver AISC to US$10.90/oz on a coproduct basis for 2019.