The following post comes from Kagan, a research group within S&P Global Market Intelligence. To learn more about our TMT (Technology, Media & Telecommunications) products and/or research, please request a demo.

We do not anticipate any further ARPU reductions, as subscribers are migrating toward higher-speed plans

Russian broadband sector is overcoming the economic crisis of 2014-15

Sep. 26 2018 — Russia's fixed broadband market, the world's fourth-largest, is entering a stage of maturity, characterized by high competition and slowed growth that is especially noticeable in Moscow. The country's broadband sector is overcoming the economic crisis of 2014-15 that had caused a decrease in average revenue per user.

There were an estimated 32.6 million subscribers at the end of 2017, translating to a penetration rate of 57.6% of households. Penetration is, however, not homogeneous, mainly due to low adoption rates in rural areas, whereas organic growth in the markets of large and medium-sized cities has already been exhausted. In Moscow, the fixed telecom market is close to saturation, but the areas outside of the capital still offer opportunities for revenue and subscriber-base growth. In the two years following the drop caused by the economic crisis, annual growth rate returned to the 4% level. 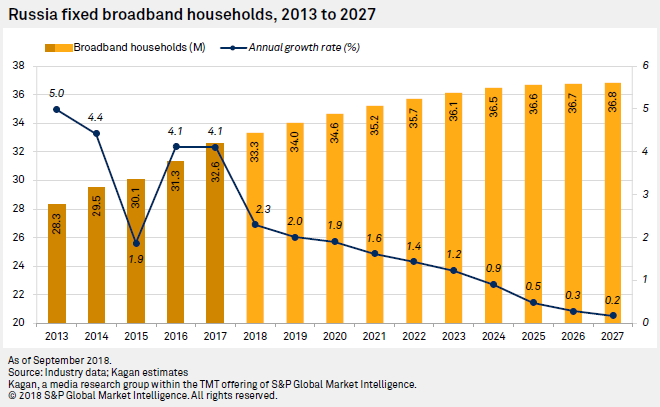 Kagan estimates Russian fixed broadband revenues in 2017 at 148.5 billion Russian rubles, or $2.55 billion. Over the last five years, the subscriber base increased, bringing continuous growth of fixed broadband revenues in the local currency. However, broadband ARPU has slightly declined after the 2015 crisis, as subscribers rationalized their subscriptions and more often chose bundled offers that enable overall service cost reductions. We do not anticipate any further ARPU reductions, as subscribers are migrating toward higher-speed plans of 100 Mbps and up, enabled by the growth of connections in optical technologies, including passive optical networks. 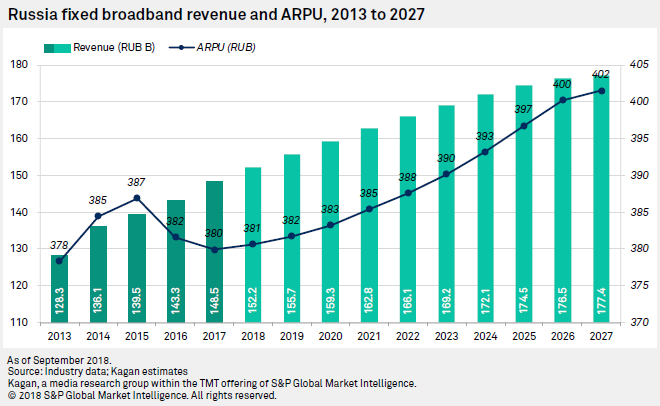 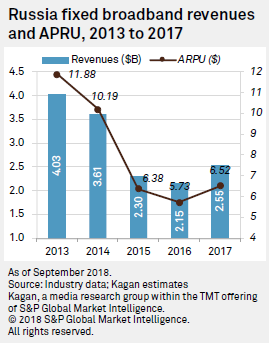 The dramatic decline in revenues and ARPU is much more visible when expressed in U.S. dollars, with both metrics decreasing almost by half between 2013 and 2016. The collapse of the ruble in 2014–15 has severely affected the Russian economy, causing a decrease in operators' incomes and slowing technology development.

The top five broadband providers in Russia serve 71% of subscribers and earn 83% of total revenues, which reached 148.50 billion rubles in 2017. The market leaders are expected to further increase their share in total broadband revenues due to ongoing market consolidation. Due to rising market saturation, operators are making every effort to increase user loyalty by bundling services and reducing prices. Such highly competitive market conditions are increasing the likelihood of further M&A activity. The second-largest broadband provider, ER-Telecom Holding, was especially active on the market, acquiring a number of regional players in the first half of 2018.

The average fixed broadband ARPU in the country amounted to an estimated 380 rubles, or $6.52, in 2017, though individual operator ARPUs varied substantially. Mobile TeleSystems PJSC had the highest ARPU of 589 rubles, or $10.11, as the leading provider in Moscow, which is the most lucrative region in Russia. The country's market leader, Rostelecom PJSC, earned the second-highest broadband ARPU of 464 rubles, or $7.96. The company served 12.7 million subscribers as of year-end 2017 and is able to dictate pricing policy in many regions.

In 2015, VEON Ltd.'s ARPU dropped from second to third place and decreased further in the following year as the company introduced a highly price-competitive "All in One" offer that combines mobile, fixed broadband, pay TV and over-the-top. One of the elements in this offer, broadband internet, was offered with a 1 ruble price tag, which significantly reduced VEON's broadband ARPU to 382 rubles, or $6.55, in 2017 but allowed the operator to stem subscriber losses. 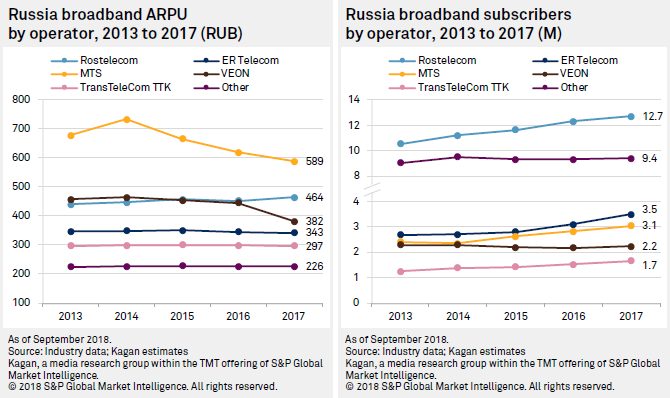