U.S. TV station owners' retrans fees from cable, direct broadcast satellite and telco video operators and virtual multichannel service providers is expected to reach $11.72 billion in 2019, up 11% from $10.57 billion in 2018. That is an upward revision from last year's projections based on consolidation in the industry and a continued rise in renewal rates with increased bargaining power on legacy and streaming platforms for major network TV stations. Longer term, we project retrans and virtual sub fees will grow to $16.26 billion by 2024.

While TV station owners have successfully secured higher retrans fees in each renewal period, net retrans margins averaged 50% in 2018 and, in some cases, below that number, reflecting increases in reverse retrans or network programming expenses to pay for the rising cost of live sports rights.

Our reverse retrans projections call for major affiliate owners to send back $3.57 billion to the major broadcast networks in 2019, up 9% from an estimated $3.27 billion in reverse retrans in 2018, representing 50% of total affiliate retrans revenue of $7.08 billion. Major networks include ABC, CBS, NBC, FOX, MyNetworkTV, The CW, Telemundo, Univision and UniMás.

Net affiliate multichannel retrans revenue is expected to grow low to mid-single digits over the next five years, with reverse retrans as a percentage of affiliate gross retrans gradually increasing in each renewal period from 50% in 2019 to 53% by the end of 2024. Affiliation and retrans renewals generally have staggered contract expiration dates so TV station owners have some visibility on their net retrans. Retrans contracts are renewed every two to three years, while affiliation agreements average four to five years.

According to recent investor presentations and executive guidance in first-quarter earnings calls, TV station owners are seeking retrans rates in the $2.50 to $3.00 per sub range for Big Four network stations, increasing to $3.50 or more with annual rate step-ups over the course of the contract. Based on our analysis of first-quarter 2019 retrans-per-sub rates, major affiliate TV station group owners Gray Television Inc., Meredith Corp., Nexstar Media Group Inc., TEGNA Inc. and Sinclair Broadcast Group Inc. lead our ranking at over $2 per sub on average, approaching $3 if including only Big Four affiliates.

On a net basis deducting reverse retrans payments back to the networks, station retrans and virtual sub revenue are forecast to reach $6.30 billion in 2019, $6.93 billion in 2020, $7.52 billion in 2021 and $8.77 billion by the end of the projection period in 2024. That is consistent with company guidance from the major station owners expected low to mid-teens net retrans growth in the next few renewal cycles and high single-digit growth long term. 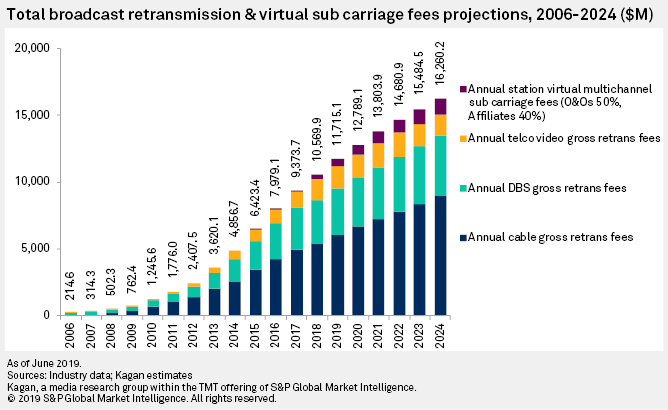 Despite that growth, by 2022, the projected $14.68 billion in multichannel retrans and virtual sub fees are expected to represent just 26.6% of the $55.20 billion we model multichannel operators will pay to basic cable networks and regional sports networks that year, despite the much higher TV viewing share for the Big Four broadcast networks.

We have also updated our reverse retrans projections, which model the funds flowing from the affiliate stations back to their network partners, usually in the form of a programming fee expense. Based on recent affiliation agreement negotiations, all Big Four networks are requiring affiliates in renewals to pay either a per-sub/per-TV-household cash payment or a flat fee per station as a programming expense. Univision Communications Inc. continues to negotiate retrans and online distribution rights on behalf of its affiliate stations, including its arrangement with Entravision Communications Corp., and we have assumed the affiliates receive a straight 40% of those multichannel retrans and virtual multichannel sub revenues.

The distribution model for TV stations in legacy multichannel and virtual streaming platforms continues to evolve. It is expected to be bumpy over the next three to five years as the pay TV universe becomes more fragmented with new direct-to-consumer offerings from Walt Disney Co. and AT&T Inc.'s Warner Media LLC.

There is also an open question about where Sinclair's focus for distribution fees will be with its $9.60 billion deal for 21 Fox Sports RSNs and FOX College Sports from Disney. Sinclair will also have to negotiate rates for its Marquee Sports Network joint venture with the Chicago Cubs, digital networks Stadium and Ring of Honor Wrestling, ad-supported over-the-top platform STIRR and cable network Tennis Channel, along with its local TV stations.

Major station groups are relying on a larger scale to optimize distribution fees for their stations across legacy and virtual multichannel platforms, including the potential for ad-supported OTT, premium subscription direct-to-consumer offerings and mobile opportunities in Next Gen TV (ATSC 3.0).