Most residential customers may believe they are reasonably well served by the current situation, since the GDP Price Index increased by 14.8% from 2010 to 2018

From 2010 through 2018, regulated retail residential electricity prices nationwide increased by 11.3%, notably more than the 6.8% and 9.1% increases for commercial and industrial customers, respectively. As discussed in more detail below, data associated with the direct sale of power through retail choice programs are not included in these prices.

While this comparative price performance may be an anomaly, it conceivably could represent a developing trend, at least for the short term. Residential customers, while by far the largest in numbers, may not possess the level of political influence that the other major customer classes do in state legislatures and regulatory bodies. In addition, most residential customers may believe they are reasonably well served by the current situation, since the GDP Price Index increased by 14.8% from 2010 to 2018, more than the 11.3% electric price increase for residential customers.

The higher rate of residential price increases in the current decade may have been an attempt to correct a historical situation that found larger commercial and industrial customers paying more than their cost of service. We note, however, that cost of service studies and rate design are somewhat complicated, may have subjective aspects, and are not always fully transparent, thus, it is not at all times clear exactly what a specific customer class' cost of service is. Longer term, a continuation of higher relative residential price increases does not appear likely, since small customer complaints will eventually occur and find sympathy among at least some policymakers.

The pricing results for the three customer classes are somewhat different when the percentage price changes are compared for the 2000 to 2018 period. In this case, residential customer rates increased by 53.6%, higher than the commercial class hike of 44.4% but lower than the 56.1% increase for industrial customers. The GDP Price Index increased by 41.2% from 2000 to 2018.

This analysis is largely an offshoot of the Financial Focus June 12 report, "Regulated retail price of electricity — Average price per kWh falls in 2018." For the purposes of this analysis, the District of Columbia is considered a state, while no results are shown for Nebraska since it does not have investor-owned electric utilities.

The price changes by customer class are shown in the table below. A more extensive data table for all regulatory jurisdictions is provided toward the end of the report.

For the 2000 to 2018 period, the restructured versus non-restructured state comparisons, while slightly different, exhibit the same general trend. Of the 14 Tier 1 states, 10 states — Delaware, the District of Columbia, Illinois, Maine, New Hampshire, New Jersey, New York, Ohio, Pennsylvania and Texas — show residential prices that have increased by less than the national average increase of 53.6% over this time frame. For the eight Tier 2 states, the data indicates that residential prices in only one state, Arizona, rose less than the 53.6% national average. Regarding the 29 non-restructured Tier 3 states, 10 — Alaska, Arkansas, Florida, Iowa, Louisiana, Mississippi, New Mexico, North Carolina, Oklahoma and Vermont — show residential electricity prices that have increased at less than the national average.

Viewing the data from another perspective, the number of jurisdictions by restructuring tier with residential electric prices below the national average was unchanged for Tier 2 and was little changed for Tier 3 when comparing 2018, 2010 and 2000. In Tier 1 states, there were six jurisdictions with lower than average prices in 2018 compared to three in 2010 and four in 2000. 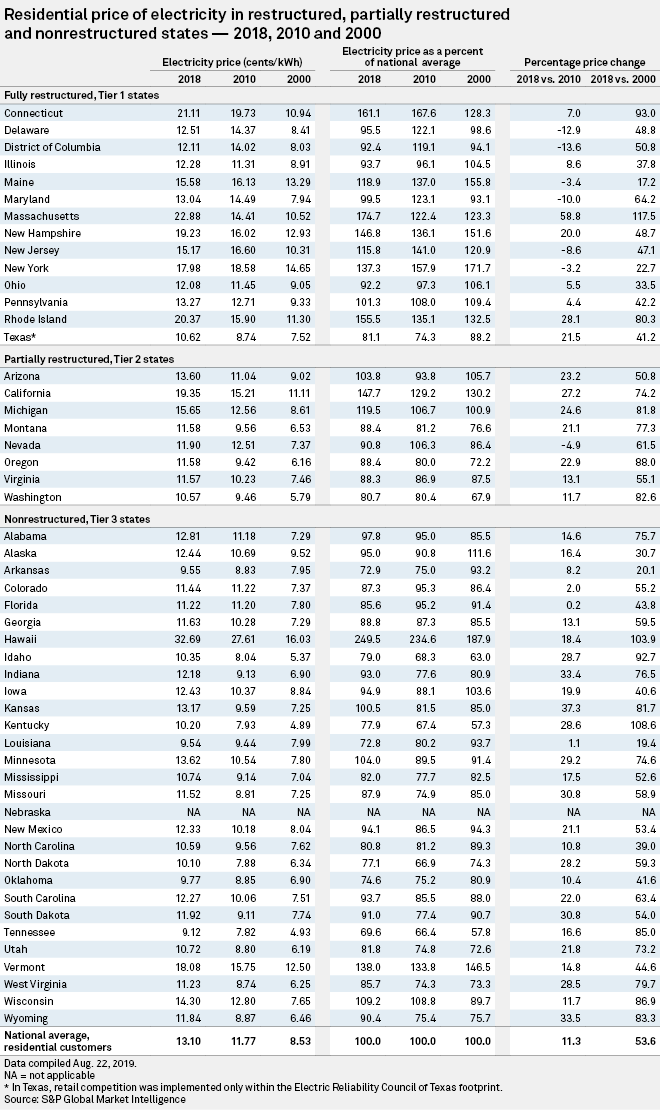 Regulatory Research Associates, a group within S&P Global Market Intelligence, has placed each state regulatory jurisdiction and the District of Columbia in one of three tiers depending on the degree to which the state has restructured its electric industry. In Tier 1, power prices are competitively determined for all retail customers. In Tier 2, competitively priced power is limited to retail access customers, and in Tier 3, power prices are fully regulated for all retail customers. RRA currently places 14 states in Tier 1, eight in Tier 2 and 29 — including Nebraska — in Tier 3, as indicated in the below map. Electric industry restructuring commenced in the mid-to-late 1990s, and most states that restructured had done so by 2005.

The electric industry restructuring tier designations used in this study are from an Aug. 15, 2019, RRA report that ranks the various state regulatory jurisdictions. 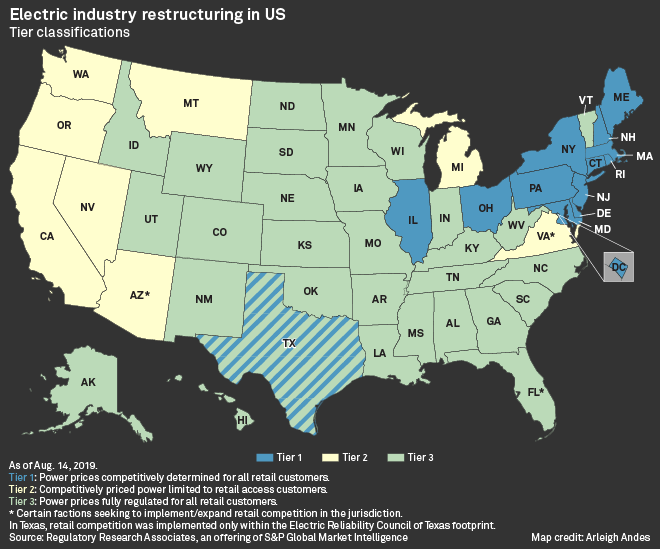