History suggests it will likely take a significant natural catastrophe or another material adverse development to keep the U.S. property and casualty insurance industry from producing a statutory net underwriting gain for a second consecutive calendar year.

But despite the slim margin between profit and loss, the industry's ability to avoid significant red ink in the second quarter has usually boded well for full year results. The period is often characterized by elevated catastrophe losses resulting from tornadoes and other severe storms.

U.S. P&C insurers have generated net underwriting gains in a second quarter only six times in the previous 18 years: in 2004, 2005, 2006, 2007, 2009 and 2018. With the exception of 2005, when hurricanes Katrina, Rita and Wilma made landfall during the third and fourth quarters, those results have foreshadowed full year underwriting profitability for the industry.

Even on the most recent three occasions on which the industry has produced second quarter net underwriting losses of less than $2 billion — in 2013, 2014 and 2015 — companies were still able to generate positive full-year underwriting results. The last time second quarter underwriting losses of a similar magnitude did not serve as a harbinger of full-year underwriting profitability was 2003, when several P&C companies engaged in material strengthening of reserves for prior accident years in response to adverse claims trends for asbestos and certain other perils. Also, unlike in the 2013 through 2015 period, underwriting results for the first half of 2003 were negative.

Net premiums written and earned increased by 1.9% and 4.1%, respectively, on a year-over-year basis in the second quarter, well short of the 6.6% rise in net losses and loss adjustment expenses incurred. As such, the loss and LAE ratio climbed by 1.7 percentage points to 71.8%. A considerably slower rate of increase in other underwriting expenses led to a 0.1 percentage point rise in the expense ratio, which emerged as a key factor in keeping the combined ratio below break-even.

Berkshire Hathaway Inc.'s National Indemnity Co. generated the industry's largest underwriting gain among individual entities during the second quarter at $279.3 million, but that marked a decline from a profit of $575.3 million in the year-earlier period. Another Berkshire company, Government Employees Insurance Co., was among the 12 individual entities with second quarter net underwriting gains of $100 million or more. That list also included United Services Automobile Association and an affiliate.

As to be expected with such a modest underwriting profit, results were not positive across the board. There were 12 individual entities with underwriting losses of $100 million or more, including two State Farm Mutual Automobile Insurance Co. affiliates. The top-tier State Farm entity swung to an underwriting loss of $22.9 million in the second quarter from a year-ago gain of $610.4 million.

The largest year-over-year increases in underwriting profitability among individual entities were recorded by Everest Re Group Ltd.'s Everest Reinsurance Co., the top-tier USAA company and Factory Mutual Insurance Co. with positive changes of $565.9 million, $211.1 million, and $175.1 million, respectively. The USAA group swung to a net underwriting profit of $455.7 million from a loss of $31.5 million in the year-earlier period.

Positive personal and commercial auto profitability trends played a significant role in minimizing the magnitude of the deterioration in overall results.

Following a negative year-over-year comparison in the direct incurred loss ratio in the first quarter, the second quarter result of 65.4% marked a decline from 67% in the year-earlier period.

Direct premiums written trends in the personal auto business showed more evidence of increasing competition, however. The year-over-year rate of growth in the combination of the auto physical damage and private auto liability lines fell to 2.9%, which ranks as the most sluggish pace of expansion in recent memory. Growth rates were about 8% in those lines for six consecutive reporting periods through the second quarter of 2018 before they began to tail off.

In commercial auto liability, the year-over-year written premiums growth rate also compared unfavorably to recent quarters but remained well in excess of other auto lines at 9.8%. It was the first time since the third quarter of 2017 that the growth rate was not in the double digits.

Workers' compensation was the lone major line of business aside from auto liability that showed year-over-year improvement in the direct loss ratio. The second quarter result of 48.7% represented a decline of 0.7 percentage point from the year-ago period. It was the sixth time in the last seven quarters that the workers' comp direct loss ratio fell below 50%. 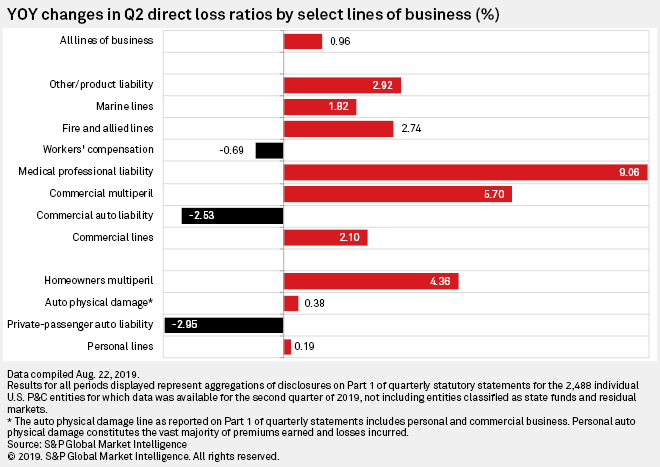 With multiple states effecting declines in workers' comp rates and/or loss costs following an extended period of calendar-year profitability, the direct premiums written growth rate in the business line was negative for the fifth consecutive quarter, though it was surprisingly resilient at a decline of just 0.1%. High rates of employment have helped mitigate the impact of lower rates over the last several years.

The downward movement in workers' comp and commercial auto liability direct loss ratios were especially noteworthy given that certain other casualty lines experienced material deterioration in the second quarter.

Written premium trends varied widely between the two businesses: They fell by 0.7% in medical professional liability, while rising by 8.8% in the other and product liability lines, evidence of the upward rate movement that a number of P&C industry executives referenced during second quarter earnings conference calls.

All told, commercial lines direct premiums written rose by just under 6% in the second quarter, up from growth rates in the low 5% range in each of the previous four quarters. The personal lines growth rate of 3.7% marked a decline from the pace of expansion of 4.1% in the first quarter and 7.1% in the second quarter of 2018 in a development that demonstrates the impact of slower increases in private auto premiums.