The U.S. broadcast station industry is expected to reach $36.47 billion in total advertising revenue in 2022, up 12.9% from $32.31  billion in 2021. Core ad categories have mostly bounced back to pre-pandemic levels, with the exception of the automotive, retail and travel categories, which are still soft. The local ad market has been stronger than the national side of the spot ad business for many station owners. Our 2022 projection breaks down to $24.15 billion from TV stations — including core national and local spot, political and digital/online — and $12.32 billion from radio stations, which includes national and local spot and digital, excluding network and off-air.

TV station ad revenue is expected to return to pre-pandemic levels, and growth during the period 2022-2027 is projected to decline at a negative 0.32% compound annual growth rate. This is primarily a result of an ending on a non-political year, with a continuing shift in national spot ad market to digital. Overall, the spot ad market for TV station owners is expected to be more volatile with the ebbs and flows of political ad spending in election years while growth in new ad categories, expansion of states to legalize sports betting and the prospects of NextGenTV interactive and targeted ads point to the future. TV station core local and national ad revenues in 2022 are expected to grow 5.4% to $17.59 billion, boosted by a stronger core ad market and Olympic ad bump for NBC and Telemundo affiliates.

The radio station advertising business is also expected to rebound from the pandemic and receive a mid-term political ad spending boost, although to a lesser degree than TV, and be up 4.8% in 2022 to $12.32 billion, excluding network and off-air revenue. The recovery is expected to be short-lived and partial as national advertising continues to shift away from radio to streaming audio and podcasting alternatives.

TV station ratings have been relatively stable despite the overall decline in broadcast network ratings as viewers move from traditional multichannel to streaming video platforms, although down off the highs during the pandemic when stay-at-home orders were in place and local news was one of the few lifelines to the community.

Over the five-year projection period 2022-2027, political advertising will be spent disproportionately on local stations in swing-state markets and those with higher expected population growth — such as Arizona, Colorado, Florida, Georgia, Nevada, North Carolina and Texas — which are forecast to rise more than the national average.

Spending in the 2022 midterm elections, spurred by the 50/50 split between the two parties in the U.S. Senate and Republicans looking to gain a majority in the House along with major gubernatorial races in swing states, is expected to reach $3.49 billion, up 15.0% from the last midterm elections in 2018. Our five-year forecast for TV stations takes into account the fluctuations between even/election and odd/nonelection years and calls for $3.94 billion in the next presidential election year, 2024, and $3.70 billion in midterm election year 2026.

By the end of the projection period in 2027, we expect total TV station advertising revenue to reach $23.77 billion, including $19.23 billion in national and local core spot, $1.13 billion in political and $3.41 billion in digital/online revenue. 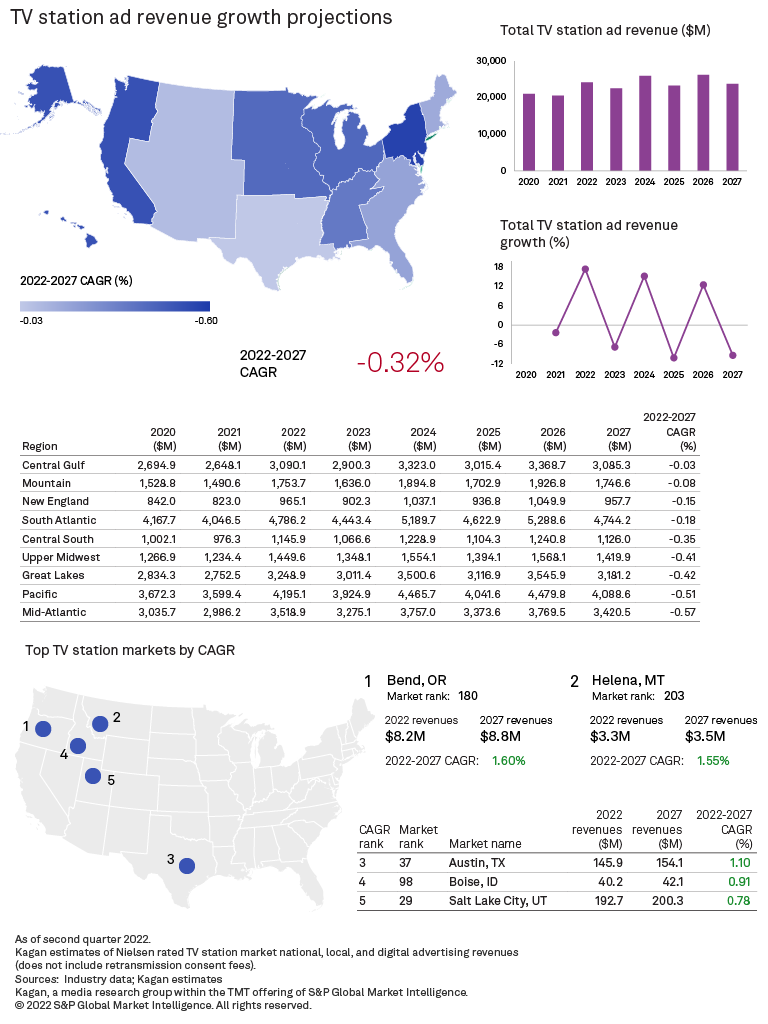 Radio ads are predominantly local and focused on the auto, retail, travel and entertainment categories, which were heavily impacted by the advertising pullback in 2020-21. Some markets were less impacted than others from masking and social distancing orders during the pandemic, and station owners in those areas are expected to fare better based on our market-level forecast.

In addition, radio owners must compete with multiple streaming audio and on-demand options for music and talk, such as Spotify Technology SA and Pandora Media LLC, and overall radio listenership has lessened as a result of the new hybrid or permanent work-from-home economy, which has greatly reduced commuting hours during prime in-car radio time.

Radio's lower ad cost, local audience and relatively high return on investment compared to other media will keep it relevant, although digital investments point to future growth opportunities with the spot ad market for radio expected to decline over the forecast period.

Between 2022 and 2027, we expect radio station local and national spot ad revenues, including digital, to increase at a CAGR of 1.06% in rated markets, with non-rated markets declining, at a CAGR of negative 0.36%. 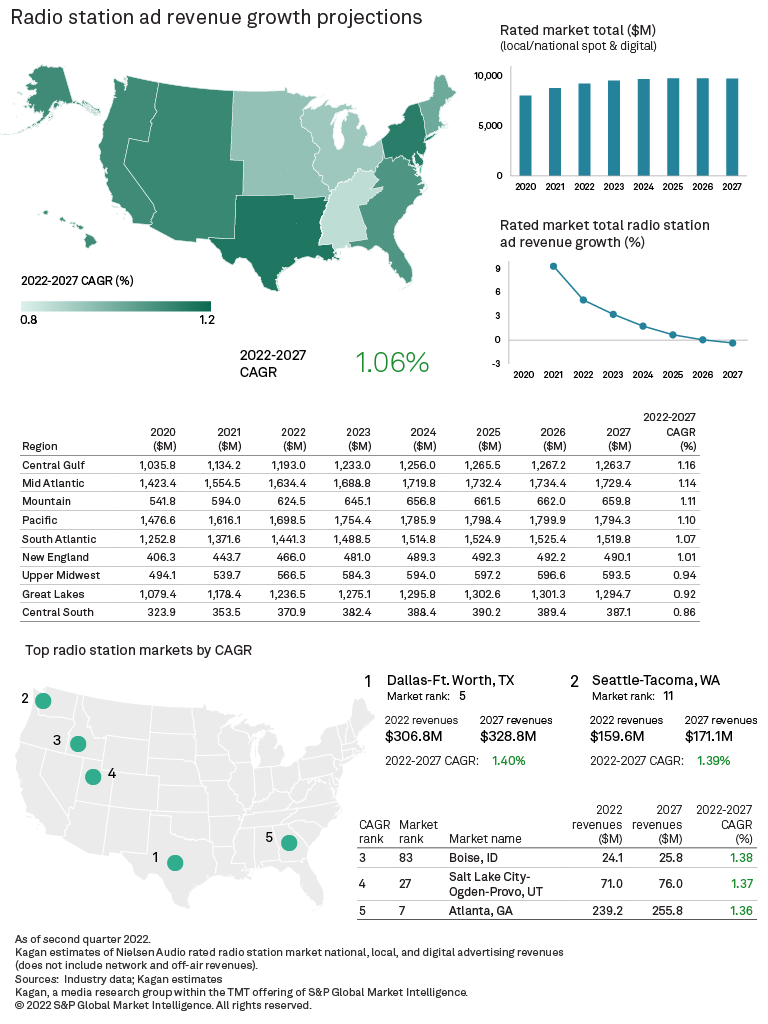 In this report, we present five-year revenue projections for each of Nielsen Holdings PLC's 210 U.S. TV Designated Market Areas for 2021-22 and 253 Nielsen Audio rated radio markets as of spring 2022. Our market-by-market projections use multiple factors to calculate growth rates.

For television, these analysis factors include household growth rates in each of the television market areas, as provided by Nielsen, in conjunction with estimates for political revenue, Olympic Games and World Cup viewership, overall U.S. demographic and consumer trends, and additional ad revenue opportunities through digital multicasting and station streaming. We also incorporate data related to mobile initiatives and changes in local economic factors.

For radio, individual market projections are based on estimated population growth in each core-based statistical area, as provided by Nielsen. Estimates in the model also reflect market-level economic factors, traditional advertising spending shifting to digital and mobile, as well as recent radio listenership trends.

Median household effective buying income growth, total employed civilian population 16+ growth, and other economic statistics from Nielsen are used in our projection model, as well as individual broadcasters' information when available. Additionally, both television and radio revenues are in part based on Kagan's revised 10-year projections for TV and radio as of July 2022.