The pandemic has taken a toll on investments in Asia-Pacific's private financial technology companies, but recent monthly data suggests that a recovery may be in sight.

In the third quarter alone, fintechs in APAC raised $1.3 billion, 8.7% lower than the previous quarter.

The pandemic has taken a toll on investments in Asia-Pacific's private financial technology companies, but recent monthly data suggests that a recovery may be in sight.

Over the first three quarters of 2020, fintechs based in the region raised a combined $3.9 billion, down 46% compared to the same period of 2019, while deal volume fell by 20.5% to 318. Prior-year results were somewhat inflated by Jingdong Digital Technology Holdings Co. Ltd.'s $1.9 billion series B round in January; however, 2020's total is still 26.1% lower than the year-ago period even when excluding this transaction.

In the third quarter alone, fintechs in APAC raised $1.3 billion, 8.7% lower than the previous quarter. Year-to-date capital flows into APAC fintechs, however, appear to have hit a trough in June. Both monthly funding volume and value have since risen, possibly signaling a cautious return of investor interest. 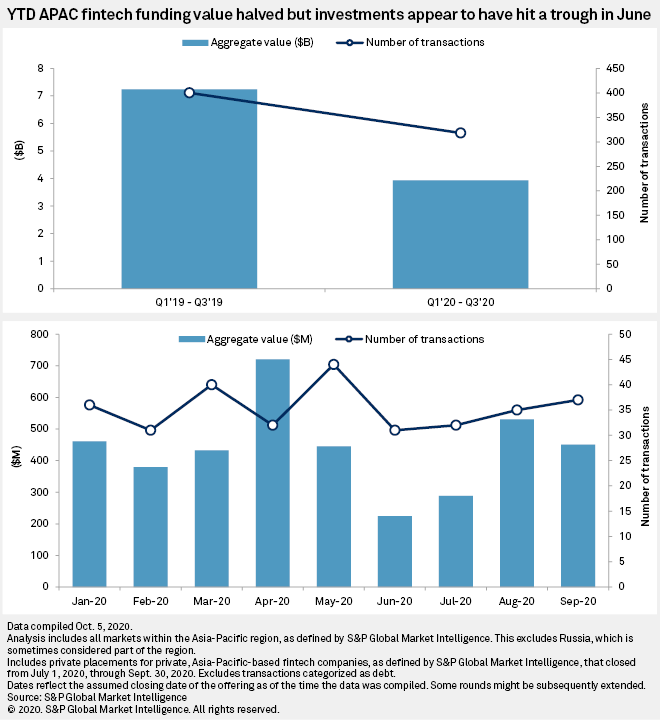 After a steep decline in the second quarter, China saw a resurgence in private fintech investments and accounted for a third of Asia-Pacific's aggregate fintech funding value in the third quarter. Deal counts by Chinese fintechs doubled to 20, while venture capital flows surged by more than tenfold to $425 million, though this was largely bolstered by Waterdrop's $230 million series D round.

Southeast Asia saw the most fintech funding activity in the third quarter and would have topped fintech investments in Asia-Pacific if not for the Waterdrop round. 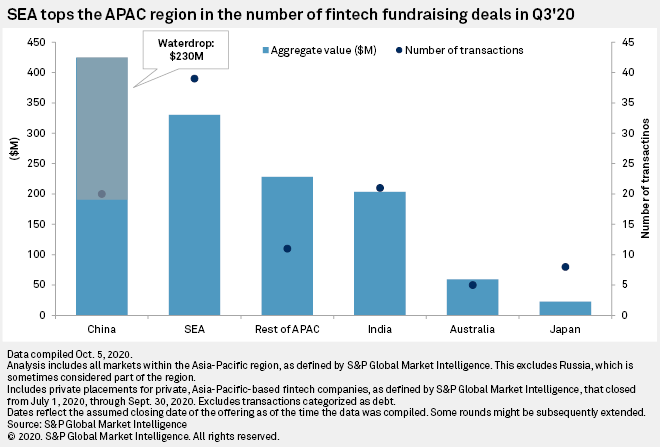 Beijing Shuidi Hubao Technology Co. Ltd., which does business as Waterdrop, is a healthcare-focused insurtech. Launched in 2016, it started with a crowdfunding platform and a mutual aid platform which has disbursed 1.7 billion yuan ($254.6 million) to over 14,000 users since inception. Members of Waterdrop's mutual aid plans contribute a nominal sum amounting to less than 100 yuan ($14.98) per annum to a pooled fund. Payouts from the fund will be made upon diagnosis of an eligible medical condition, permanent disability or death resulting from an accident. Waterdrop does not impose fees on donations raised through its crowdfunding platform but generates revenue by charging a commission fee of 8% per payout on its mutual aid schemes.

The mutual aid platform appears to be a customer acquisition channel for Waterdrop's insurance brokerage business, which was launched in 2017 and is said to be the firm's main revenue driver, according to CompassList. In a company survey, Waterdrop noted that nearly 40% of its mutual aid users are keen to purchase insurance products after subscribing to their mutual aid schemes. The brokerage unit is currently distributing more than 80 products from over 60 insurance companies and has seen swift growth. In the first half this year, the brokerage platform amassed close to 6 billion yuan ($892.3 million) in insurance premiums, which is roughly equivalent to the total premium gathered for the full year in 2019. The platform has over 100 million users, up from 12 million in June 2019.

Waterdrop's latest fundraising round is the largest raised by an insurtech in Asia-Pacific in the first three quarters this year and brings the firm's cumulative amount raised to $480 million. Its huge appetite for cash might stem from a high customer acquisition cost as it faces stiff competition from large Chinese internet companies. Ant Group Co. Ltd., Baidu Inc., Meituan Dianping, JD.com Inc., 360 DigiTech Inc. and Suning.com Co. Ltd. have all made their foray into the online mutual aid business in recent times.

Part of Waterdrop's new proceeds will be used to accelerate initiatives in medical and healthcare services, including the launch of a new service to provide members on its crowdfunding and mutual aid platforms with lower-cost medications and treatments. According to a Reuters report in August, the Tencent-backed firm is planning for an IPO in the U.S following its recent fund raise.

South Korea-based Viva Republica Co. Ltd., which operates Toss, garnered the second-highest amount in the region, with a $173 million raise that values the firm at $2.6 billion on a post-money basis. According to a Bloomberg News article in May, Toss is eyeing a public listing in Korea, Hong Kong, the U.S., or a combination of two of these destinations in the next 2 to 3 years.

Toss has its roots in peer-to-peer money transfer service but has since expanded its range of financial services to include electronic payments, credit score management, loans, insurance, investment and card offerings. The fresh funding is timely as Toss prepares to enter the banking sector. In late 2019, Toss was granted a preliminary approval for a digital banking license and is expected to begin its banking operations in 2021 if it gets a final nod from South Korea's Financial Services Commission. The payments company, which processes an average of 2 trillion South Korean won ($1.76 billion) of transactions per month, claims to be used by one-third of the South Korean population, with 49 million app downloads.

Insurtech rises through the ranks in the third quarter

Of the six fintech industry segments tracked by S&P Global Market Intelligence, insurtech was the only category that saw an increase in both funding value and volume during the third quarter. The subsector drew in the least capital investments in the previous period but claimed the No. 2 spot in terms of aggregate funding value in the most recent quarter, thanks to larger financing rounds by Waterdrop, Acko General Insurance Ltd. and PT. PasarPolis Indonesia. The three insurtechs cumulatively accounted for 88.7% of venture capital into the segment.

Acko general insurance is an India-based full-stack insurtech that was founded in 2016. Its recent $60 million series D round brings the firm's total amount raised to $205 million. During its fiscal year ending March 31, the firm issued 960,750 policies, more than 4x more than it had in the previous year. Revenues grew by nearly 11x to 602 million Indian rupees ($8.2 million). Despite its traction, Acko's bottom line is still in the red, and the company seems to be prioritizing growth over profits for now. The firm has earmarked its fresh funding for accelerating growth in existing markets, expansion into new product lines, scaling its technology and data teams, and investing in branding to acquire new customers.

Based in Indonesia, PasarPolis is an insurance brokerage that operates on a so-called "phygital" model, with both online and offline distribution channels. The insurtech has a network of 10,000 agents and plans to expand that to improve market penetration. The firm also plans to use its fresh funding to advance its technology to improve the ability to customize products for users. PasarPolis is currently distributing products from over 30 partners. In 2019, the firm said that it had issued more than 650 million policies to first-time insurance-purchasing customers. 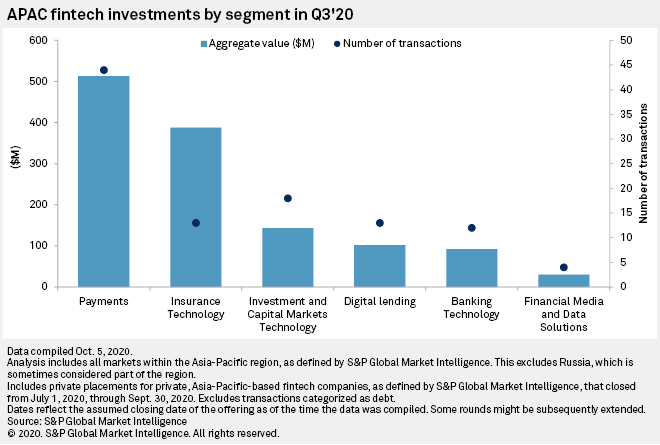 While investors may have tightened their purse strings, they remain open to new opportunities, most notably in the payments subsector. Over the first three quarters this year, at least 15 out of 23 large Asia-Pacific fintech funding rounds with transaction size of $50 million and above still saw participation from new investors. Seven of these transactions are in payment companies. Despite the ongoing uncertainties, these investors still seem willing to fund early-stage fintechs, with two-thirds of the transactions in series B or prior.

Nearly half of the large transactions with new investors took place in the third quarter, a promising sign that the funding environment for private fintechs in Asia-Pacific is on the mend. 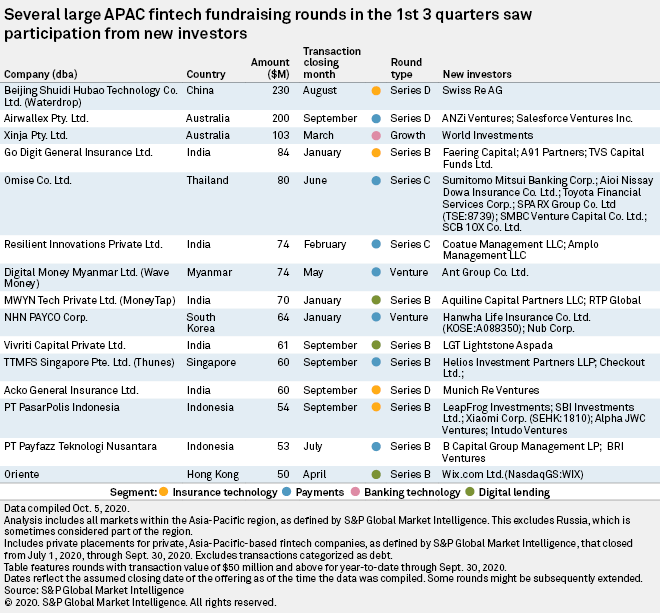 Robo-Advisors Catching on in China Industry Looks Poised for Growth