Private Equity and Venture Capital Firms Shared their Outlook for 2020


Private Equity and Venture Capital Firms Shared their Outlook for 2020

For the third year in a row, S&P Global Market Intelligence conducted an annual survey among global Private Equity (PE) professionals,[1] this time expanding its outreach to Venture Capital (VC) firms around the world. The study focused on 2020 investment sentiment, the main risks for portfolio companies, preferred investment strategies and exits, and how the PE community is approaching Environmental, Social and Governance (ESG) factors.

Last year was eventful for the global economy and financial markets. Key events included the US-China trade war, which aggravated the cyclical slowdown; anti-government protests in Hong-Kong; elections in Canada, Argentina and the UK; and Brexit, which dominated the European agenda throughout 2019.

In light of this, it is not surprising that investor sentiment regarding PE activity in 2020 grew gloomier as compared to the previous year. While on an aggregate level, 44% of respondents still expect the activity to improve, 20% of PE practitioners indicated the outlook would deteriorate in the coming months. To contrast, in last year’s survey only 14% of global respondents expected a deterioration of PE activity.[2] The US-China tensions and sluggish economic growth appears to have affected investor sentiment, particularly in Asia Pacific (APAC), where almost a third of respondents (30%) expect investment activity in 2020 to deteriorate. Moreover, the greater China investors are the most pessimistic of the bunch, with more than half (55%) anticipating the activity to deteriorate.

In the same manner, North American PE investors have also not been immune to the economic environment and have reacted accordingly: only 36% of them expect investment activity to improve in the coming months, a significant decrease from the 54% reported in the previous year. In contrast, in the Middle East and Africa (EMEA) region, the prospect of investment activity is looking brighter: 49% of the respondents anticipate the conditions to improve, a mindset only 34% of 2018’s survey participants shared. Within EMEA, thanks to the high availability of capital, the Central and Eastern Europe (CCE) region has the most positive outlook, with 69% of PE respondents expecting an improvement (Fig. 1). 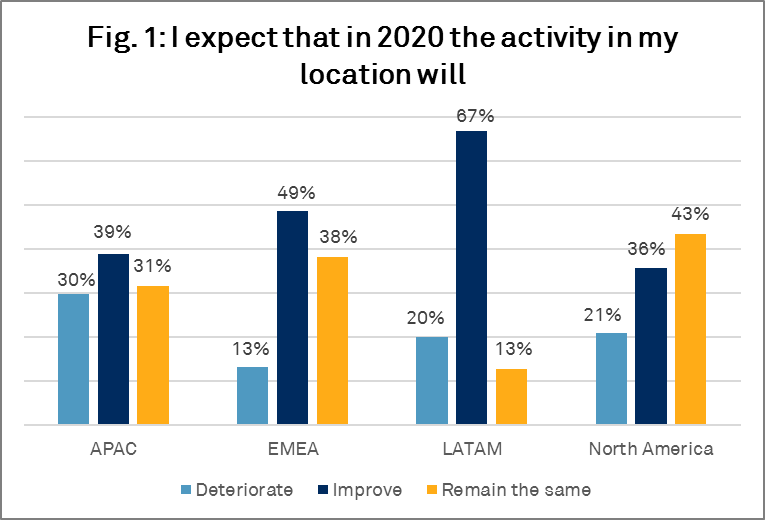 The final of the four leading regions–Latin America (LatAm)–maintains the most positive investors’ view: 67% of respondents are counting on improved investment activity this year. This expectation is in contrast with a regional backdrop of a weak business climate, low growth and uncertain domestic political dynamics.[3]

Considering the major political and economic events that shaped global financial markets in 2019, it is unsurprising that survey participants highlighted changes in the economic environment, political upheaval and protectionism as the greatest risks to their investments in the coming months. Issues related to the increased sanctions and tariffs have risen for the third year in a row: from 16% in 2017 and 28% in 2018 to 29% in 2019, affecting all regions as they continue to dominate the global economic agenda. Changing consumer behaviour remains a major disruptor for investors, with 24% of North American and 21% of EMEA respondents ranking it as one the top risk factors for their assets (Fig. 2). 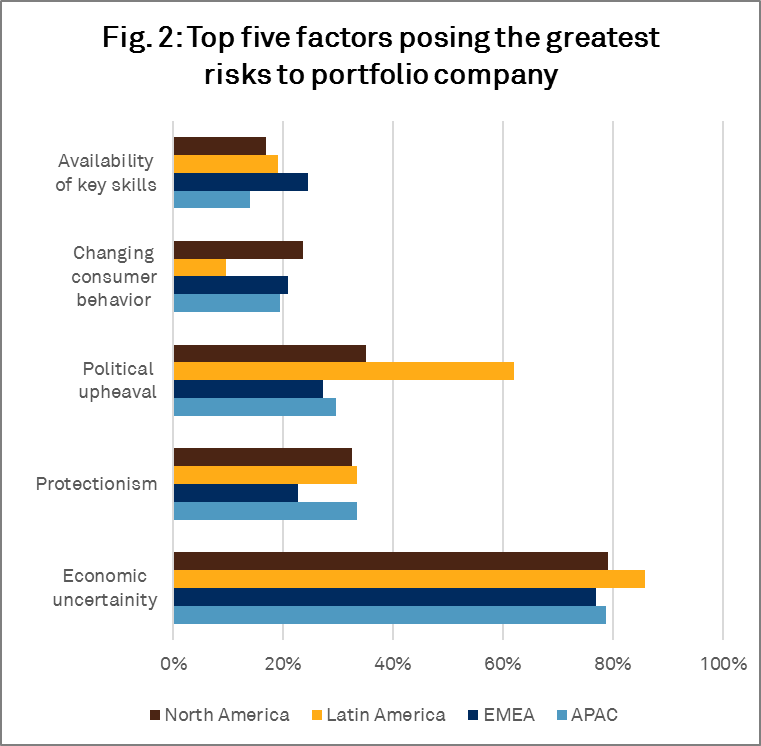 In addition, European respondents highlighted skill shortage and the talent drain as an area of concern, since demographic changes, the transition towards a greener economy and the ongoing digitalisation process have increased the skills gap in the region. Moreover, this is the second biggest area of concern for CEE investors (48%), after macroeconomic factors (76%).

Although, on aggregate level, the high speed of technological changes is viewed as a major concern, cyber-risk for portfolio companies remains a minor worry (7%). This is particularly surprising given that the latest global CEOs survey conducted by the consultancy firm PricewaterhouseCoopers, LLP (PwC) highlighted cyber threats as one of the top four risks to organisations’ growth prospects in 2020.[4]

When it comes to core investment activity, over half of the respondents (52%) intend to prioritize new investments in 2020, whilst further 22% will be focusing on managing their existing portfolio. The coming months will show whether this prediction will be supported by elevated deal making activity. According to S&P Global Market Intelligence, deal volume dipped 4% in 2019 on the previous year. In total, 15,202 PE and VC deals worth an aggregate $477.22bn were closed in 2019, down from 15,868 transactions, worth a combined $568.12bn, recorded in 2018 (Fig. 3). 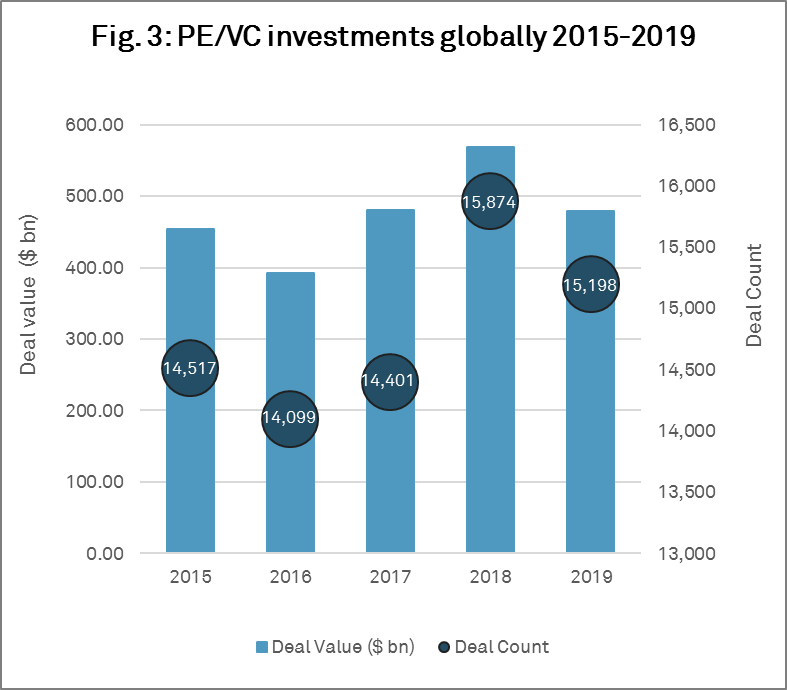 On aggregate, only 9% of respondents plan exiting investments in 2020, and this number varies significantly from one region to another. Only 13% of North American investors pledge to sell part of their portfolio assets in the next few months; in LatAm this number is as low as 2%, as survey participants expect to be primarily busy with making new investments (43%) and fundraising activity (33%).

With a colossal $1.4tn PE dry powder ready to be deployed, growing competition and soaring valuation multiples, investors are increasingly leveraging inorganic growth strategies and platform acquisitions to invest capital in a more efficient manner.[5] In last year’s survey, the largest appetite for add-ons was expressed by EU- and US-based respondents, 25% and 26 % respectively. This year, the percentage has increased even further, with 31% and 42% of respondents from these regions highlighting add-ons as their key execution item. According to S&P Global Market Intelligence, 2,680 bolt-on deals worth a combined €140.47bn were announced in 2019 in Europe, surpassing the total value of PE entry deals (€104.37bn).[6] At the same time, growth capital remains the dominant strategy for APAC region, with a majority (52%) looking to pursue it in 2020.

Looking at the core geographical focus for 2020, a clear picture emerges revealing that PE investors plan to deploy capital locally. As expected, almost half of the respondents from each region prefer to scout opportunities and invest in the region of origin. This number is even higher for LatAm, reaching 62%. Further, 20% of both APAC and North American investors indicated that they would source new opportunities further afield. It appears that higher valuations and better risk-reward ratio in markets outside the US are driving the leading North American investors, such as KKR, to focus on targets in Europe and Asia.[7]

This drift towards cross-border investments can be confirmed by S&P Global Market Intelligence data. According to the available information, the number of PE deals outside national borders in which a North American investor was involved – either as a single buyer or part of the consortium – grew by 28% between 2015 and 2019.

When it comes to industry focus for 2020, Information Technology (IT) has been identified as the number one sector for investors (54%). Healthcare (48%) and Industrials (41%) follow closely behind to round up the top three sectors of interest. In particular, PE investment into Healthcare has enjoyed a sustained upward growth trajectory. According to our data, PE investment into the sector has grown steadily over the last five years, standing at $75bn in 2019 compared to $44bn in 2015, as investors seek non-cyclical, recession-proof assets in areas that are highly fragmented (Fig. 4). 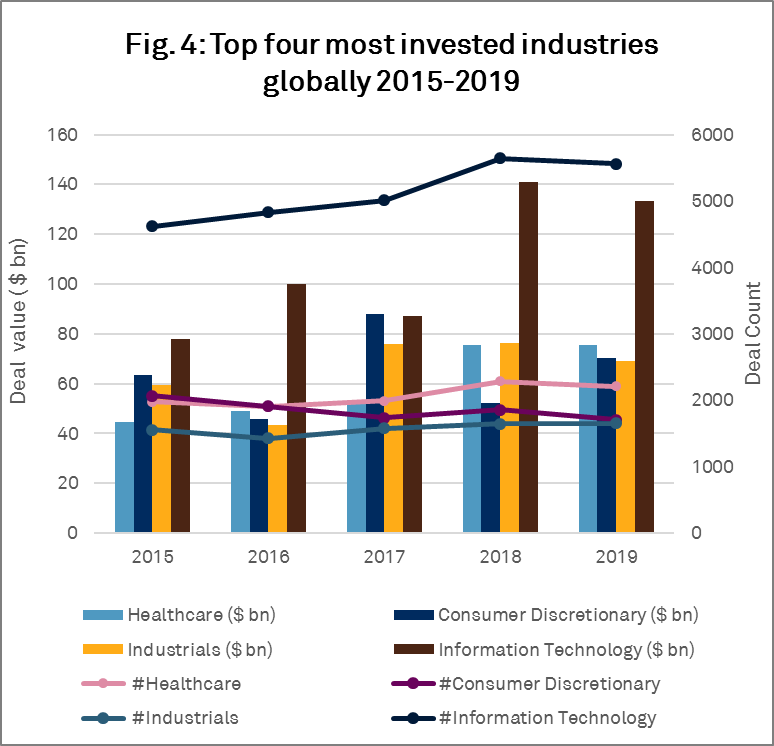 On the other hand, Consumer Discretionary appears to have lost momentum with only 30% of respondents planning to grow their exposure in the segment, as opposed to 33% in 2019. A notable exception to this dynamic is in the APAC region, where respondents plan to focus heavily on opportunities in Consumer Discretionary (48%) and Consumer Staples (43%). What is more, both sectors overtook Industrials (32%) as the sectors of preferred industry investment for the coming 12 months. For China-based investors this shift in sectoral preferences appears to be tied to the ongoing transition of China’s economy from manufacturing- driven to services and consumption-led.

On the disinvestment front our data shows that there were 2,779 exit transactions recorded in 2019, a decline of 18% on the prior year. Although generally exit activity slowed down, public debuts gained traction in 2019. Interestingly, at the end of 2018 survey participants indicated a growing interest in Initial Public Offerings (IPOs) as an exit route, an expectation that came largely to fruition for LatAm and APAC. Both regions recorded a significant uptick in sponsor-backed IPOs compared to 2018. Likely encouraged by positive momentum for public markets, APAC-based respondents stated that they would favour IPO over secondary sale as the second most preferred exit route after strategic M&A in the next 12 months, a view that was not shared by participants from other regions.  In fact, on aggregate one third of respondents from North America, EMEA and LatAm consider secondary sale as the preferred exit option, highlighting a continuing rise in the use of secondary market for liquidation purposes.

ESG Strategy is No Longer Optional

As we reported in the previous PEMS issue, PE industry has shifted its view of ESG factors to a means through which it can add value, rather than simply a way to mitigate risk.[8] In the survey we explored this topic further by asking participants to define their core ESG strategy going into 2020. On aggregate, over one third of the respondents are planning to improve ESG-related factors in their current portfolio this year and will seek investments in companies with a good ESG track record. In EMEA, 41% of PE respondents reported that they would continue integrating ESG factors in their investment and portfolio management process by complying with a new EU Disclosure Regulation for asset managers and investment funds related to sustainable investments. This would appear to confirm that the ESG agenda is at the forefront for the region,[9] in stark contrast to North America, where 31% respondents indicated that ESG factors are not currently considered. Perhaps the industry mindset will change in 2020, given that the biggest players have raised the bar in regard to incorporating ESG metrics into investment methodologies. As an emerging trend, APAC region has demonstrated the highest number of investors (42%) that expect to improve their ESG policies this year; the region feels growing pressure from international investors and aims to step up the implementation of ESG factors into the investment decision process.

This year will likely continue the trend of political and economic volatility and challenging market conditions that have coloured the investment landscape in recent years. As our survey results show, despite growing concerns over valuations and an increase in negative investment sentiment, capital continues to flow and PE firms are adjusting their activities to deploy the capital more effectively. This means leveraging inorganic growth strategies and further deal making into defensive sectors such as Healthcare and IT. To comply with the ESG adoption process led by institutional investors, the PE industry needs to continue incorporating socially responsible investing practices and demonstrate the financial value therein.

[1] In Q4 2019, we conducted an anonymous global PE/VC industry survey, asking the opinion of 582 PE professionals on the general outlook for the industry in 2020, deal activity, investment and exit strategies and their ESG approach. 29% of the respondents were senior level professionals. Geographically, 38% of respondents were from EMEA region, 33% from North America, 18% from APAC, and 11% from LatAm

[2]Outlook for 2019 from a Private Equity point of view. (As of 07/02/2020). S&P Global Market Intelligence. Retrieved from https://www.spglobal.com/marketintelligence/en/news-insights/research/outlook-for-2019-from-a-private-equity-point-of-view

[6]UK most active country for European Deals in 2019 despite Brexit Uncertainty. (As of 07/02/2020). S&P Global Market Intelligence. Retrieved from https://www.spglobal.com/marketintelligence/en/news-insights/latest-news-headlines/uk-most-active-country-for-european-pe-deals-in-2019-despite-brexit-uncertainty-56778032

[7] KKR: Best opportunities are outside the US. (As of 07/02/2020). PEI. Retrieved from https://www.privateequityinternational.com/kkr-best-opportunities-are-outside-the-us/