PayPal playing in the big leagues of India's digital payments


PayPal playing in the big leagues of India's digital payments

Despite its recent launch in the market in late 2017, PayPal's mobile payment service is already seeing strong adoption among older and higher-income consumers in India, according to Kagan's July 2019 India online consumer survey.

Indians are gradually embracing mobile money, with 56% of adult internet users in India using mobile phones for accessing bank accounts and/or making purchases at a retail store. Digital payment apps are at the forefront of this trend, allowing Indians to send money to friends, pay bills and buy goods online and offline conveniently with their phones.

Alibaba Group Holding Ltd.-backed Paytm was the clear favorite among digital payment apps, with 81% of respondents saying they use the homegrown app. Other payment apps used by survey respondents include Amazon.com Inc.'s Amazon Pay (India) Pvt. Ltd. at 52%, Google LLC's Google Pay at 48%, and Walmart Inc.'s PhonePe Private Ltd. at 40%. 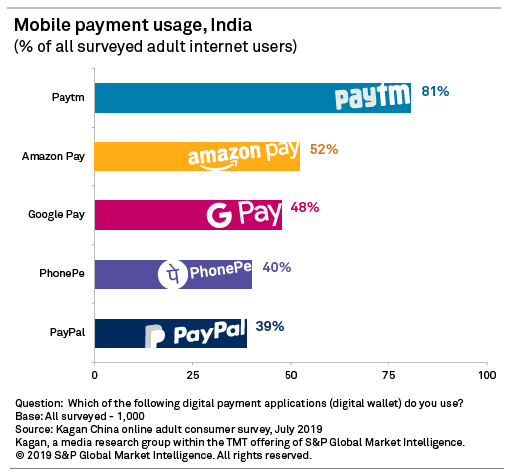 What stood out as particularly surprising was the popularity of PayPal in India. Although PayPal has been in the market for a while as a facilitator for Indian merchants accepting cross-border payments, it was only in late 2017 that the company started helping merchants accept payments from domestic consumers.

PayPal seems to have already gained decent traction among Indian consumers, with 39% of online adult survey respondents saying they use PayPal's payment app. That is a significant share for a payment app that neither offers a stored-value wallet nor facilitates the more popular interbank payments through the Unified Payments Interface (UPI) system.

The first is that account-to-account transactions dominate mobile payments in India, bypassing card network rails and obviating the need to top up electronic wallets. UPI transactions are growing faster than card payments. A direct comparison, however, is problematic because consumers use UPI apps mostly for peer-to-peer transactions, mobile phone account recharges and utility bills, while card usage primarily reflects payments for goods and services purchased from merchants.

UPI has also made nonbanks the main drivers of mobile payments in a country where card acceptance infrastructure is not widespread. Paytm, Google and PhonePe dominate UPI payments by offering feature-rich apps and digital transactions with cashbacks and rewards.

Finally, the UPI system has made banks a relevant cog in the machinery of digital payments and averted a China-like situation where the majority of mobile transactions occur through a pair of apps that offer stored-value wallets. In China, Ant Financial's Alipay and Tencent Holdings Ltd.'s WeChat Pay have cornered mobile payments, keeping banks out of the loop. In India, however, nonbanks have to team up with banks to offer UPI-based consumer apps.

Still, PayPal has a long way to go to catch up with dominant payment companies in India. Paytm, PhonePe and Google Pay drive consumer engagement by powering multiple use cases like prepaid mobile top-up and travel booking. PayPal, in comparison, offers limited payment features and does not facilitate peer-to-peer payments and bill payments in India. Its large network of merchants, however, appears to have helped it gain a foothold among consumers. 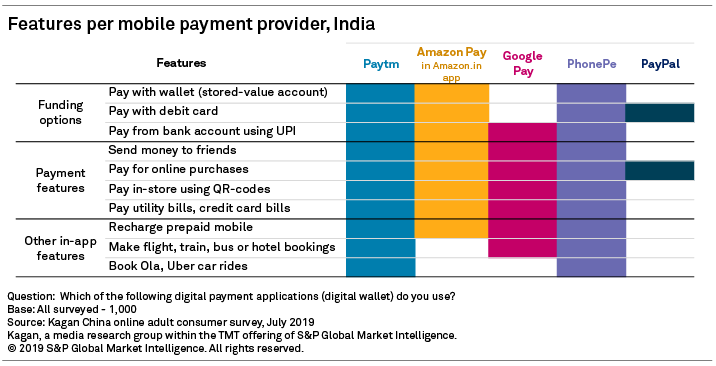 Demographics reveal how PayPal stands out from the other top five mobile payment apps in India. PayPal has the least proportion of young adults aged 18-29 and more users above 40. PhonePe appears to have the youngest users, with 46% of its users falling in the 18-29 bracket.

PayPal also appears to have the most affluent clientele, as its income distribution is skewed towards the higher end. Although the trend for PayPal users peaks at the same point as the trend for all respondents, it has another peak between 700,000 rupees and 1 million rupees that is not observed in the other four brands. Amazon Pay and Google Pay, on the other hand, peak between 500,000 rupees and 700,000 rupees. In contrast, PhonePe has the highest proportion of users in the lowest income brackets.

Android is the most popular operating system for smartphones among mobile payment users in India, and most users tend to keep their phones for one to two years. When asked about attitudes toward new technology, users of all five brands consider affordability and credibility as important factors before buying new devices. Paytm appears to have the fewest early technology adopters and the highest proportion of users not preferring change.

Social media usage is fairly consistent across the top five mobile payment systems for most platforms, with PhonePe and PayPal users reporting the highest usage rates. The exceptions are data-intensive YouTube, Instagram and Snapchat, plus Quora and WeChat, where Paytm users fared the lowest among the five brands.

PhonePe users have the highest engagement for finance-related smartphone activities such as using mobile payments at a physical store, accessing personal bank accounts online and online shopping. In contrast, Paytm users were significantly less likely to use their smartphones to check personal bank accounts. PayPal takes the crown for having the highest engagement in users purchasing entertainment and paid mobile apps.

Data presented in this article was collected from Kagan's 2019 Asia Consumer Insights survey. The online survey consisted of 1,000 adult internet users in India and was completed during July 2019. Data from the survey has a margin of error of +/-3 ppts at the 95% confidence level. Percentages are rounded up to the nearest whole number.