Offshore Wind Ready To Take Off In The United States

Energy
Offshore Wind Ready To Take Off In The United States

Offshore wind has been slow to develop in the US but declining costs and aggressive renewable mandates in several coastal states are turning the tide.

Jul. 20 2018 — As of the end of 2017, European countries have installed a total of just under 16,000 MW of offshore wind. The United States has installed 30 MW. For a country that ranks second globally in onshore wind installations with roughly 89 GW, why is it that the US is so far behind the curve in offshore wind? There are several reasons:

While it has been an uphill battle for offshore wind in the United States, there is increasing optimism for the industry to finally gain traction in the US energy landscape. The advantages of onshore wind are slowly eroding as costs for offshore wind continue to decline and developers find ways to make offshore wind economical while also keeping local residents happy. 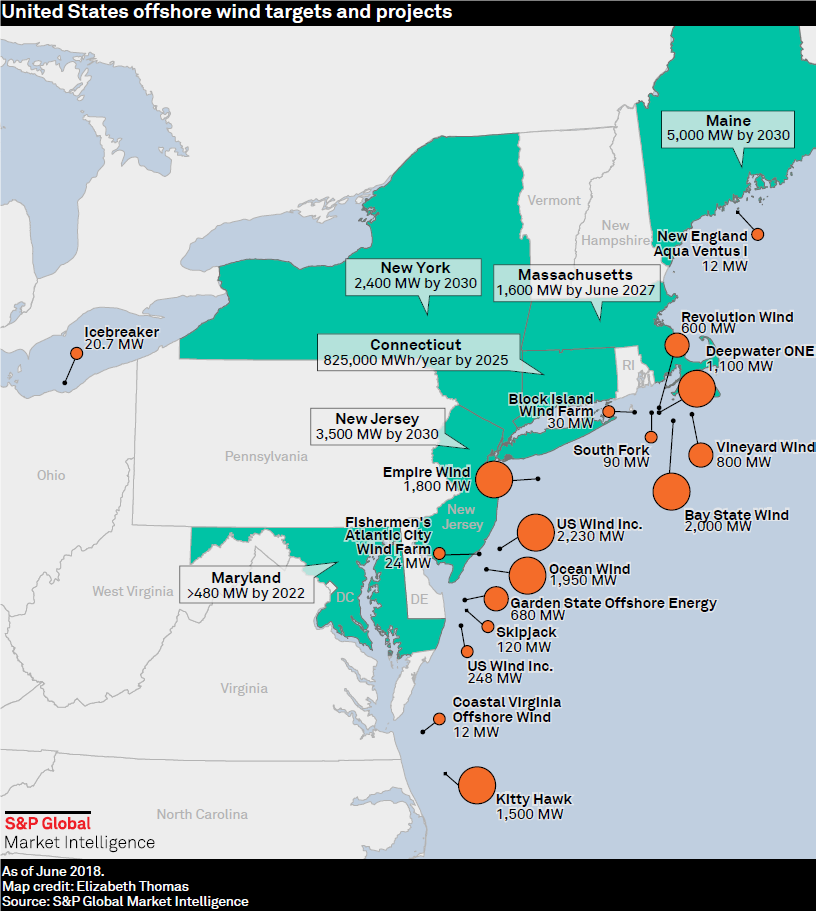 Land resources are abundant in many areas of the US, however many smaller, more densely populated states in the northeast do not have this luxury. These states, such as Massachusetts, Rhode Island, Connecticut, and Delaware also have aggressive RPS standards that utilities have to meet. With land being relatively scarce and expensive for large onshore wind and solar farms, offshore wind is a more realistic and appealing option. Further boosting the argument for offshore wind in these Atlantic states is that geographic factors are in their favor. Water depth, even at long distances from the coast, are relatively shallow making more economical grounded foundations an option. Wind resources are also excellent mainly along the central and northern coast.

In terms of cost, offshore wind remains a more expensive option than land-based wind farms, however the gap is slowly narrowing. Block Island, the only operating offshore farm in the US, is currently under a PPA for $.244/kWh which is roughly 3-4 times prices seen for comparable onshore renewables and natural gas. Two projects in Maryland, however, just recently signed deals at just over half the cost of Block Island and auctions in Europe have prices reaching almost grid parity. In 2017, winning bids for four offshore projects in Germany averaged $.054/kWh and the Netherlands currently has an auction out for 3.5 GW and is only open to bids that require no subsidies. Offshore wind giant, Ørsted which is establishing operations along the East Coast, reported a cost decrease of 63% from 2010 to 2016. Should these cost decreases translate across the pond in the US as they're expected, offshore wind will have a much easier time making economic sense.

Finally, the hurdle of the "not-in-my-backyard" opposition has a pretty easy solution: build farther from the coast. Cape Wind was sited only five miles off the coast of Martha's Vineyard and faced serious backlash from the local community. The average distance from shore of European offshore farms in 2017 however was roughly 25 miles, five times farther from shore than Cape Wind. Even in perfectly clear weather conditions, the tallest turbines in operation today would be almost impossible to see at this distance due to the curvature of the earth. While building an offshore farm this far from the coast has negatives including higher costs for connecting cables and electrical losses, they are not significant enough to outweigh the positives. Proposed offshore wind projects in the US have learned the lesson from Cape Wind and are planning to install turbines between 10 and 40 miles off the coast.

While these arguments against offshore wind are weakening, the impact will not be seen equally across all coastal states in the US. Virtually no offshore development is expected over the next 5-10 years in the Gulf of Mexico or in the Great Lakes. For Pacific states, there are several factors favoring offshore wind including very aggressive RPS requirements and excellent wind resources. However these states have very deep waters requiring floating foundations for offshore wind turbines which are currently more expensive and not as well understood in the industry as fixed-bottom foundations. Despite this, developers in California and Hawaii have proposed large floating offshore wind projects in the pipeline which aim to be built sometime before 2030.

The Atlantic Coast will by far, get the most attention for offshore wind development. Six states have an offshore wind target in some form. Massachusetts, New York and New Jersey have all set capacity targets of 1,600 MW, 2,400 MW and 3,500 MW respectively. Maine also set an offshore target of 5,000 MW back in 2009, however the state has failed to reach onshore wind targets in previous years and just recently the governor issued a moratorium on new wind development. The aggressive offshore wind target is a distant memory now with no major offshore projects planned. Connecticut and Maryland also have offshore goals in place but not in terms of capacity. Connecticut has issued an RFP to procure up to 825,000 MWh of offshore wind by 2025 and Maryland has a carve-up within its RPS for up to 2.5% of generation to come from offshore wind. These six states, along with Rhode Island and to a lesser extent, Delaware, Virginia and North Carolina are the states expected to see legitimate offshore wind installations over the next decade.

The United States has tried to get offshore wind going for well over a decade with a graveyard of proposed and subsequently canceled offshore projects. It's fair to be skeptical of any planned development due to the failure rate of such projects in the US. However, with aggressive RPS standards, legislation specifically calling for offshore wind and falling costs, there now appears to be legitimate momentum in the United States for offshore wind.