* The London Metal Exchange three-month, or LME 3M, nickel price closed September at $21,107 per tonne. The gains made earlier in the month were erased when prices fell following the U.S. Federal Reserve's Sept. 21 interest rate hike. 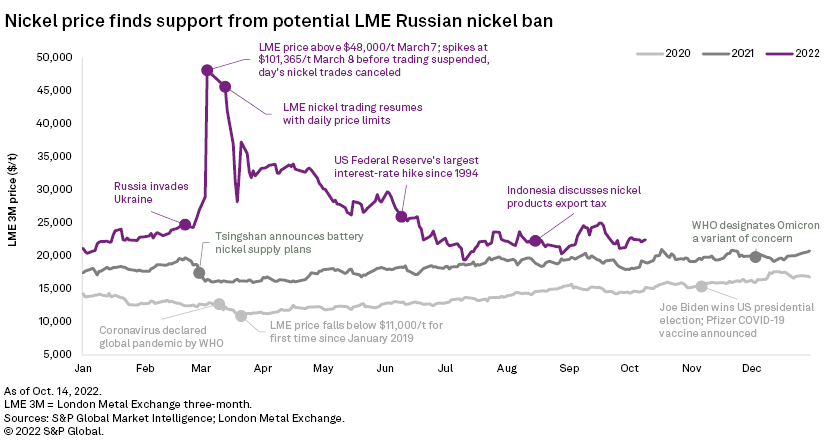 * The price has closed above end-September levels, however, in every trading day in October to date on support from news that the LME is considering a total ban on new Russian nickel being delivered into its warehousing network.

* Such a move could boost LME nickel prices, given that Russia is a major producer of LME-deliverable class 1 nickel.

* We have consequently lowered our global primary nickel demand growth rate for 2023 to 7.9% year over year from 8.3% in our September report.

* Indonesian nickel product output growth will help global primary nickel supply outpace demand again in 2023, according to our forecast, underpinning our expectations for the average LME 3M nickel price to fall to $21,000/t in 2023 from $24,819/t in 2022.

More than seven months since the dramatic nickel market short squeeze and trading suspension on the LME, the market is anxiously waiting for the results of a key consultation by the exchange. With the threat of rejected Russian metal being dumped into the LME's warehouses looming large, the exchange has launched a formal discussion on whether it should ban deliveries of such material into its sheds. The deadline for feedback on the issue is Oct. 28, the final day of the upcoming annual LME Week gathering in London. As LME Week represents a key part of the current "mating season" negotiation period, developments during the week are likely to give an indication of consumers' appetite for extending annual contracts with Russia's PJSC Mining and Metallurgical Co. Norilsk Nickel into 2023. If buyers decide to shun Russian-origin nickel for 2023, the LME may decide to ban new Russian metal from its warehouses. This could bolster nickel prices, which are currently being battered by macroeconomic headwinds.

The U.S. Federal Reserve's decision to lift its benchmark interest rate to a 14 year high Sept. 21 put dollar-denominated metals prices under renewed downward pressure, with the LME 3M nickel price dropping from $23,411/t Sept. 23 to $21,107/t Sept. 28 as a result. The price has closed above end-September levels, however, in every trading day in October to date on support from news that the LME is considering banning new deliveries of Russian metal into any part of its global warehousing network.

In mid-August, the LME banned Russian nickel exported before July 20 from its approved U.K. warehouses, after the U.K. government applied additional 35% duties on such material as part of sanctions against Russia. The exchange had, however, resisted calls to ban Russian nickel from all its global warehouses because Norilsk had yet to be sanctioned by the government. The exchange now appears to be reevaluating this stance on intensifying concerns that if consumers from markets now imposing sanctions on Russia refuse to accept Russian material for 2023 during the current mating season negotiation period, this could push Russian producers such as Norilsk to dump excess metal into LME warehouses as a last resort. As Norilsk is the world's largest producer of LME-deliverable class 1 nickel making Russia the second-largest class 1 nickel producer, behind only China, according to our estimates such a move by Norilsk could cause LME nickel stocks to rise from their current lows and so put downward pressure on LME nickel prices.

The LME recently announced that it has begun formal discussion on a potential ban on new Russian metal deliveries to its warehouses. The discussion paper included a series of possible options to address the matter, ranging from maintaining its current position to immediately suspending all new deliveries of Russian metal. While the LME wants to protect its system from the impacts of a potential flood of unwanted Russian metal, there is a risk that banning Russian nickel from its sheds could see a repeat of events in 2018 when the LME suspended deliveries of metal made by major primary aluminum producer United Co. RUSAL International PJSC and aluminum prices consequently spiked.

Although a potential ban on Russian metal is likely to be one of the main talking points during the upcoming LME Week in late October, the challenging macroeconomic environment remains a major issue for the metals markets. At the 20th Communist Party Congress in Beijing, the government insisted that it will persist with its zero-COVID policy, despite the strategy putting significant constraints on economic activity in the country, which is the top industrial metals consumer. U.S. consumer price index, or CPI, data also showed that while the U.S. annual inflation rate eased for a third consecutive month to 8.2% year over year in September, it exceeded the 8.1% rate the market expected. Furthermore, the U.S. core CPI, which excludes energy and food prices, increased 6.6% in September to its highest rate since August 1982. These figures suggest that the U.S. Federal Reserve will continue to lift its benchmark interest rate in the near term to fight inflation. The rising interest-rate environment was a factor behind S&P Global Ratings Economics' decision to lower its global GDP forecast for 2023 to 2.4% from 3.5% previously in its latest update; this would mean the second straight year of slowing global economic activity.

S&P Global Ratings Economics' revision to its GDP growth forecast contributed to a 102,000-tonne downgrade to our global primary nickel demand forecast for 2023. We nevertheless project global demand growth to accelerate to 7.9% year over year in 2023 from an expected 3.5% in 2022 as demand from the battery sector continues to expand rapidly. This higher growth will still be outpaced by a 9.4% year-over-year rise in global primary supply in 2023, according to our forecasts. We expect that production ramp-ups in Indonesia will continue to largely drive strong supply growth in 2023. We anticipate that this growth will also be supplemented by rising battery-grade nickel sulfate output in China, fueled by the arrival of battery-grade nickel sulfate intermediate products, such as nickel matte, from Indonesia. Indeed, Indonesia's exports of nickel matte surged 172.6% year over year to 142,781 tonnes in the first eight months, with most of the material being shipped to China. With Nickel Industries Ltd. a company affiliated with China's Tsingshan Holding Group Co. Ltd. recently starting nickel pig iron-to-nickel matte conversion operations at its Hengjaya nickel project in Indonesia, we expect Indonesia to continue to ship large amounts of nickel matte to China in 2023.

Based on our expectations of primary nickel supply rising faster than demand, we forecast the primary nickel market surplus to widen to 199,000 tonnes in 2023 from an expected 143,000 tonnes in 2022. We therefore expect the annual average LME 3M nickel price to decline to $21,000/t in 2023 from $24,819/t in 2022. The evolving LME-Russian nickel story could impact near-term prices, however. 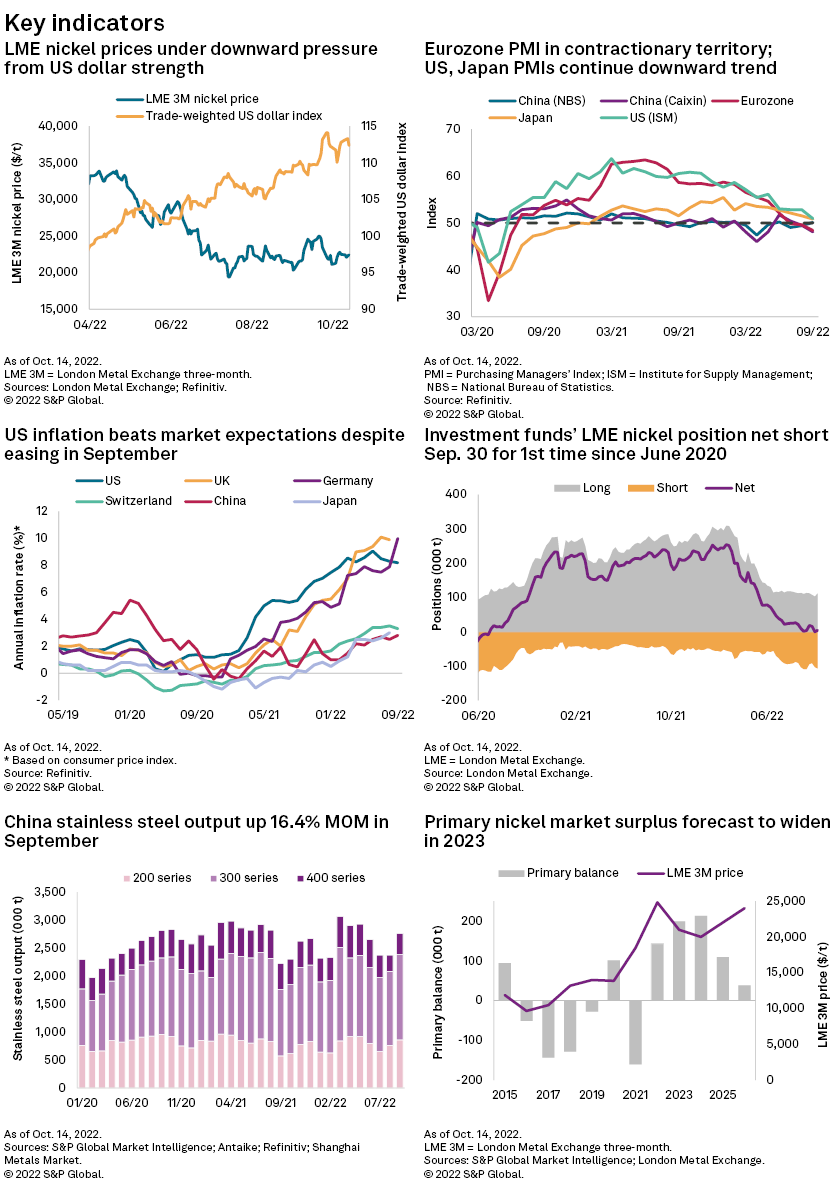