After shedding a little over 1 million paid subscribers in the first half of 2022, Netflix Inc. on Oct. 18 announced third-quarter results including 2.4 million net new global paid subs, marking a return to growth sequentially and for 2022 year-to-date. Although subscriber gains outperformed the company's prior guidance of an addition of about 1 million subs in the third quarter, an annual growth rate in subscribers of just 4.5% could reflect a new normal for Netflix as it grapples with maturing subscription video markets, increased competition and challenging economic conditions.

* Netflix's global paid subscriber base of 223.1 million as of the third quarter marked an all-time high for the company, but a gain of just 1.2 million subs over the first nine months of 2022 remains well below comparable past results.

* With subscriber growth slowing, benchmarks such as operating income, free cash flow and average revenue per subscriber could take center stage. All three metrics were positive in the third quarter when the impact of foreign exchange rates was excluded, with Netflix guiding for a total of $1 billion in free cash flow for full year 2022.

* The company's planned launch of a $6.99/month Basic with Ads subscription tier in November in the U.S. and 11 other major markets could support both subscriber growth and monetization efforts in the long run but is unlikely to have a material impact on 2022 results.

The 1.2 million gain in subscribers year-to-date has come entirely from increases in Asia-Pacific markets (which added 3.6 million subs through the first nine months of 2022) that offset small declines in the U.S. and Canada (1.8 million subscribers), Europe, the Middle East and Africa (500,000 subscribers) and Latin America (20,000). The company's guidance for the fourth quarter of 2022 is about 4.5 million net new paid subscribers added, which would push total global subs to just over 227 million. The seasonally strong fourth quarter coupled with the November launch of the ad-supported tier could push each region to subscriber gains for 2022 overall, although Asia-Pacific will likely contribute the vast majority of net new paid subscribers for the year. 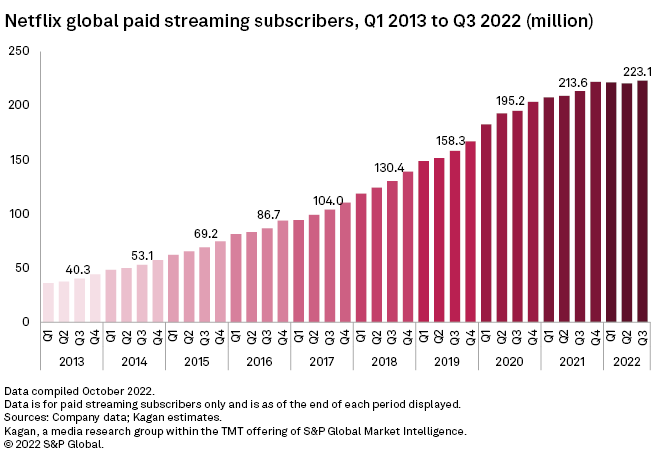 Netflix's paid global subscribers as of the close of the third quarter swelled by 9.5 million on an annual basis, the smallest annual gain in total subscribers in more than a decade. Some of Netflix's marked slowdown in subscriber increases in 2022 can be chalked up to outsized gains in 2020 and 2021 amid the peak of the pandemic as growth accelerated. Amid a "new normal" of much more sedate subscriber gains, annual growth rates in new subscribers will likely remain in the single-digit percentages and well off the approximately 20% to 25% annual increases achieved for much of 2018 through 2021. 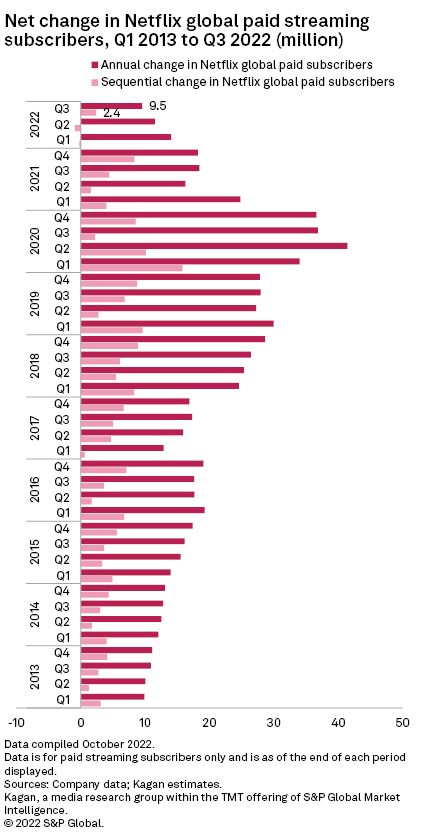 The new ad-supported tier and a planned early 2023 launch of options to monetize account sharing could boost ARPUs in some markets, but improving monetization over time will likely primarily be driven by Netflix's traditional approach of investing heavily in streaming content catalogs that can support regular price increases over time across most markets it operates in. 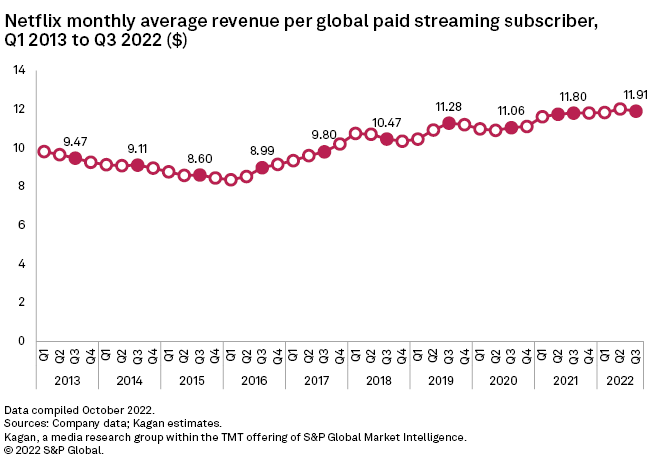 Netflix's business model requires investing billions into content, with success (and profits) stemming from its ability to grow total revenues at a faster clip than its cost of revenues and other expenses. While the company has signaled it may scale back content spend slightly and has embarked on limited layoffs and other cost-cutting initiatives, competing with the likes of Walt Disney Co., Amazon.com Inc., Warner Bros. Discovery Inc. and Paramount Global on a global scale necessitates heavy spending on programming, the cost of which makes up the bulk of Netflix's reported cost of revenues. 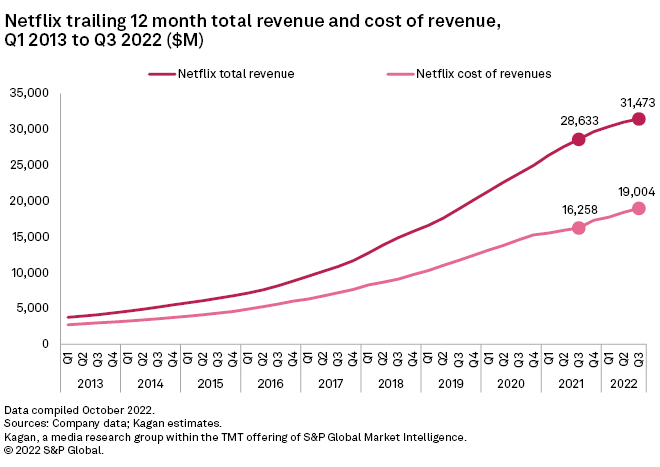 Netflix's commitment to a more tempered approach to content spend can also be seen, with free cash flow in 2022 remaining positive instead of dipping back towards 2018 and 2019 levels when subscriber growth remained its primary objective and generating operating income and free cash flow were secondary concerns. 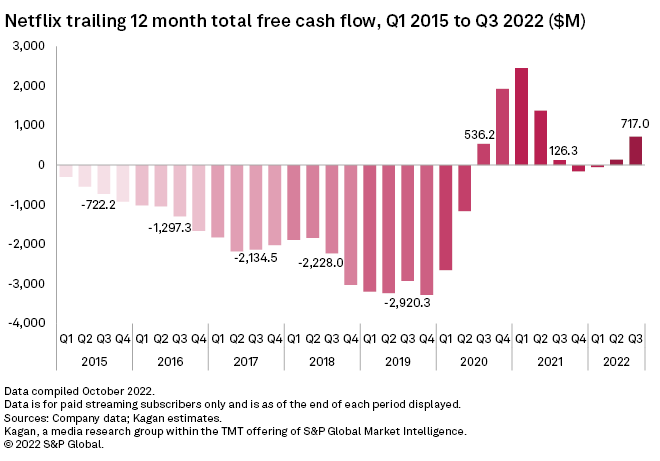 While the ad tier debut in November had no impact on third-quarter results, the tier's success or failure could have a huge impact on Netflix's prospects in 2023 and beyond. Kagan's September Consumer Insights survey of 2,528 online adults included several questions to gauge consumer sentiment toward a cheaper, ad-supported Netflix tier. Please note that at the time of fielding the survey, Netflix had not yet announced pricing or other details for its Basic with Ads tier, so questions asked of respondents were more general in nature. 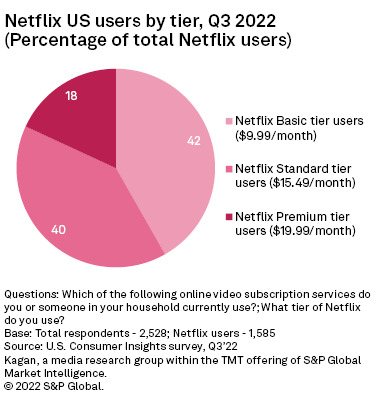 When Netflix users were asked whether they would switch to a plan with ads if they could save a few dollars each month, just over half of all Netflix users signaled they would. Basic tier users were the most interested in switching at 67% while interest was also strong among Standard tier users at 49%. However, note that respondents were simply asked about interest in switching to save a few dollars by watching ads. Standard or Premium tier users might be unwilling to drop all the way down to a Basic with Ads plan as it would limit both simultaneous streams available as well as impose downloading restrictions and remove other features. 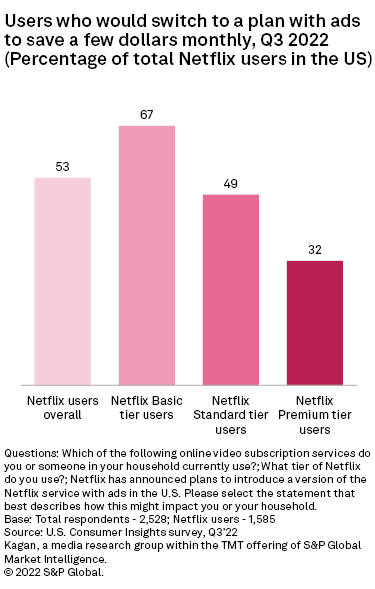 Among survey respondents that did not use Netflix, just over one-third said they would be more likely to subscribe to Netflix if the new plan with ads cost less than the Basic tier price of $9.99/month. Most respondents not using Netflix reported being unswayed by a cheaper price point, suggesting that early uptake in the U.S. for the Basic with Ads may come more from existing subscribers downgrading their plan than from new price-conscious users being tempted by the lower cost. 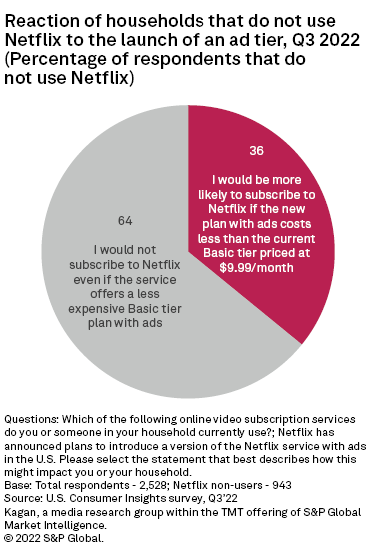