COVID-19 delayed deal-making across the insurance sector, but it did not derail activity.

The pandemic and related fallout may even provide new urgency for M&A as prospective buyers face new impediments to top-line growth and prospective sellers reevaluate strategic priorities or struggle to cope with the financial and operational realities of the current environment.

S&P Global Market Intelligence projects that aggregate full-year 2020 deal value for insurance carrier transactions involving buyers and/or targets in the U.S. and/or Bermuda, following a resurgence of activity in the third quarter, will slightly exceed the 2019 tally. Through the first nine months of 2020, aggregate carrier deal value surged to $13.20 billion, an increase of 107.6% from an unusually sluggish year-earlier period. Comparisons get far more difficult through the balance of the year as activity in the fourth quarter of 2019 of $13.81 billion marked the second-highest total for that period in at least the past decade. Statistics exclude targets in the managed care sector and terminated transactions. 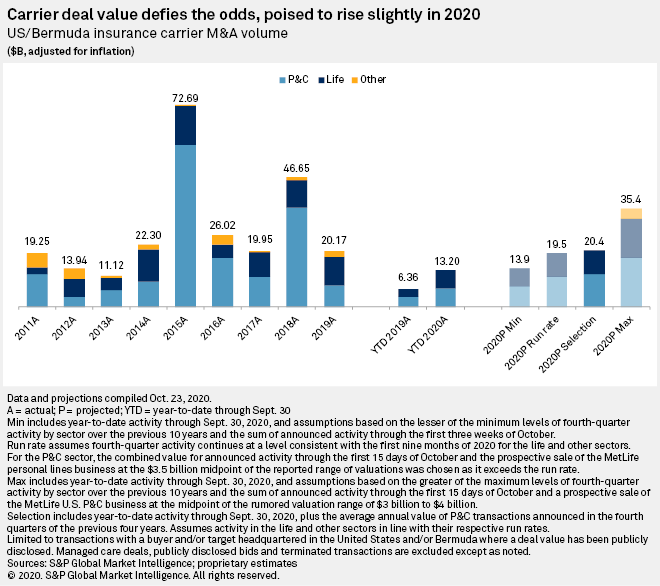 Developments such as Arch Capital Group Ltd.'s $538.1 million agreement to acquire the remaining outstanding shares of Watford Holdings Ltd., reports of MetLife Inc.'s potential sale of its property and casualty business at a reported asking price of between $3 billion and $4 billion and Assurant Inc.'s launch of a strategic review of the preneed business underwritten by American Memorial Life Insurance Co. and Union Security Insurance Co. provide reason for optimism that the full-year total can exceed 2019's $20.17 billion result. But nuances associated with deal structuring in the life and annuity sector may make the difference between growth and contraction.

Activity involving U.S. broker and agency targets, meanwhile, has slowed from the record-setting pace of the previous two years but is poised to make up some lost ground as the outcome of the forthcoming presidential election is likely to stimulate the supply of potential targets.

The number of such transactions slumped by 15.3% through the first nine months of 2020 following particular weakness in April and May. S&P Global Market Intelligence projects that activity for the full year will slide by only 10.1%, however, based on our expectation that potential sellers will push to close transactions by the end of December owing to concerns about the potential negative effects on net sale proceeds from long-term capital gains tax proposals issued by Democratic presidential candidate Joe Biden. 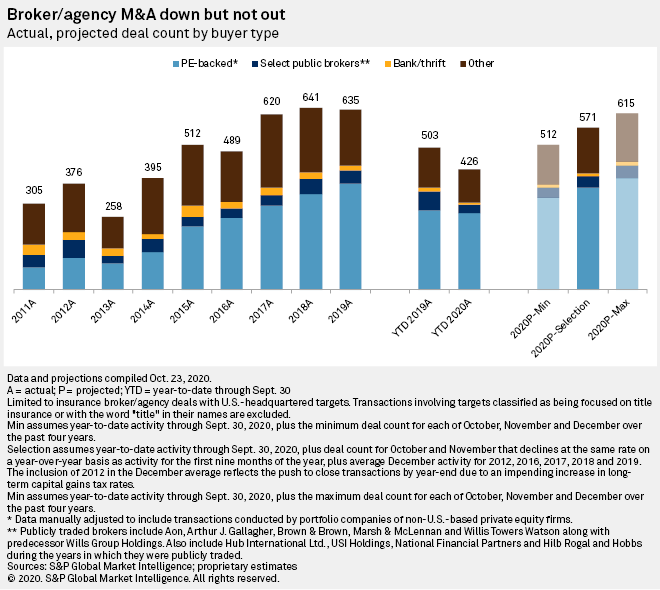 The opportunities and challenges presented by the current environment will serve as themes of the forthcoming S&P Global Market Intelligence 11th Annual Insurance M&A Symposium to be held virtually Nov. 12.

Regardless of the direction the pandemic takes, certain P&C and life and annuity companies face mounting pressure to increase capital and operational efficiency in an ultra-low interest rate environment. We expect this will create an impetus for the pursuit of varying kinds of inorganic activity on both the buy-side and the sell-side.

A series of actions taken in October with respect to in-force annuity business at American Equity Investment Life Holding Company and Equitable Holdings Inc. represent the latest examples of carriers seeking reinsurance solutions to transform their businesses. American Equity Investment Life, in unveiling its strategic partnership with Brookfield Asset Management Inc., eschewed an outright sale of the company — as Massachusetts Mutual Life Insurance Co. and Athene Holding Ltd. had proposed — in a deal that would have been worth $3.31 billion. Equitable entered what it billed as a first-of-its-kind reinsurance agreement involving legacy variable annuity business, potentially providing a path to other deals for similarly situated cedants.

Block reinsurance deals fit within the definition of inorganic activity, but the structure of the individual transactions determine whether or not S&P Global Market Intelligence consider them — and the related ceding commissions — as M&A. Given the frequency and magnitude of these deals in the current environment, these structure-related determinations may materially impact aggregate deal value statistics.

The 2020 total, for example, does not include the $1.23 billion ceding commission Athene paid in connection with its agreement to fully reinsure $26.72 billion of in-force Jackson National Life Insurance Co. fixed and fixed indexed annuity liabilities. It will, however, include the $300 million ceding commission that Venerable Holdings Inc agreed to pay Equitable for reinsuring the variable annuity business, since the cedant, unlike Jackson, is also selling a legal entity in the form of Corporate Solutions Life Reinsurance Co. The largest deal to date in 2020 across the P&C and life sectors took on a more traditional form. KKR & Co. Inc. agreed in July to an outright acquisition of Global Atlantic Financial Group Ltd. for $4.04 billion.

Both Jackson and the life and retirement arm of American International Group Inc. are due to be separated from their current ownership in the coming months, which could potentially serve as a catalyst for additional M&A and/or block reinsurance activity. Depressed stock valuations across the life sector, however, may limit the universe of willing buyers and sellers.

The P&C sector's most significant transaction, National General Holdings Corp.'s agreement to sell to Allstate Corp. for $3.73 billion, foreshadowed a growing push for consolidation in the personal lines space. Less than three months after that deal was announced, State Farm Mutual Automobile Insurance Co. agreed to the first insurance carrier acquisition in its history: a $400 million purchase of nonstandard auto insurer GAINSCO Inc. A potential sale of the MetLife P&C division, which includes personal auto and homeowners business, would perpetuate the theme. Commercial lines activity, meanwhile, may remain relatively subdued and focused on trimming non-core pursuits given the organic growth opportunities associated with strong pricing momentum.

Broadly speaking, current supply and demand dynamics should remain in place into 2021. And should the pandemic's effects linger beyond what the conventional wisdom holds, some carriers may find it increasingly challenging to remain independent.

Prospects for a more onerous federal approach to taxing long-term capital gains have long loomed as a potential catalyst for increased M&A activity among brokers and agencies. With polling suggesting an increasing likelihood of Democratic control of the executive and legislative branches, there may be greater urgency among potential sellers in getting deals done before the end of the calendar year.

The last time there was a significant adverse change in the long-term capital gains tax rate at the start of 2013, a race to the exits emerged among some agency owners. More deals took place in December 2012 than in any single month since.

Deal activity lagged 2019's record pace through the first nine months of 2020, reflecting a challenging comparison early in the year and dramatic reductions in activity in April and May amid fallout from COVID-19. But the emergence of a pull-forward effect reminiscent of 2012 is likely to narrow the gap through the balance of the year.

Our full-year 2020 outlook contemplates flat deal activity in October and November relative to the same months in 2019, then a near-doubling of volume on a year-over-year basis in December.

Brown & Brown Inc. President and CEO J. Powell Brown said during an Oct. 27 conference call that he observed the emergence over the previous six weeks of "increased interest in the possibility of doing things between now and the end of the year" due to capital gains tax-related worries.

The likely outcome is downward pressure on M&A activity in the first quarter of 2021. But the presence of an ever-growing number of private equity-backed brokers pursuing agency rollup strategies should create a floor for deal-making through the balance of the year. The disruptive emergence of direct-to-small business platforms and tech-enabled brokers may also favor consolidation among traditional players who lack the resources to compete as effectively.

Discover how we offer insurance companies a competitive edge