Average margins for miners of the major commodities will grow to 37% in 2019, increasing by US$13.7 billion from those expected to be achieved in 2018.

Iron ore will continue to have the highest margins both in percentage and U.S. dollar terms, at 42% and US$54.5 billion, respectively.

Copper miners are forecast to see the biggest increase in margins in 2019, with a year-over-year increase of US$7.7 billion that will push margins up to 40%.

Jan. 23 2019 — Average margins for miners of the major commodities will grow to 37% in 2019, increasing by US$13.7 billion from those expected to be achieved in 2018. Iron ore will continue to have the highest margins both in percentage and U.S. dollar terms, at 42% and US$54.5 billion, respectively. Copper miners are forecast to see the biggest increase in margins in 2019, with a year-over-year increase of US$7.7 billion that will push margins up to 40%. On the other hand, metallurgical coal operations are expected to see the biggest drop in margins in 2019 as a result of a forecast 14% year-over-year decline in the benchmark premium hard coking coal price. 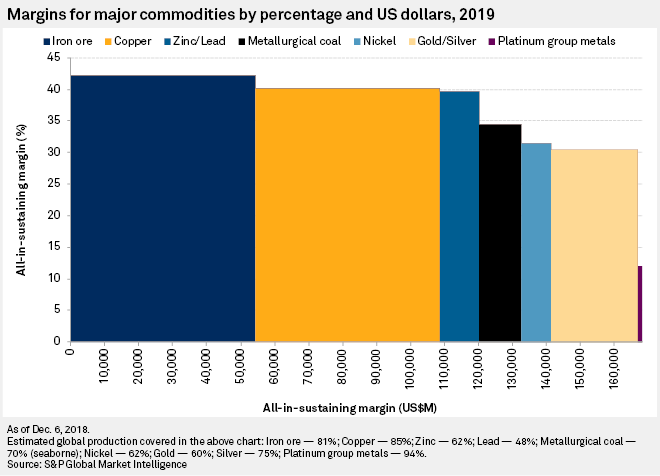 The above chart shows that in 2019, iron ore will remain the commodity with the highest margins, in terms of both percentage and U.S. dollars. This is on the back of a 5% year-over-year increase in gross revenue resulting from a 4% increase in iron ore produced, with a significant contribution coming from the ramp-up at Serra Sul while the 62% benchmark price is forecast to remain flat. This increase in revenue is largely offset by a 4% rise in costs resulting from local inflation, increased costs required to bring on additional production and an expected rise in fuel and seaborne shipment costs in 2019.

Margins at copper mines in U.S. dollar terms are expected to increase the most in 2019. This is driven by an 8% growth in gross revenue due to an expected 2% increase in the copper price in 2019, alongside a 4% growth in paid copper production. Higher copper production volumes are due to come from ramp-ups at existing operations, such as Kamoto and Toquepala, alongside additions from new projects expected to come online in 2019, such as Cobre Panama and Mirador. Costs at copper mines are expected to increase 2.5% in 2019 due to country-level inflation and some increase in fuel and freight costs. The focus for both copper and iron ore miners remains on maintaining operating cost and CapEx discipline to maintain margins. However, the increasing margins seen in copper this year and expected in 2019 may incentivize copper producers to increase production to grow revenue as prices — and margins — begin to increase. This can already be seen with the recent announcements of an expansion at Antofagasta PLC's Los Pelambres and Anglo American PLC approving the Quellaveco project earlier in the year, among similar moves by other companies.

Margins at the 314 gold and silver mines covered in this data are forecast to be at 31% in 2019, up from 24% in 2018, an increase of US$6.7 billion. AISC at these operations is expected to reduce by less than 1%, due to local currency weakness compared to the U.S. dollar, at multiple major gold-producing countries, offsetting domestic inflation. The forecast increase in margins is coming from an 8% growth in revenue at these operations. With gold price forecast to increase by less than 1% in 2019, this growth in revenue is driven by a 7% increase in gold production, which is largely due to increases in head grades. Average gold head grades at these mines are estimated to increase 4% year over year to 1.46 g/t in 2019, with notable increases expected at large operations including Mponeng, Porgera and Tropicana.

Zinc and lead mine margins are expected to grow in 2019 and be only slightly lower than those of copper. However, in U.S. dollar terms, the margins generated by zinc and lead mines will only be 21% of those generated by copper operations. The main driver of the increasing margins is a 14% increase in gross revenue. This will be a result of a 12% year-over-year increase in payable zinc production from these operations alongside a 3% increase in the zinc price to US$1.37/lb. The increase in production is due to higher production volumes expected from established zinc mines such as Mt Isa Zinc and Rampura Agucha alongside ramp-ups of new projects, particularly Gamsberg and Dugald River.

For metallurgical coal miners, we are expecting margins to reduce due to a forecast 14% year-over-year reduction in the benchmark premium hard coking coal price, which correlates with the expected 15% reduction in gross revenues. Mitigating this drop in revenue to some extent is a 4% decline in AISC, which is primarily due to a forecast weakening of the Australian dollar to the U.S. dollar in 2019.

With revenue, costs and margins expected to change by only small amounts, 2019 looks set to be similar to 2018 for nickel miners. Margins for nickel will reduce on the back of lower revenues due to a forecast 6% year-over-year drop in the nickel price partially offset by some minor increases to nickel and byproduct metal production; AISC in U.S. dollar terms, however, will rise due to the effects of domestic inflation.

Finally, miners of platinum group metals will continue to struggle in 2019. Although margins are forecast to increase to 12%, this only represents a year-over-year increase of US$122 million. This small increase is due to a forecast weakening of the South African rand to the U.S. dollar in 2019, leading to a 2% reduction in AISC for PGM miners, while gross revenue will remain flat due to little year-over-year change in either production volumes or prices of major PGM. Consensus forecast prices for palladium and rhodium may be raised should the recent price strength seen for these two metals persist into 2019.

Across all these commodities, we are expecting margins to reach over 37% and increase year over year by US$13.7 billion in 2019. This will be driven by a 4% rise in revenues alongside a 2% increase in costs. Should this additional profit come to fruition, miners will be faced with the decision of whether to reinvest it into their businesses or return it to shareholders.

Explorers Spent More Than Budgeted In 2017

Watch: Global Mining Industry Outlook - What Are the Expectations?