Lemonade IPO The Latest Sign Of Insurtech's Threat To Incumbents


Lemonade IPO The Latest Sign Of Insurtech's Threat To Incumbents

A string of U.S. insurtech developments in recent weeks demonstrates the continuing maturation of the sector and the increasing competitive threat it poses to incumbent property and casualty insurance carriers.

The most recent was Lemonade's June 8 announcement that it filed for an IPO. The New York-based homeowners insurance carrier has made no bones about its desire to shake up the industry and has explicitly named GEICO, State Farm and Liberty Mutual among its rivals. Should the offering be successful, it will provide Lemonade new sources of capital with which to compete.

The IPO filing was no surprise, as Lemonade had reportedly postponed doing one in 2019, but it seems early in comparison to software company IPOs of late. Lemonade reported $82.5 million in total revenues in the 12 months ended March 31, 2020, and the company was founded in 2015, making it roughly five years old. By contrast, the median last-12-months revenue for software and services companies, as classified by S&P Global Market Intelligence, that announced IPOs in 2019 on major U.S. exchanges was $151.6 million and the median age was 10 years.

The market reaction to Lemonade's IPO is still a long way down the road, but Lemonade has lined up bulge-bracket book runners for the offering, which we view as an early vote of confidence in the insurtech sector. If everything goes to plan, it will provide an exit for Lemonade's venture capital investors, which should lure more capital to the space, since it shows that private backers have a viable path to making a return on their investments.

The Lemonade IPO raises the question of whether other full-stack companies, such as Root and Metromile, will follow suit. The IPO could also lay the groundwork for Hippo, which like Lemonade focuses on homeowners insurance. Hippo actually outpaced Lemonade in 2019, generating more than $145 million in direct premiums written, versus about $116 million for Lemonade Insurance Co. One of the key differences, however, is that Hippo is a managing general agent, not a carrier, so those premiums were actually written by Topa Insurance Co. and Spinnaker Insurance Co. This is set to change, however, as Hippo announced a deal June 3 to acquire Spinnaker for an undisclosed sum.

In addition to companies that began writing policies out of the gate, there has been a distinct trend of P&C insurtech companies, like Hippo, transitioning from solely brokering policies to also assuming risk. Workers' comp-focused startup Pie was another recent addition to the list. The D.C.-based company said May 28 that it raised $127 million in a new round, with $100 million earmarked to purchase a licensed insurance company or start a new one.

As we wrote in our 2019 U.S. Insurtech Market Report and elsewhere, we think this trend will persist, as startups gain footholds in their markets, have access to more capital and increasingly want to apply innovation to the entire insurance process. In so doing, these companies will have greater potential to disrupt the incumbent insurance market down the road, since they will be competing head-on with other carriers. 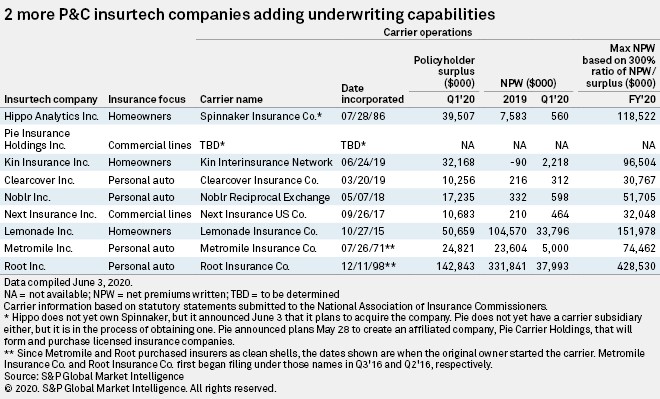 In general, we think the entrance of additional tech-focused underwriters holds the potential for more meaningful disruption to the insurance industry. It will allow them to compete directly with incumbent carriers, as opposed to just brokers, and it should lead to increased innovation in the functions that have traditionally been handled by underwriters

Outlook and Trends for European Insurers: Where do we go from here?