Investors are betting hundreds of millions of dollars on the financial technology players competing to deliver banking services in the U.S.

Neo-banks Varo Money Inc. and Moneylion Inc. each raised $100 million from investors, while Robinhood Financial LLC had the largest U.S. fintech private placement of the month at $323 million. The company behind the popular commission-free trading app is angling to provide more bank-like services to customers.

The payments and insurtech segments also saw some sizeable investments. In total, fintechs raised more than $1.21 billion in July. 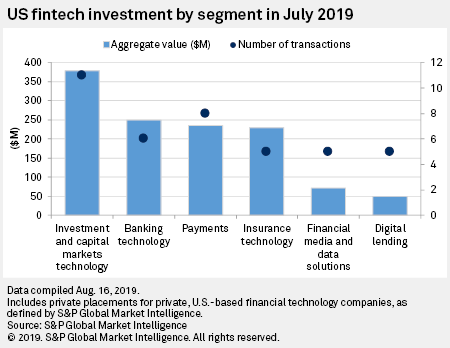 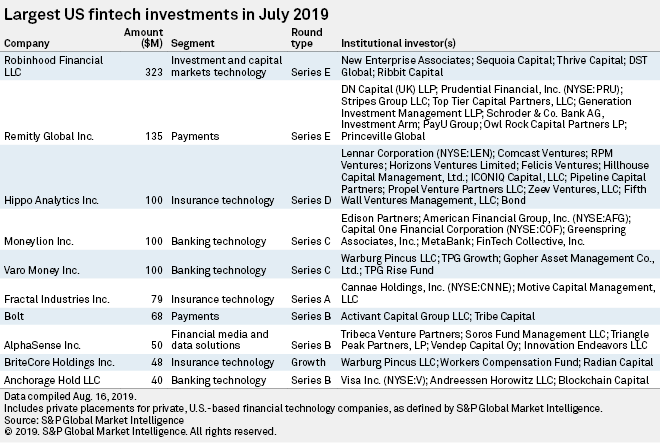 The "unbundling" trend that characterized the fintech landscape a few years ago continues its reversal. Prominent fintechs that started off on the fringes of banking, such as Social Finance Inc. and Square Inc., are seeking to offer a wider range of banking products to customers. Meanwhile, other fintechs formed to create digital-first banking services, also known as neo-banks, have also been gaining some traction.

Neo-banks tend to have limited or no physical presence, invest heavily in optimizing the digital user experience, and attract customers through differentiated pricing and services such as no-fee savings accounts or higher than average interest rates on deposits. Some neo-banks have their own banking charter or are subsidiaries of larger banking organizations, whereas others partner with chartered banks while they focus on attracting and managing the customer-side of the business.

Varo Bank NA could become an all-mobile national bank in the U.S. if it secures regulatory approvals. Varo in 2018 received preliminary approval from the Office of the Comptroller of the Currency to establish a de novo bank and is awaiting the Federal Deposit Insurance Corp.'s nod to move forward. The company must also file a bank holding company application with the Federal Reserve. It currently partners with Wilmington, Del.-based Bancorp Bank and had a user base of roughly 750,000 this summer.

Moneylion delivers some of its banking products through its partnership with Lincoln Savings Bank and has signed up about 4 million members. The company has not pursued a banking charter yet and refers to itself as a "financial membership." It earns revenue through selling membership subscriptions that give members access to a constellation of services, including savings accounts, wealth management, and lending services.

A recent survey of 4,000 mobile banking customers conducted by S&P Global Market Intelligence attests to the growing popularity of neo-banks or bank-like services offered by payment fintechs. Of the 501 respondents who indicated that they used a branchless bank or digital banking service, 25 marked Chime as their digital banking service provider.

1Debit Inc., which does business under the Chime brand name, recently crossed the 5 million registered customer mark. The popular neo-bank raised $200 million from a group of venture investors in March, which valued it at north of $1 billion. Chime, which partners with Bancorp Bank, might pursue a bank charter in the future, co-founder and CEO Chris Britt said during a CB Insights' Future of Fintech conference in New York.

Competition may be coming from abroad as well. Two of the most prominent neo-banks in the U.K. have announced designs for the U.S. market.

Revolut Ltd. has not yet launched an official U.S. product, likely due in part to regulatory constraints, but it had approximately 60,000 subscribers on its U.S. waiting list a year ago. The company has amassed a customer base of more than 6 million users mainly spread out across Europe. Monzo Bank Ltd., which has over 2 million customers, has also opened a U.S. waiting list.

While Varo Money and Moneylion were built from the ground up to provide holistic banking services to customers, some of the most prominent and well-funded neo-bank competitors in the U.S. are encroaching on the space from adjacent territories. Robinhood, a no-fee mobile brokerage service, is one such company.

Robinhood's December 2018 attempt to offer a product marketed as a checking and savings account failed after Securities Investor Protection Corp. said that its guarantee only covered funds used for purchasing securities, not deposits held as cash. The account would have offered an interest rate of 3%, higher than any other comparable offering at the time.

While the company was forced to quickly rebrand the product offering and retract some of its promises amidst heightened media scrutiny, the event marked a shift in its focus from being a user-friendly brokerage to a broad-based consumer financial services company. In April, the company filed for an official banking charter and FDIC insurance. If approved it will be able to provide a high-yield checking and savings account.

Robinhood is also pursuing an international expansion strategy. In August, the company received approval from the U.K.'s Financial Conduct Authority to open an online brokerage in the country.

Despite its regulatory faux pas, investors continue to find Robinhood's strategy compelling. The company raised $323 million from a collection of returning investors at a pre-money valuation of almost $7.3 billion.

The 10 largest transactions in July totaled $1.04 billion, accounting for 85.9% of the $1.21 billion raised by all fintechs in the month. Among these ten largest transactions, five were $100 million in size or larger, totaling $758 million between them.

Remitly Global Inc. raised $135 million in equity financing alongside an additional $85 million in debt capital. The company has built its business around helping immigrants send money back to their home countries for a flat fee via their online and mobile applications. The company currently services over 40 developing market nations and plans to service many more.

Hippo Analytics Inc.'s $100 million raise attracted a post-money valuation of $1 billion. The insurtech has quickly grown its presence in the home insurance market on the back of a highly simplified digital application process.

Fintech firms have raised $7.31 billion year-to-date with digital lending firms leading the pack. Digital lending companies have raised over $1.70 billion so far this year; digital lender Social Finance has raised the largest round of the year at $539 million in a transaction led by the Qatar Investment Authority. 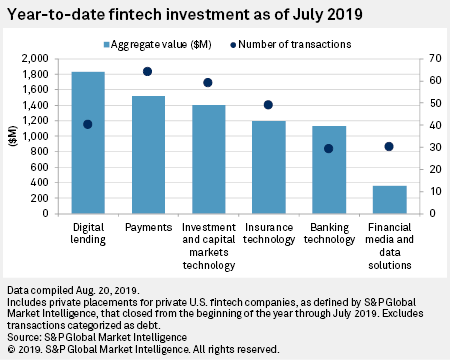