Is energy storage more economic than natural gas? It depends on the market


Is energy storage more economic than natural gas? It depends on the market

As power markets decarbonize, there is still a need for dispatchable, peaking power plants. Currently, most of this need is met by fossil-fueled units, but there could be opportunities for battery storage.

In California this past August, rotating outages were implemented because of capacity shortages. During these events, over 50% of the power on the California ISO grid was coming from natural gas-fired plants.

Earlier this year, the California Public Utilities Commission ordered load serving entities in the state to procure 3,300 MW of new resources by the summer of 2023, and California's State Water Resources Control Board granted a temporary exemption to regulatory deadlines that would have required 3,700 MW of natural gas-fired steam turbine units to retire or install alternate cooling systems that do not harm marine life. These actions were both designed to shore up system resource adequacy. New natural gas resources are not eligible to contract with load serving entities under the CPUC procurement order, but the S&P Global Market Intelligence Power Forecast indicates that new energy storage is more economical than natural gas-fired power plants, especially when it is co-located with solar. 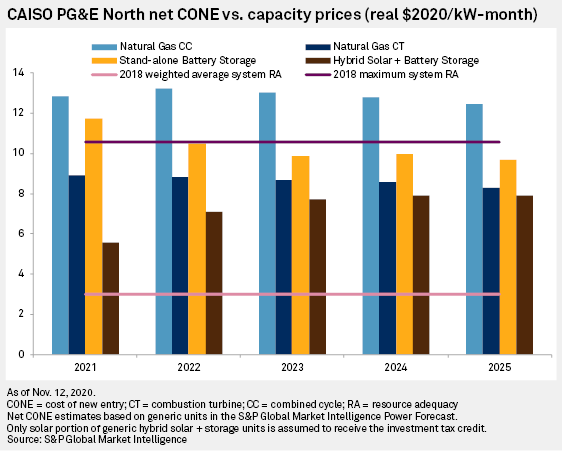 Despite having a much higher reserve margin than CAISO, PJM Interconnection has multiple states with aggressive renewable portfolio standards, or RPS. For example: 50% of retail electricity sales in New Jersey need to be procured from qualifying renewable energy sources by 2030. However, renewable energy has not grown in PJM as quickly as CAISO. The market still generates over half of its electricity from resources that emit carbon when operating.One of the core sources of value for battery storage in CAISO is energy arbitrage, taking advantage of the duck curve by buying power during the day when prices are low because of ample solar generation and selling it later in the day when the sun sets and electricity demand is still high. The market for system resource adequacy capacity contracts also appears ready to support the entry of additional battery storage and hybrid solar-plus-battery storage resources. Even before the current shortfall, capacity prices for system resource adequacy were in a range that would allow generic battery storage and hybrid solar plus battery storage resources to fully recover their net cost of new entry, based on estimates from the S&P Global Market Intelligence Power Forecast. 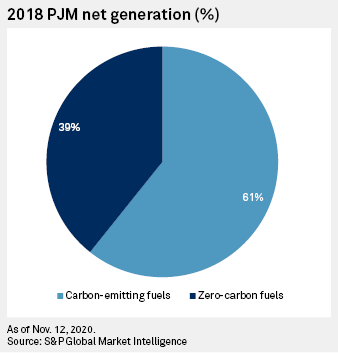 If new resources were needed, natural gas combustion turbines have the lowest net cost of new entry, based on estimates from the S&P Global Market Intelligence Power Forecast. Battery storage and hybrid solar-plus-storage resources in PJM East are projected to have higher capacity revenue requirements relative to CAISO despite similar estimated capital costs. This is because solar radiation in most of PJM is weaker than in California, so less solar capacity has been built. Lower solar generation reduces the opportunities for batteries to consistently profit from energy arbitrage, because the intra-day wholesale price volatility is lower.As New Jersey progresses toward its RPS, the S&P Global Market Intelligence Power Forecast projects that natural gas will remain relatively more economic for resource adequacy than battery storage. In contrast to CAISO, PJM reserve margins are currently far greater than the market installed reserve margin requirement and the S&P Global Market Intelligence Power Forecast expects that to continue for the foreseeable future. So, it is unlikely that additional resources beyond those already in development will directly be required for resource adequacy in PJM East.