Investments in private financial technology companies in Asia-Pacific grew 9.1% to $1.4 billion in the second quarter, though deal activity remained flat, with 107 transactions in both quarters.

While investor sentiment in Chinese fintechs showed signs of recovery in the first quarter, fresh outbreaks of COVID-19 cases may have spooked investors.

In the second quarter, payment companies maintained their lead in aggregate investments, with a total of $623 million raised. In particular, payment gateways supporting online transactions and e-wallets, which are likely to be more resilient in the current pandemic, saw larger funding rounds.

Investments in private financial technology companies in Asia-Pacific grew 9.1% to $1.4 billion in the second quarter, though deal activity remained flat, with 107 transactions in both quarters. Payment companies continued to draw in the most venture capital out of the six industry segments tracked by S&P Global Market Intelligence and, geographically speaking, investors cast their sights on Southeast Asia and Australia.

In the first quarter, India accounted for 42.9% of fintech investments in APAC but in the second, investors shifted their bets to other regions. Southeast Asian and Australian fintechs attracted $455 million and $371 million, roughly thrice and twice the amount raised in the previous quarter, respectively.

Meanwhile, fintech investments in India declined 38% to $339 million as the government continues to scrutinize and clamp down on foreign investments. India's recent ban on China-owned apps may further contribute to withering investments from prominent Chinese venture capitalists.

While investor sentiment in Chinese fintechs showed signs of recovery in the first quarter, fresh outbreaks of COVID-19 cases may have spooked investors. In the second quarter, aggregate fintech funding in China fell from $205 million to $41 million with the number of deals halved to 10. That said, funding levels can vary significantly from period to period. 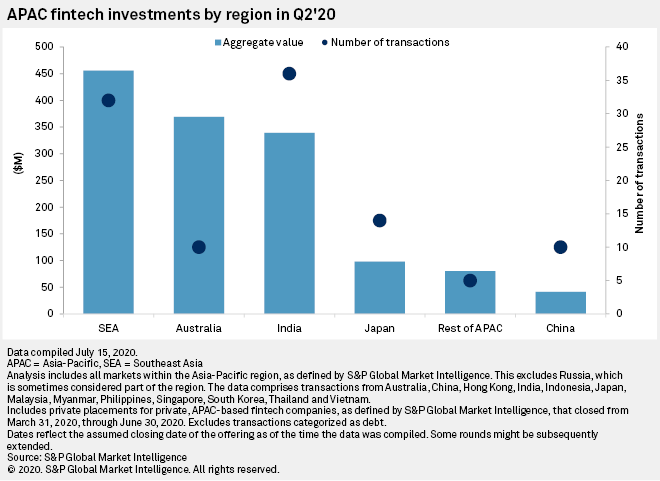 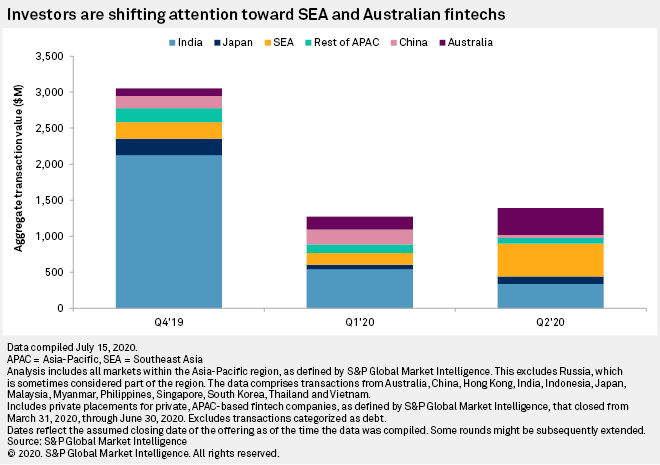 In the second quarter, payment companies maintained their lead in aggregate investments, with a total of $623 million raised. In particular, payment gateways supporting online transactions and e-wallets, which are likely to be more resilient in the current pandemic, saw larger funding rounds. 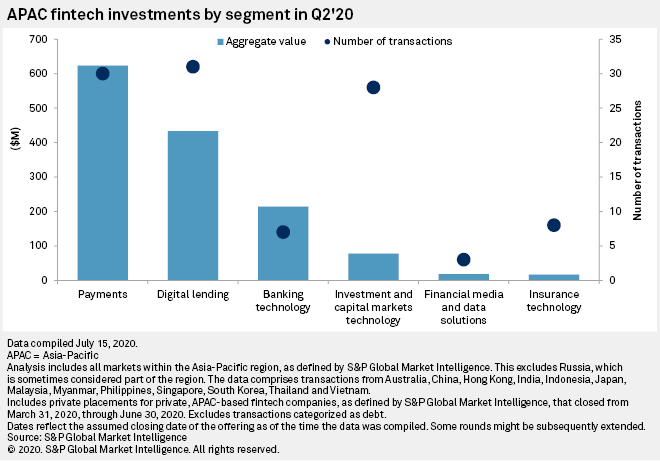 Payment unicorn Airwallex Pty. Ltd. topped the list with a $160 million series D round in April, which is its largest funding round to date and values the firm at $1.8 billion on a post-money basis.

The payment platform, which counts Chinese internet titans like JD.com Inc. and Tencent Holdings Ltd. among its clients, provides businesses with cross-border payment solutions, including payment collection, foreign exchange and payment distribution. Airwallex saw revenue growth of more than 500% in 2019, though it has yet to break even, The Australian Financial Review reported March 2.

Airwallex allows clients to receive payments from overseas in their preferred currency, with an eye to eliminating conversion costs. Recently, it added a WeChat Pay acceptance service in Australia, Hong Kong and Singapore, providing merchants with access to over 800 million WeChat Pay users. 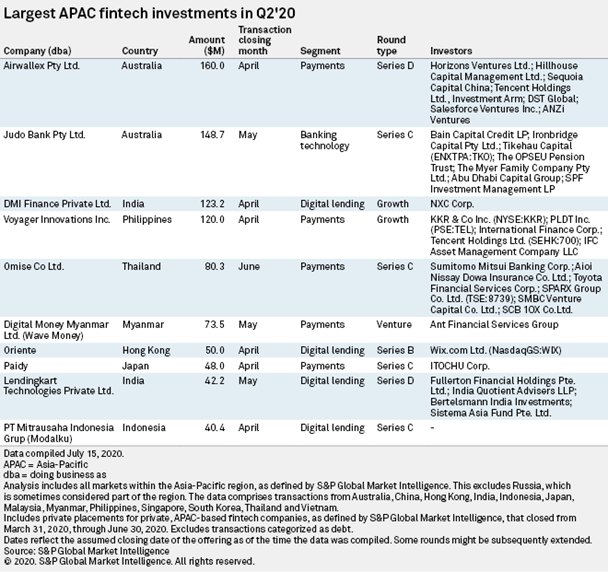 With the fresh capital, Airwallex is eyeing new markets like the Middle East and plans to expand growth in Europe and the U.S. It also intends to explore acquisitions in the payment space and further build out its product range to include payment acceptance capabilities.

Omise is also tapping into the development of instant payment schemes, offering PromptPay and PayNow options in Thailand and Singapore, respectively. These schemes enable consumers to make payments via their bank account, simplifying transactions and eliminating the need to key in card details at checkout. Users scan a quick response code with their mobile banking app and confirm the purchase to complete the transaction.

Southeast Asia-based e-wallets were a big draw for investors in the second quarter. The top two e-wallet fund raises were from Voyager Innovations Holdings Pte. Ltd., which operates PayMaya, and Digital Money Myanmar Ltd., which does business as Wave Money; together they accounted for 31% of investments in the payments sector.

Use cases for WavePay, the mobile wallet operated by Wave Money, include remittances, utility payments, airtime top-ups and digital payments. The e-wallet has over 21 million users and has been profitable since September 2018, two years after its launch.

Another noteworthy deal involving an e-wallet is Facebook Inc. and PayPal Holdings Inc.'s undisclosed investment in PT Go-Jek Indonesia, which operates GoPay, one of Indonesia's leading e-wallets. The deal will see the integration of PayPal's payment platform with Gojek, which will allow GoPay users to access PayPal's global network of over 25 million merchants.

With WhatsApp's payment push in emerging markets, Facebook's investment may also pave the way for the integration of the GoPay wallet into its messaging app in Indonesia. This transaction has not been included in the fintech deal count as Gojek is a ride-hailing app and therefore does not fall under our fintech industry segments.

Fintech investments into Australia were once again led by digital banks. Small and medium enterprise-focused Judo Bank Pty. Ltd. closed a $148.7 million series C round in May. The bank has raised A$770 million over three funding rounds with the latest transaction lifting its valuation to A$1 billion, earning the bank the coveted unicorn status.

Judo Bank, which received its banking license in April 2019, is among the 44 approved lenders to participate in the Coronavirus SME Guarantee Scheme and received A$500 million from the government to lend out to SMEs. As of June 2020, the bank has amassed A$1.4 billion in deposits and has a loan book of A$1.8 billion.

Other Australia-based digital banks that saw funding include retail-focused 86400 Pty. Ltd., which closed a $21 million series A round in April, and Xinja Pty Ltd. with a A$10 million round.

Australia went live with open banking in July, which was part of a broader piece of consumer data rights legislation. In the initial phase, the four major banks — National Australia Bank Ltd., Commonwealth Bank of Australia , Australia and New Zealand Banking Group Ltd. and Westpac Banking Corp. — will be subjected to product and consumer data sharing obligations with accredited data recipients, upon customer's request. Other authorized deposit-taking institutions are expected to participate in the directive next year.

Open banking may be beneficial to digital banks, as having access to users' deposit and transaction data, with their approval, could enable the virtual banks to develop more innovative and tailored offerings. Further, data portability could reduce friction in switching banking providers, which may promote user acquisition for digital banks, enhancing competition in the banking sector. The four large incumbents are already facing below-average deposit growth; between June 2019 and June 2020, the four banks saw an average growth rate of 5% in household deposits, half the banking industry's growth rate of 10%.

Despite securing investors' commitment to funding, cash disbursements may not be timely. Xinja Bank, which topped the list of fintech investments last quarter, had to raise another A$10 million in May after facing delays in receiving capital from World Investments.

Xinja had initially indicated in the deal announcement in March that A$160 million out of the committed A$433 million was invested immediately but subsequently revealed in its community forum that the funds have not been received, citing slowdown in regulatory approval caused by COVID-19.

Xinja's funding delay also has us wondering if this may be a prelude to more deferred investments, which may be a worrying sign of limited partners defaulting on capital calls from venture capitalists amid looming uncertainties.

Read the full article on the Market Intelligence platform.