In August 2022, U.S. Congress signed into law the Inflation Reduction Act, allocating $369 billion for climate spending and energy security in the form of tax credits and research and development dollars — the largest climate investment to date by any administration. Energy and climate initiatives made up the bulk of the legislation, although other provisions included healthcare and tax reforms.

The bill aims to bring the U.S. closer to its greenhouse gas emissions target — 40% below 2005 levels by 2030 — through investment in clean technology. Lowering costs associated with going green for the individual home or business consumer should also accelerate the adoption of clean energy home technologies. Certain technologies will be critical in facilitating the energy transition. These include heavy doses of IoT infrastructure and applications, low-latency analytics, digital twin energy modeling and connected machinery.

Incentives for clean energy technologies could alter existing energy-intensive operating models in favor of greener alternatives and spur product and industry development. While the impact of the Inflation Reduction Act, or IRA, will be felt most directly by vendors in the energy and utilities sectors, significant residual effects will be distributed through manufacturing and transportation, as well as in cities. The targeted investments and incentives of the IRA will add vitality across the green ecosystem, which should spur additional IT and IoT spending.

The IRA bill's specific target objectives for climate change and energy security broadly aim to lower the cost of clean energy and boost U.S. energy security and domestic manufacturing capabilities while focusing funding on historically disadvantaged communities and building rural resilience. This section will highlight some of the tax credits outlined in the bill, focusing on energy transition and sustainability.

Subsidies for clean energy technologies like hydrogen, nuclear, carbon capture, utilization and sequestration will spur development in those areas, all of which are enabled by significant investment in supporting technologies. Most centrally, greenfield deployments of new clean tech and brownfield upgrades of existing energy and power systems all rely heavily on collecting and analyzing data from machines, sensors and processes — in turn spurring deployment of network, storage and compute infrastructure and edge-to-cloud. IT vendors already have enterprise sustainability and environmental, sustainability and governance initiatives in their sights as critical new drivers of demand. 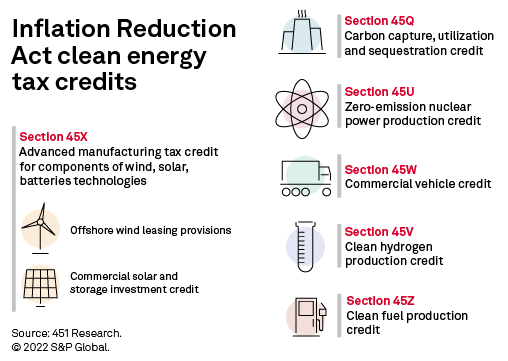 Lowering energy costs in the home. In a 451 Macroeconomic Outlook Survey, almost half (45%) of respondents cited energy prices as a threat to their personal finances. The IRA's direct consumer incentives aim to subsidize energy upgrades, including $9 billion for consumer home energy rebate programs for retrofitting and purchasing new electric appliances. For individuals who purchase a used clean vehicle with an American battery, a $4,000 tax credit will be allocated, which jumps to $7,500 for new clean-energy vehicles. An additional $1 billion will be allocated toward grants for energy-efficient affordable housing.

Facilitating the energy transition through investment in clean energy infrastructure. Through tax credits, the IRA backs the policy commitment to onshoring clean energy manufacturing to support energy reliability and production. The tax credits allocated to domestic energy include:

* $8 billion allocated to the Clean Hydrogen Tax Credit for hydrogen production projects. Production facilities can receive credits ranging from 60 cents/kg as base credit, which climbs to $3/kg if prevailing wage, apprenticeship and hour requirements are met for workers.

* For nuclear energy, the zero-emission nuclear power production credit supports the continued proliferation of nuclear as an energy source; with a base credit amount of 30 cents/kWh of energy produced, the allocation climbs to $1.5/kWh if wage requirements are met for workers.

* A revised Carbon Capture, Utilization and Sequestration credit updates previous legislation around minimum tons captured for reimbursement and cost per ton. Companies can now receive $180 per ton of carbon captured, nearly quadruple the previous rate of $50 per ton. Previous policy required companies to capture a minimum of 100,000 tons to receive the credit. The IRA lowers that minimum to just 1,000 tons.

Securing domestic manufacturing capabilities. $30 billion will be allocated to advanced manufacturing production for companies involved in the production of components for solar energy, wind energy, inverters, electric vehicle batteries and any critical minerals. To build energy generation capacity, an additional $10 billion credit will be allocated to cover up to 30% invested in building or upgrading a factory that manufactures clean energy components.

Environmental justice priorities are centered on equity and climate capacity building. With incentives centered around the equitable implementation and investment of $60 billion in federal funds, most tax credits are enhanced when applied to low-income or historically disadvantaged communities. For example, solar and wind facilities placed in low-income communities can receive up to a 20% bonus on top of the original credit awarded.

To bring about the energy transition, massive amounts of data must be collected, analyzed and made actionable to optimize and facilitate the shift and integration of clean energy alternatives into energy exploration, power generation and electrical distribution and use. From developing and improving these technologies in production to seamlessly integrating them more deeply into the grid and related ecosystems — such as electric vehicles and charging stations in the transportation sector — IoT, artificial intelligence/machine learning and other disruptive technologies will play a key role.

Connected machinery will support equipment optimization and maintenance. Digital monitoring via sensors and the collection of machine data offers remote insight into operations and productivity in near-real time, providing faster reporting times and response. When this data is combined with AI/machine learning analytics, predictive maintenance can resolve equipment issues before they occur, while more predictive and demand-matching operations can optimize the energy value chain. In a fragile energy generation environment like a nuclear production plant, for instance, granular monitoring and management can enhance power generation and automate processes such as adjusting oxygen levels in production.

New cloud and edge infrastructure will support analytics and workload execution for IRA-subsidized technologies. Power plants and distribution systems generate massive amounts of operational data, regardless of their energy source. Capturing this data is one thing, but turning it into something actionable requires heavy doses of cloud and edge infrastructure. Utilities, industrial companies and the entire auto/transportation industry — to name a few energy-heavy sectors — require new edge infrastructure to support decision-making that is low latency and near-real time, as well as growing amounts of core datacenter and cloud capacity to store and aggregate data for long-term planning and forecasting.

Digital twin technology offers a virtual environment for designing, developing and optimizing various green processes — from clean energy generation to smart grid distribution systems to electrified vehicles. Visualizing complex processes and modeling outcomes related to components and chemical reactions can support the exploration of solutions in a low-risk digital environment. By testing out multiple processes for nascent clean energies in the production phase, digital twins can support decision-making and speed up process development. Electric and increasingly autonomous vehicles can be tested and validated via digital twins versus costly on-road testing, speeding development and new vehicle and service launches.

AI/machine learning will be key in facilitating energy supply and demand in smart energy grids. Smart grids, which provide automated alarm, maintenance, monitoring and control of transmission and distribution infrastructure, have already been implemented by 39% of utility respondents to a 451 Research IoT and OT perspective survey, with an additional 33% interested in implementing the technology in the next two years. Smart grids differ from traditional grid technologies in their connectivity and integrated communication technology. As renewables and other distributed energy resources integrate with the grid, smart grids use AI/machine learning to promote adaptivity, resilience and predictive insight. Learning about energy supply and demand and responding to sudden changes will become increasingly important as bidirectional power flows and vehicle-to-grid interactions become more common.

Credits for fleet electrification, electric vehicle supply equipment, or EVSE, and individual tax credits for EVs are among the IRA's allocations for the transportation sector, which is often pointed to as one of the highest emitting sectors. The IRA aims to support widespread electrification by incentivizing consumer and commercial adoption of EVs and EVSE. To support a national network of reliable chargers, which is routinely cited as essential for adoption, the IRA raises the tax credit available for commercial entities that install chargers to either $100,000 or 30% cost per charger, whichever is less.

The IRA also offers a tax credit of $40,000 for commercial electric vehicles weighing more than 14,000 pounds. While the credits could have an impact, there is debate about their effectiveness compared to other incentive programs. Rather than a back-end tax credit or rebate, vouchers, for example, can offset the initial capital cost of buying electric vehicles or chargers, thereby incentivizing businesses to take that leap toward incorporating EVs into their fleets.

Only one in four commercial transportation companies said they have either deployed electric vehicles or plan to within the next two years, according to our IoT survey. That is a lower deployment rate than for any other IoT and digital transformation project — despite those same organizations saying that electrification would have the highest impact on their overall business. Fittingly, cost is a top hurdle to EV adoption in transportation, with about one-third responding that lack of budget is an inhibitor to IoT initiatives. Only security concerns and integration issues were cited more often.

As cities and states create and update their climate plans and programs, aligning local energy transition goals with new funding opportunities could amplify efforts' scale and impact. While the public sector is not the target of most IRA investments, public-private partnerships and collaboration could incentivize private sector investment in building out clean energy plants, energy-efficient buildings and more. Cities and states can also benefit from job opportunities in burgeoning clean energy sectors, with funding available for repurposing or upgrading brownfield coal, oil and natural gas sites.