Electric and gas utilities in the U.S. are requesting rate increases in growing magnitude as the industry moves toward a clean energy economy, adopts new technology and replaces aging infrastructure. As evidenced by rate case filings made so far in 2022, another factor has been listed by utilities as a driver in their rate requests — unprecedented inflation.

In 2021, the dollar amount of rate increases requested by electric and gas utilities in general rate cases and some limited issue rider proceedings surpassed amounts requested in any previous year tracked by Regulatory Research Associates. Our data indicates that 2022 is poised to approach that dollar-value total, as the amount requested by utilities through Aug. 30 is more than any year other than 2021.

* After a relatively quiet 2020, when utilities postponed or withdrew rate cases to alleviate the economic impact on businesses and residential customers, utilities were back with an ambitious rate request agenda in 2021, seeking the highest combined increase in electric and gas rates since RRA began tracking cases. Rate requests so far in 2022 are approaching that record total, with a new factor rearing its head — unprecedented inflation.

* Electric and gas utilities have been documenting inflation's impact on their cost of operations, and some have proposed rate mechanisms to offset the impact and reduce regulatory lag.

* There are regulatory constructs in certain states that may protect investor-owned utilities from rising costs, but not every utility can avail themselves of such relief.

Inflation — as measured by the U.S. consumer price index — has climbed since early 2021. In June 2022, the index jumped 9.1% from June 2021 — the biggest year-over-year increase since November 1981. The consumer price index jumped 8.5% year over year in July this year, the Bureau of Labor Statistics reported Aug. 10. The August reading of the index is scheduled to be released Sept. 13. 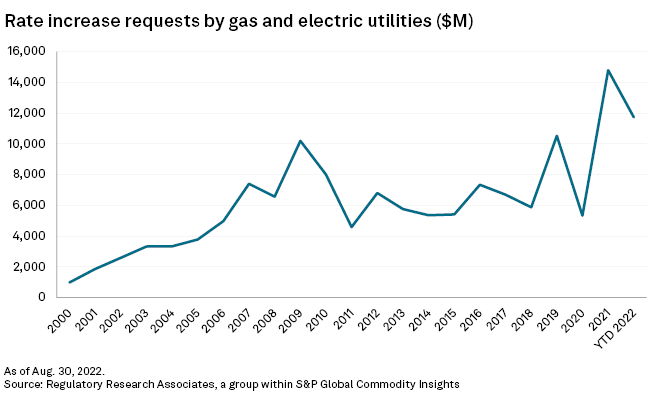 "Regulatory lag will be an even greater concern in this rate case, as two of the biggest financial challenges associated with regulatory lag — overall inflation and a tight labor market — are almost certain to increase while this case is pending and continue to increase during the rate effective period," a witness for Washington Gas Light Co. testified in April in the company's request for a gas rate increase, Formal Case No. 1169 in the District of Columbia.

The company indicated that it does not face similar challenges in Maryland and Virginia, where it also does business, because of a shorter statutory deadline to complete rate cases or provision of interim rates. However, because the District of Columbia has taken longer to adjudicate cases, by the time new rates are implemented, "the revenues they generated no longer matched the cost structure incurred by Washington Gas."

In its May gas rate case, Docket 20220067-GU, filing Florida Public Utilities Co. noted "historically high inflation in areas such as increased insurance premiums, cost of materials and labor" as key drivers in the proceeding.

In its Pennsylvania gas rate case, filing PECO Energy Co. noted that inflation and other macroeconomic factors were not only impacting its own costs and expenses but also hurting its top line in terms of residential customer revenue. "At the same time, materials and contracting costs have escalated as a result of general inflationary trends and rising labor and material costs in the utility industry. These cost increases have been particularly acute in the past year. Usage per residential customer is also expected to decline further due to an increase in gas commodity prices and more customers returning to the workplace after an extended period of time working remotely," the company testified.

In its recently filed electric rate case in South Carolina, a cost-of-capital witness for Duke Energy Progress LLC testified that a "Perfect Storm" was "impacting investor risk perception of electric utilities — declining sales per customer and rising costs, all at a time when large capital investment is needed to address aging infrastructure and other issues." 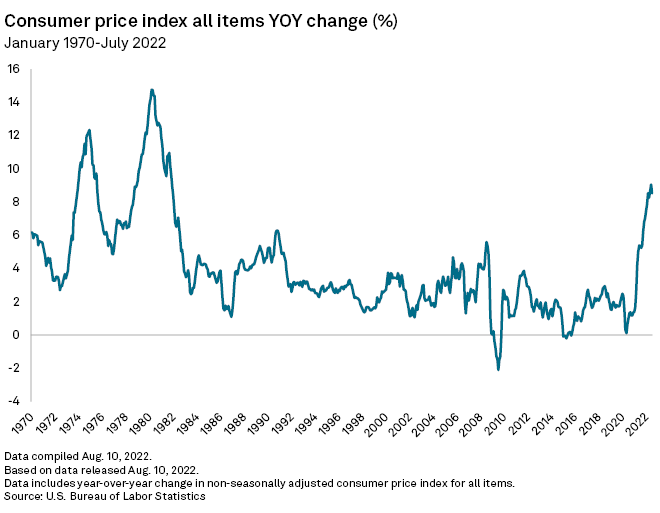 In cases where utilities have calculated the cost of inflation as a percentage of the overall revenue requirement increase request, the rough consensus has been the high single digits.

PacifiCorp, which filed for an electric base rate increase in Oregon in March, Docket UE-399, indicated that inflation accounted for approximately $8.4 million of its requested total non-net power costs revenue requirement. The utility is seeking an $86.4 million overall increase in electric rates in Oregon.

Boston Gas Co. is seeking a $64 million distribution base rate increase effective Oct. 1 as part of its first annual rate adjustment under the performance-based ratemaking, or PBR, framework adopted in Massachusetts. The proposed PBR plan includes a revenue cap formula to adjust distribution rates annually and incorporates an inflation index that uses the gross domestic product price index, or GDP-PI, and is adjusted by a productivity offset, consumer dividend, Z factor and earnings sharing mechanism. "Specifically, the company states that due to several factors including the 'ongoing war in Ukraine, labor shortages coupled with wage increases, and supply chain issues across multiple industries,' the country is experiencing 'unusually high inflation.' This high inflation is reflected in the GDP-PI, which is a component of the PBR [Adjustment]," Boston Gas indicated.

As part of its rate case filing in May, Delmarva Power & Light Co. has requested the Maryland Public Service Commission approve inflation-related ratemaking adjustments to account for the "current high inflation environment." The PSC has approved such mechanisms in a number of previous cases. "Not addressing the higher-than-normal inflation in this direct filing merely kicks the issue down the road," the company noted in testimony. The ratemaking adjustment proposes to adjust the cost of service and rate base for the higher-than-normal inflation in 2022 on non-labor operations and maintenance, or O&M, and capital expenses, which impacts the utility's bridge year — 2022 — and the subsequent multiyear rate plan, or MYP, years of 2023 through 2025.

In connection with its rate case before the New York Public Service Commission, Consolidated Edison Co. of New York Inc. has proposed an inflation reconciliation mechanism. The company proposes that if the general inflation rate exceeds 5% in any of the rate years and its electric or gas earnings are less than the authorized return on equity, the company would be allowed to request authorization from the commission to defer the lower of the actual inflationary increases above the 5% applicable to the expenses subject to escalation or the actual costs incurred above the 5%. The company has also proposed an additional reconciliation mechanism for wage inflation along with its original non-labor O&M inflation proposal.

"Under normal conditions, the company is able to manage wage fluctuations within its larger O&M portfolio. However, in the current volatile inflation environment, the company is seeking protection from a hyperinflation situation where paying competitive wages could put enough pressure on the company's O&M to unduly impact its projects and programs," Consolidated Edison testified.

New York State Electric & Gas Corp., or NYSEG, and Rochester Gas and Electric Co., or RG&E, are also seeking to implement reconciliations for inflation. NYSEG and RG&E said inflation is causing atypical upward cost pressures. The utilities said they "are experiencing macroeconomic pressures including higher rates of inflation, higher interest rates, and restrictions in supply that have substantially increased costs beyond the companies' control for essential business items like labor, benefits, materials and contractor costs." The PSC has approved an inflation reconciliation adjustment previously for the companies as part of a multiyear rate case settlement adopted in 2010. Iberdrola SA is the majority owner of Avangrid Inc. and the ultimate parent of NYSEG and RG&E.

In some cases, utilities are arguing for a higher authorized return on equity due to volatility in financial markets and rising inflation and interest rates.

Supporting an increase in gas base rates, Spire Missouri Inc. testified that current market conditions dictate a higher cost of equity than in a previous rate case proceeding by the utility. "The financial backdrop as of March 2022 points to more challenging market conditions ahead. Inflation does not appear to be transitory. U.S. inflation climbed to a 7.9% rate in February — a level that has not been seen in four decades. ... This increase has been driven by supply chain disruptions and excess money printing (COVID stimulus), as well as recent global economic disruptions in commodity markets caused by the Ukrainian conflict. This has created additional volatility in all financial markets," Spire said.

The commission's authorization of a 9.37% ROE has "resulted in Spire achieving the lowest overall [approved] rate of return [6.37%] of any Missouri utility." The company said such an outcome "is patently unfair in light of Spire's operational performance and ignores the current inflationary environment of the national economy. This decision on capital structure does not create adequate incentives to support infrastructure investments in Missouri — investments which benefit customers and support hundreds of good-paying jobs."

In its gas base rate increase request filed in April, South Jersey Gas Co. multiplied its O&M expense by an inflation factor of 3.3% to develop the known and measurable inflation allowance. The total inflation adjustment amounted to about $4.7 million. "Renewed economic growth has produced higher inflation to levels not seen in four decades. Indeed, in February 2022, the rate of inflation spiked upward to 7.9%, the highest in forty years, due to pandemic-related supply side issues, strong consumer demand, and tight labor markets. Supply shortages have also significantly impacted the consumer sector of the economy. Energy prices have increased as well, with the commodity cost of natural gas moving up," the company noted.

Most recently, Pacific Gas and Electric Co., on Sept. 6, filed testimony in its multiyear general rate case in California, requesting a cumulative $3.67 billion increase in electric and gas rates between 2023 and 2026. That is on top of the company's amended rate case petition, which is the largest increase in requested revenues ever recorded in rate cases tracked by RRA in cases dating back more than 40 years. The dockets are A-21-06-021 (Elec) and A-21-06-021 (Gas).

The company indicated it had "observed that prices for equipment, materials, supplies, employee labor, contractor services, and variable-rate debt have increased. Long-term inflationary pressures may result in such prices continuing to increase more quickly than expected. Increases in inflation raises costs for labor, materials and services, and PG&E Corporation and the Utility may be unable to secure these resources on economically acceptable terms or offset such costs with increased revenues, operating efficiencies, or cost savings, which may adversely impact PG&E Corporation's and the Utility's financial condition, results of operation, liquidity, and cash flows."

For more on inflation and its impact in pending rate cases, refer to Electric, gas rate case activity remains robust amid dimming US economic outlook. 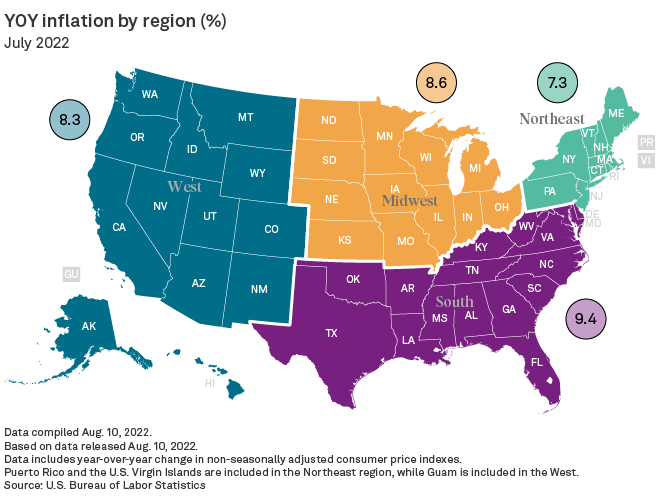 Even after stripping out the impacts of inflation, which was rampant throughout the late 1970s and early 1980s, 2021 was the year when more was requested in rate increases by energy utilities than any other year tracked by RRA. Inflation remained relatively stable over much of the past decade but ticked higher in 2021 before beginning to surge in 2022.

The rate relief requested by utilities in 2021 was an almost threefold increase from that requested in 2020 during the beginning of the COVID-19 pandemic when many utilities withdrew or postponed rate cases to reduce the economic impact on struggling businesses and residents. As utility disconnection moratoriums have mostly expired, utilities have begun to seek recovery of bad-debt expenses and other costs incurred during the pandemic in rate cases. For more on COVID-19 cost recovery, refer to Utility shut-off bans, while ending, continue to challenge utility financials.