Though California is thought to be the leader in renewable energy in the U.S., run by an aggressive clean energy standard, Texas has more installed capacity, with no effective renewable portfolio or clean energy standard, and is quickly catching up to California in its renewable market share. With plentiful land area and strong resources across the state, Texas is the leader in wind power capacity and has the largest development pipeline of solar and wind projects.

Hourly pricing differs in California ISO and Electric Reliability Council Of Texas Inc. due to their market structures and current renewable capacities. ERCOT uses the operating reserve demand curve as a resource adequacy construct to ensure reliability by increasing prices during periods of high demand and low generator availability. With high wind penetration in ERCOT, the scarcity pricing along with peak demand in the afternoon, when wind generation is near its low point. This combination of factors incentivizes resources that can benefit from high afternoon scarcity prices, including gas, solar and battery storage.

Though these dynamics are most apparent during August, when prices are highest, the annual signature is similar. Annual average hourly price peaks in Texas are more aligned with solar generation than wind, and vice versa in California.With high solar penetration in CAISO, the duck curve of net demand causes peak pricing after the sun goes down as wind is near its peak generation. This in turn incentivizes resources that are available in the evening hours, including wind and battery storage.

S&P Global Market Intelligence Power Forecast models 2,090 MW of wind and 12,450 MW of solar (with 3,940 MW of batteries) built in CAISO by 2025, in addition to the 3.8 GW of behind-the-meter solar in CAISO's queue. Even with the expansion of storage, the duck curve is still growing, reducing the prices when solar is most abundant and increasing prices when wind and batteries are generally available.

In Texas, Power Forecast builds 1,540 MW of wind, 3,390 MW of solar and 8,380 MW of gas-fired generation, both combined cycle and peaking, mostly from the development pipeline through 2025. This build-out has minimal impact on average hourly prices to 2025, keeping the economic value more aligned with solar rather than wind. However, by 2025, the scarcity pricing has decreased due to the new solar and gas capacity increasing the forecast operating reserves in the afternoon hours.

Despite far more wind being online in ERCOT and solar in CAISO and the total hourly revenue that follows, the forecast monthly revenue per megawatt-hour favors the resources with less penetration. In each state, the economics of hourly pricing result in a different balance of wind and solar prices. Wind is consistently more economic than solar in CAISO, while solar is consistently more economic than wind in Texas. 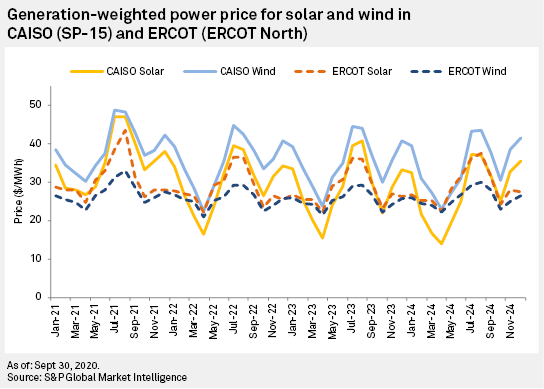 The marginal fuel in CAISO varies throughout the day and will increasingly do so as more renewables enter the system, resulting in larger ranges of prices. The springtime drops in solar pricing due to low shoulder-season demand and the expansion of solar resources result in decreasing annual average economic value with time. In ERCOT, however, gas is on the margin most hours of the day throughout the year, propping up the prices for solar and wind's benefit.The inter-annual cycles of wind and solar economics also vary between states. Summer and winter both provide peak revenue opportunities in California, while only summertime prices peak in Texas. While the solar generation-weighted power price is similar in summertime between the states, CAISO's wintertime peak brings up the annual average above ERCOT.

The unique markets of CAISO and ERCOT respond to these economic forces in different ways, with policy — or lack thereof — being an important driver of development choices in each state. With no renewable portfolio standard or other state mandate in place in Texas, all resource types are open for development, including conventional resources. Being free from policy, the responses to scarcity economics are immediate, with the resources that are available during peak pricing hours making up the vast majority of the development queue. Over 15 GW of solar are in development in Texas through 2024, in addition to 1,120 MW of gas-fired peaking generation. Development of wind appears to be losing steam, with 6 GW slated for 2021 but only 1 GW in 2022. 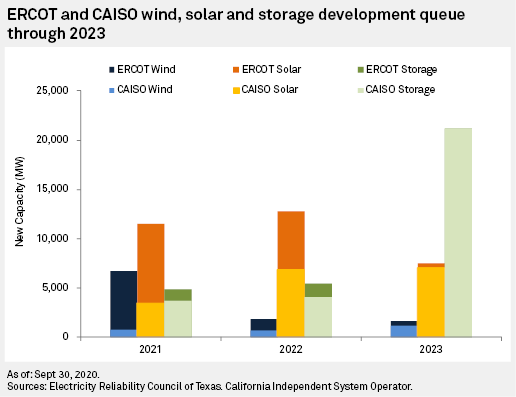 Regulatory Research Associates is a group within S&P Global Market Intelligence.Conversely, California has a clean energy standard to meet, a resource adequacy shortage and a California Public Utilities Commission that does not want gas-fired generation used for the immediate future's resource adequacy. The result is a development pipeline with very little wind but significant solar-plus-storage hybrid resources. Pairing battery storage with solar brings the costs down thanks to the investment tax credit and economies of scale by co-locating resources. The complications of the California market prevent the same immediate response to the economic signals that point to wind being the most economic resource.