Litigation financiers are helping small health insurers sue the federal government over risk corridor payments the insurers were promised but never received. If they are successful, the funds would win the lion's share of court awards.

Jul. 23 2018 — Ken Lalime was out of options. Regulators were threatening the fledgling non-profit health insurer he led with liquidation, and patients' claims were going unpaid.

A critical subsidy promised to insurers like Lalime's had been axed in Congress in late 2014, and the insurer had struggled to stay solvent. In 2016, Lalime decided to close the doors of his company, HealthyCT Inc.

As one of the state-level insurers founded after the Affordable Care Act was passed, HealthyCT had served as many as 41,000 patients over three years. It was also one of dozens of insurers relying on the federal subsidies called risk corridor payments the government had agreed to make to help cover high-cost patients.

But those payments had been cut in Congress, and the checks to insurers eventually stopped altogether. Lalime explained in an interview that his company went to the capital markets to raise money, tried to partner with other insurers and appealed directly to the federal health insurance regulator for relief. But the insurer's revenue could not keep up with claims without the risk corridor payments.

"We tried everything that we felt we could to shore up our capital position and that, unfortunately didn’t happen," Lalime said in an interview. "We had to take other arrangements."

HealthyCT, and some small insurers like it, eventually turned to a cottage industry of hedge funds to finance lawsuits against the government over those promised payments. For the cash HealthyCT needed to repay its creditors, it traded its right to receive its risk corridor funds for only a fraction of what it could have recovered in court.

Across the industry, some 60 insurers believe they are owed about $12.2 billion in total through the risk corridor program. For a handful of insurers willing to take the government to court for their share, litigation financing has quietly become a key part of that fight.

The ACA's risk corridor program was meant to act as a backstop to insurers in case they booked heavy losses on insurance products meant for high-risk patients. But the removal of the program’s funding undermined the business models of dozens of insurers who opted to offer the products.

That left many insurers scrambling to replace a source of funding they believed was guaranteed by law. At least 10 closed their doors within about a year of the payments' absence.

For HealthyCT, the only way to recover the money critical for operations was to sue. But a lengthy legal fight against the government was beyond the tiny insurer's means. HealthyCT spun its wheels for months before another option emerged in 2016.

In exchange for the nearly $45 million the insurer was owed, HealthyCT would receive $10.5 million from a hedge fund that would fight the government in court on its behalf. The firm, Chicago-based Juris Capital, stood to rake in a net gain of $34.5 million if courts ruled in the insurer's favor.

Juris Capital agreed to purchase the rights to any money recovered in court to cover HealthyCT's debt of about $10 million. The deal provided critical, immediate liquidity to the insurer and the prospect of a massive gain if the court sided with HealthyCT.

David Desser, managing director at Juris Capital, described the investment as high risk, high reward in an interview. Juris could book a windfall if it won, but the court could also decide the insurer is owed only a percentage of the loss it logged in its books, which could leave Juris with a disappointing return if not a loss. 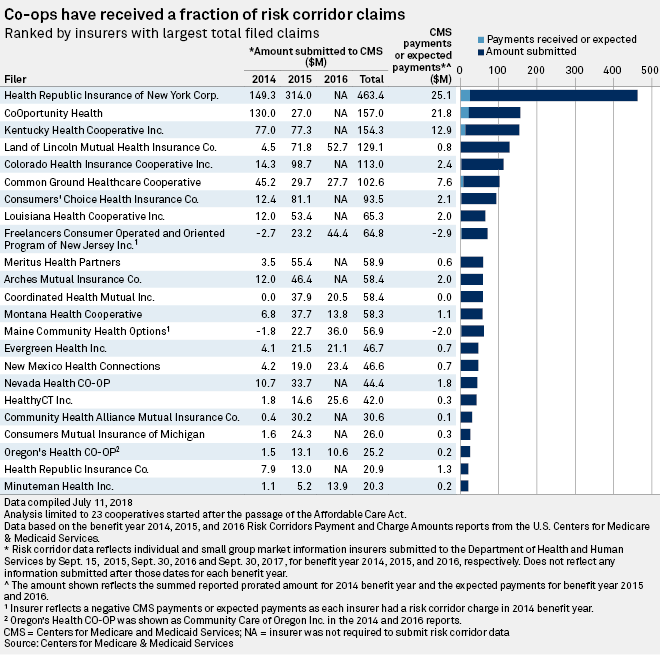 According to documents reviewed by S&P Global Market Intelligence and conversations with more than a dozen people familiar with the industry, other firms are seeking to strike deals resembling Juris' agreement with HealthyCT.

A victory for Juris and companies like it could put more risk corridor recoveries within reach for the insurers and litigation financiers alike.

One such New York-based company, Alluvium Partners, sent a letter to insurers in November 2017 seeking a similar arrangement. Attempts to reach Alluvium Partners' staff and associates were unsuccessful.

"Alluvium and its partners seek to provide liquidity and an immediate cash payment option to insurers with valid claims," the firm said in the letter, which was obtained by S&P Global Market Intelligence. "We are willing to entertain different purchase structures depending on the needs of the claimant."

For another company, Haybeach Partners LLC, the process is a gamble, but one with fair rules, co-founder Darius Goldman said in an interview.

Haybeach examined each insurer with a risk corridor claim and decided whether the company was worth pursuing as a client. The firm considered how much money an insurer owed to creditors against how much it was expecting to receive in risk corridor payments.

"Investors are willing to play blackjack — they don't like to play roulette," Goldman said. "There's a level of skill involved in blackjack."

In another case, a Kentucky co-op that failed in 2015 may decide to trade a far larger court award for a smaller lifeline.

On June 25, Kentucky Insurance Commissioner Nancy Atkins advocated for a plan to exchange as much as $142 million of risk corridor receivables owed to Kentucky Health Cooperative, Inc. for an $8 million capital infusion from a litigation financing firm, according to court documents obtained by S&P Global Market Intelligence.

The complex financing arrangement would be made with a company called CM Squared RC Partners LC. While it is named in the documents, CM Squared does not have a website and could not be reached for comment.

Depending on the court's decision and the size of any recovery, one of several results could play out for the co-op and for CM Squared.

Atkins wrote in a court document that if the litigation is unsuccessful and results in no recovery, the remaining controlling interests in the co-op's liquidation estate retains the $8 million, while "CM Squared gets nothing."

If the litigation results in some recovery, the hedge fund will be entitled to be paid a portion of the recovery under a waterfall agreement in the contract.

Daniel Watkins, deputy liquidator for the Connecticut Department of Insurance in HealthyCT’s case, called the arrangement a viable option for insurers to offload the risk of never recovering any funds.

"All parties are well-informed," Watkins said in an interview. "It is simply the sale of a troubled asset." 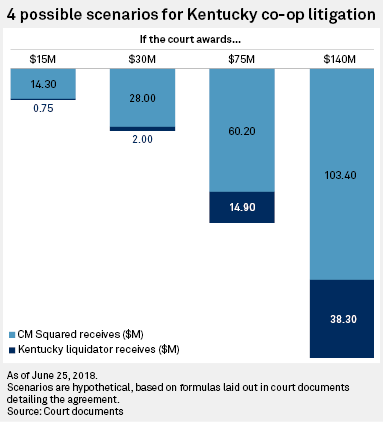 But for Kentucky’s co-op, the arrangement is more complicated, James Irving, a partner for Louisville, Kent.-based Bingham Greenebaum Doll LLP, said in an interview.

Irving, who represents a creditor in the liquidation of Kentucky Health Cooperative, said the $8 million from CM Squared is not enough money to cover the insurer's debt. Irving said he may argue that waiting for a final decision, in which the co-op could keep all the money it believes it is owed in court, is better for the state.

"The sell agreement is at a very large discount," Irving said. The question, he said, is if Atkins is getting a "fair price for a potentially very valuable asset."

Litigation finance agreements have long been one of many alternative investment vehicles for hedge funds and private investors. But their involvement in the risk corridor suits is a comparatively recent development that could spread if a key court decision clarifies the legality of insurers' claims to the payments.

In one major strike against insurers, a $75 million suit brought by Illinois-based Land of Lincoln Mutual Health Insurance Co. was dismissed in federal court in November 2016.

The government appealed and recently won against Moda in a 2-1 decision, setting a precedent that it does not owe insurers risk corridor payments.

The parties' next step is to ask the entire appeals court, not just a three-judge panel, to reconsider the decision.

Haybeach's Goldman said before the 2-1 court ruling, interest in these transactions was gaining steam. But after the panel decided against Moda, firms have been backing away as the odds of winning faded, he said.

The full appellate court is slated to decide in the last week of July if it will consider the case.

If the full court accepts the case, the decision may favor insurers because most of the court judges are Obama-era appointees who could back the original provisions of the ACA. If the case follows that path, Goldman said investors now sitting on the sidelines would want back in the game.

Juris Capital's Desser believes another path is likely: that the Supreme Court will take up the Moda case, given the billions in payments originally promised to insurers across the industry and the high-profile label of the ACA.

"There’s a lot of money in it for [the] funds," Irving, the attorney involved in the Kentucky case, said. "You only need to win once or twice for investors make a fortune. But it’s risky. It’s very risky."