The U.S. has been the most prominent advocate of using mmWave spectrum for 5G. China, on the other hand, is yet to make mmWave available to operators.

Local and global 5G leaders agreed in the mmWave Forum of GSMA Thrive that the ecosystem for mmWave 5G in China lags behind the U.S. and other 5G pioneer markets, but developing this spectrum will have a significant impact on the market's massive mobile and internet of things markets.

The virtual event, held June 30 to July 2, was a streamlined alternative to MWC Shanghai that was originally scheduled on the same dates.

In previous years, MWC Shanghai focused on harmonizing 5G spectrum worldwide across three ranges: low-band (below 1 GHz), mid-band (1 GHz to 6 GHz) and high-band or mmWave (above 24 GHz). The combination of these three frequency ranges, according to industry experts, is necessary for the adequate delivery of varied 5G use cases.

5G deployments have accelerated in 2020, according to GSMA Intelligence Senior Manager for Mobile Operators and Networks Matthew Iji. According to Iji, 79 operators across 38 markets worldwide have launched commercial 5G services, most of which use mid-band spectrum.

This confirms our earlier findings in February 2020 where we saw that 56 out of 62 commercial 5G networks worldwide use mid-band spectrum, with 3.5 GHz as the most popular band. We also saw that 84 out of 150 local operators within our coverage have used 3.5 GHz in their 5G trials.

Mid-band spectrum, together with low-band, developed the most established 5G ecosystem because it is relatively adjacent to bands used for legacy mobile services. Wanbo Xie, head of antenna pre-research team at Xiaomi, mentioned mmWave is "radically different" from spectrum used for 2G, 3G and 4G, making it more difficult to incorporate mmWave 5G operability in consumer devices like smartphones, compared to mid-band or low-band.

Xie explained that mmWave's poor propagation and weak obstacle penetration ability brings challenges to equipment and device manufacturers, which ultimately curtails the development of its ecosystem. Other speakers shared the same sentiment, saying these mmWave characteristics require the rollout of more towers and cells, which ultimately brings up the cost of deployment for operators.

Despite these hurdles, interest in mmWave has been increasing among operators worldwide. Qualcomm Inc. President Cristiano Amon noted that out of the 320 operators investing in 5G as of June 2020, 120 are investing in mmWave for its promises of high data speeds. 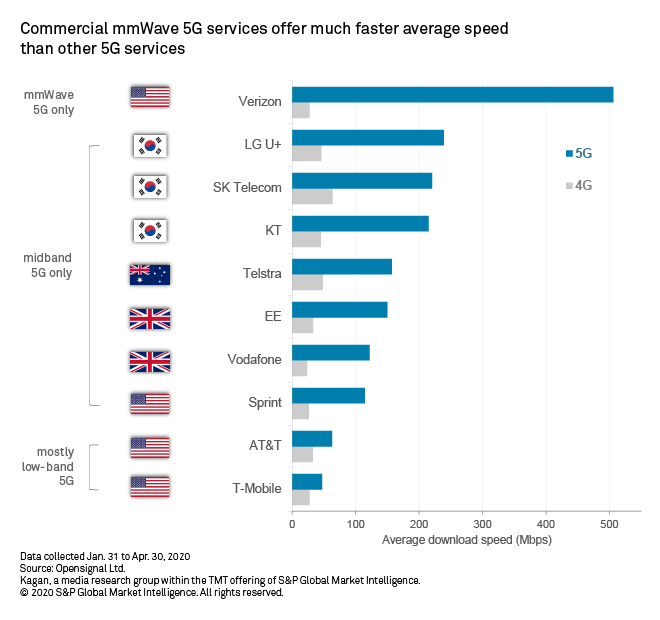 Speakers in the forum said the U.S. currently has the most developed mmWave 5G ecosystem. The U.S. has been the most prominent advocate of using mmWave spectrum for 5G, making it available as early as possible. Only a handful of other markets have released mmWave spectrum for 5G as of June 2020 such as Finland, Hong Kong, Italy, Japan, Norway, South Korea, Taiwan and Thailand but more may follow, according to speakers, since the International Telecommunication Union already officially opened mmWave spectrum for mobile services in WRC-19 last November 2019.

China, on the other hand, is yet to make mmWave available to operators. Our latest research shows that current 5G bands in China are mostly mid-band (2.6 GHz, 3.3 GHz, 3.5 GHz and 4.9 GHz) and low-band (700 MHz). China's Ministry of Industry and Information Technology, or MIIT, is reportedly exploring mmWave for 5G in the 26 GHz band (24.75-27.5 GHz) as of May 2020, with no set timeline yet for allocation to operators.

Yongsheng Chi, vice president of China Unicom Network Technology Research Institute, noted China is lagging behind the U.S., Japan, Europe and the Middle East in mmWave development. Chi said, "The industrial supply chain and localization of mmWave in China is still poor compared to other markets." 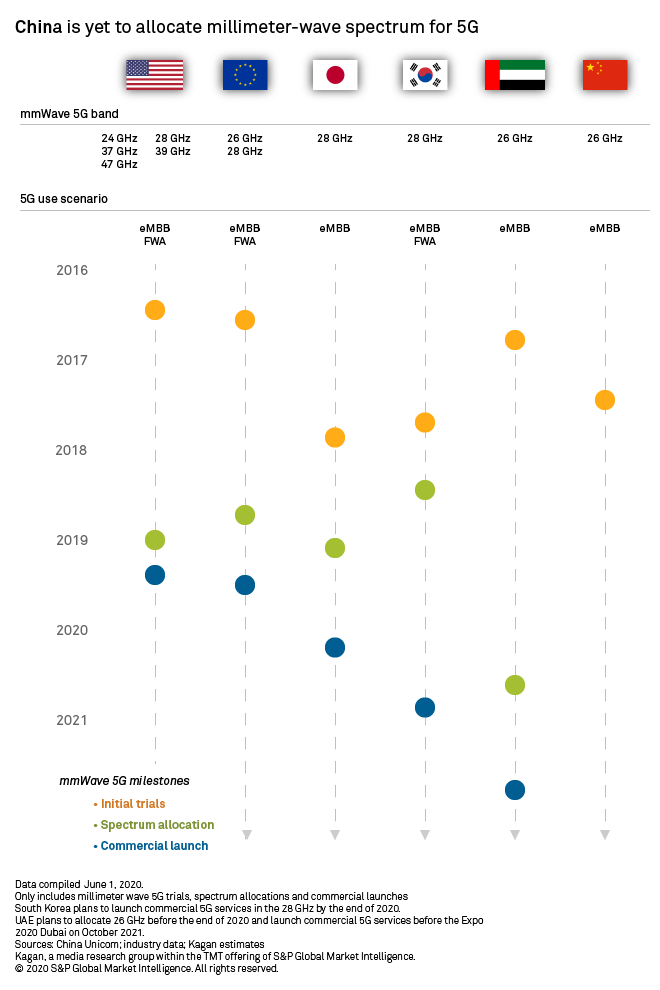 China Telecom Research Institute Chief Technical Officer Qi Bi took a more optimistic stance, saying that "mmWave will have a bright future in China." Initial mmWave deployment in China, according to Bi, will likely follow the fixed wireless route that Verizon took in the U.S. He sees it being deployed in densely-populated urban areas, something that China has no shortage of. Eventually, Bi sees mmWave's biggest impact in China on industrial automation. The fact that China has the world's largest mobile and IoT markets will amplify China's standing in the global mmWave scene, according to Bi.

Before this becomes a reality, Bi argued that MIIT should expedite the granting of mmWave spectrum licenses since it is a prerequisite for the whole ecosystem. Chi added that there has to be better coordination between operators, industry verticals and the Chinese government in order to efficiently deploy mmWave for various use cases.

Some panelists believed that the global mmWave ecosystem — and not just China's — is still unripe. "Compared to the mature ecosystem of sub-6 GHz, mmWave still has a long way to go to be more suitable for large-scale deployment," said Zhu Wen, principal technology lead at Keysight Technology.

To achieve a healthy, global mmWave ecosystem, Bi asserted that there should be a balance between competition and collaboration among markets worldwide instead of the current heated 5G competition between China and the U.S. "We are still in the early phase [of 5G deployment]. We have lots of things to learn together," said Bi.