Government initiatives, fiber build-outs and migration as well as faster broadband speeds at lower costs have been the main drivers of Southeast Asia's broadband growth, which reached an estimated 44.8 million broadband households in 2019. Kagan estimates the region generated $8.39 billion in broadband revenue and had an average blended average revenue per user of $16.69 in 2019. However, limited infrastructure in far-flung areas and low purchasing power has kept broadband penetration low, covering a mere 27.7% of 161.5 million households in Indonesia, Malaysia, the Philippines, Singapore, Thailand and Vietnam. 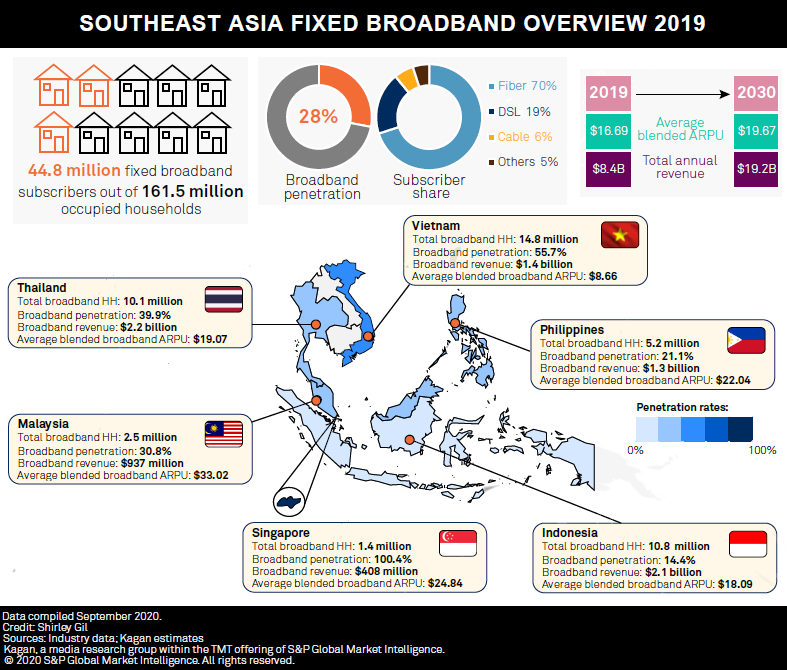 As of year-end 2019, fiber had the largest subscriber and revenue share among broadband platforms, driving positive momentum in both fixed broadband subscriber and revenue growth for the next 10 years. Kagan forecasts broadband households in the markets in our analysis to reach up to 82.4 million with a 42.1% penetration rate by 2030 and maintain a gradual but upward gain to $19.15 billion in revenue and a $19.67 ARPU.

With 93.1% of its subscribers connected through fiber, increasing fiber-to-the-home uptake pushed broadband households in Vietnam up to 14.8 million subscriptions in 2019, making it the largest broadband market in Southeast Asia in terms of subscriber numbers. The low subscription price against the number of households, however, took a toll on Vietnam's average blended broadband ARPU, ranking the lowest among Southeast Asian markets at $8.66 in 2019. The implementation of mandatory pricing in Malaysia generated the highest ARPU in Southeast Asia, reaching $33.02 at year-end 2019.

Thailand contributed the largest share in terms of revenue, generating an estimated $2.21 billion in 2019. Increasing demand for higher-tier fiber services urged ISPs to eliminate lower speeds packages and offer faster broadband services at a lower cost. Indonesia came in a close second with $2.14 billion in revenue in 2019, thanks to the strong preference for fiber broadband in the country. Despite generating the second-largest revenue, Indonesia still ranked the lowest in broadband penetration rate among Southeast Asian markets in 2019, as the country's archipelagic nature makes it difficult for service providers to build and expand fiber networks.

Broadband has remained affordable in Singapore relative to its citizens' purchasing power amid the costly rates. With its GNI PPP per capita of $96,444 against the estimated $24.84 average blended ARPU in 2019, broadband affordability clocked in at 0.3%, recording the lowest affordability rate in Southeast Asia. On the flipside, broadband has remained a luxury for most households in the Philippines, garnering the highest percentage in the broadband affordability index at 2.5% against its estimated GNI PPP per capita of $10,694 in 2019. 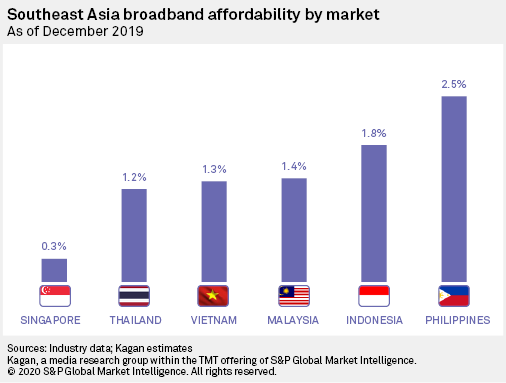