Sep. 19 2018 — At the height of the credit crunch in 2008, academics at the London School of Economics were infamously caught off guard when the Queen of England asked why no one saw the financial crisis coming. Now, 10 years after the collapse of Lehman Brothers Holdings Inc. on Sept. 15 2008, economists, regulators, policymakers and finance industry insiders are asking themselves where the next financial crisis could come from, and what danger signals they should watch for, to avoid being blindsided again.

While there are several areas of potential concern, industry experts broadly do not believe a systemic collapse on the same scale of 2008 is on the horizon.

"It'll be another bump in the road, but not as severe as 2008," Ned Kelly III, a former executive at Citigroup Inc., said in an interview. Kelly held positions including CFO and vice chairman during and after the 2008 financial crisis.

Still, a host of potential risks — swelling corporate debt, the expanding shadow banking sector, ballooning student debt in the U.S. and a hypothetical clearinghouse collapse — could prompt the next recession.

Global corporate debt levels today are higher than they were on the eve of the global crisis, posing a "significant credit risk," according to S&P Global Ratings. Helped by easy credit and a global low-interest rate environment, non-financial corporate debt increased 15% from 2011 to 2017, to 96% of global GDP, according to a February 2018 report from the agency.

S&P Global Ratings estimates that 37% of corporates could be categorized as highly leveraged, or with a debt-to-earnings ratio above 5x, as of February 2018, compared with 32% in 2007. China in particular has seen a bonanza in corporate borrowing, with debt increasing by 104% since the end of 2011.

"You could almost fall off your chair when you look at levels of non-financial corporate debt in China," Paul Watters, head of corporate research for Europe at S&P Global Ratings, said.

The two major questions now are what could cause companies to default, and whether it would be as easy for them to refinance their debt as it has been in recent years, Watters said.

"Refinancing is critical. It's an existential moment for a company with a lot of debt," he said.

In the U.S., corporate debt hit a record $6.3 trillion in June, according to S&P Global Ratings.

Joe Davis, global chief economist at Vanguard Group, believes that this is "not an alarming level." He warned that rising interest rates could put borrowers under pressure, but it is unlikely to cause a major crisis.

"I think that's more of a longer-term risk than an immediate risk to the global markets," Davis said.

Elsewhere in the financial system, the leveraged loan market has been on a run of explosive growth over the past 12 months, particularly in the U.S., where it hit a record $1.06 trillion in July, according to LCD, an offering of S&P Global Market Intelligence.

"Leverage is increasing quickly and will certainly be a problem as interest rates rise. At some point if the broader economy weakens [and] current trend lines continue, it could very well be at the heart of the next recession," Mark Zandi, chief economist at Moody's Analytics, said.

At the peak of the subprime mortgage market, roughly $3 trillion was outstanding. In the leveraged loan market, there is about $2.7 trillion now outstanding. 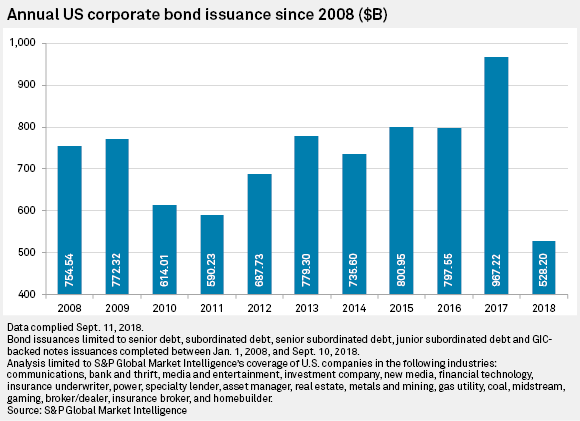 The global shadow banking sector has grown exponentially since the financial crisis, and has been cited by numerous central bankers and policymakers as the potential source of a future crisis. The sector grew by almost 7.6% to over $45 trillion in 2016, according to the most recent figures published by the Financial Stability Board.

While regulation of the banking sector has tightened in the years following the crash, the shadow banking sector, loosely defined as financial institutions that lend money without taking state-guaranteed deposits, has been left relatively untouched, according to Grace Blakeley, researcher at the institute for Public Policy Research, a think tank based in London.

The growth of shadow banking in China, where the market is worth an estimated $15 trillion, or 130% of GDP, is a particular cause for concern, she said in an interview.

"It's hard to know what regulators are doing in China. There is a view that regulation is inadequate," Blakelely said.

Mark Carney, governor of the Bank of England, expressed concern earlier in September that China's heavy levels of debt, particularly in the shadow banking market, made it one of the most significant risks to global financial stability.

Not only is the global shadow banking market growing, but the quality of collateral that it holds is deteriorating, according to Angela Gallo, research fellow at Cass Business School, part of City, University of London.

The global low interest rate environment has led to investors searching for assets that will bring them a higher yield, and this in turn has encouraged shadow banks to produce riskier classes of debt to cater to that demand, Gallo said.

"There is a huge demand for assets produced by the shadow banking system. It's really important to understand the demand side of the equation," she said. Shadow banks are increasingly creating debt products such as asset-backed commercial paper, or ABCP, collateralized loan obligations and mortgage-backed securities to respond to this demand.

Banks widely embraced CLOs and MBS in the years leading up to the global financial crisis as a way of moving debt off their balance sheets, thus allowing them to lend more, with disastrous effects.

A particular area of concern is the link between real estate booms in countries such as China and Australia and the shadow banking market. Given the amount of mortgage-related debt that is securitized by shadow "banks" today, a crash in real estate prices could have far-reaching consequences, according to Gallo.

Student loan debt in the U.S. recently surpassed $1.5 trillion, and defaults are on the rise. But the ripple effects of mass delinquencies will likely not be at the root of the next financial crisis.

"[The student loan debt size] is a small fraction of where we were in the U.S. housing market in 2006," Vanguard's Davis said. "Although it's risen significantly, it's not of sufficient scale to lead to a significant slowdown or crisis."

The rise of student loan debt has garnered broad criticism from lawmakers, regulators and economists, but not primarily because of concerns about systemic risk. The most pressing concern has tended to be that the rising costs for college education are preventing younger consumers from making large-scale purchases such as homes.

"Student loans are an area that people feel are slowing down the newest generation from being consumers," S&P Global Ratings analyst John Anglim said.

"[Student loan debt] could be at $2 trillion in another five years," he said. "But from a government standpoint, maybe it's not a big number. Maybe there [are] too many things going on in D.C. that are higher priorities right now, and this is just not making the cut." 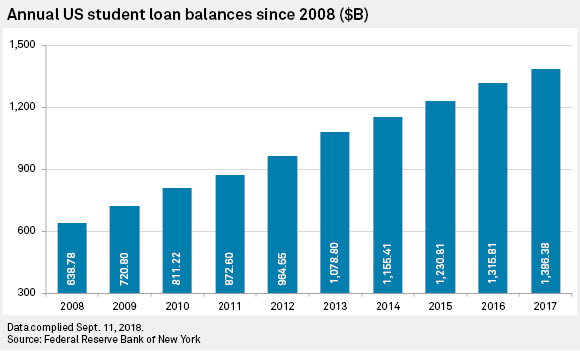 Clearinghouses play a vital role in global derivatives and equities markets, acting as an intermediary between parties on either side of a trade. But if one were to fail, the consequences for the global financial system could be devastating. It's a scenario that has already happened: the Hong Kong Futures Exchange went bust following the 1987 global stock market crash, effectively shutting down Hong Kong's main capital market for four days.

Clearing houses play a more pivotal role in the global financial infrastructure today than they did before the global financial crisis thanks to subsequent regulation. The Dodd-Frank Act in the United States discouraged so-called over-the-counter trading of stocks, derivatives and other instruments through informal dealer networks, and encouraged trading to shift to centralized clearing houses, which are believed to be less risky.

While this has been one of the most "widely applauded" features of Dodd-Frank, it has encouraged a high level of concentration, said David Skeel, professor of corporate law at the University of Pennsylvania.

"What has happened since Dodd-Frank is we've ended up with a small handful of clearinghouses that pretty much dominate the marketplace. The trajectory has been toward concentration, which to me makes short-term failure less likely, but it makes the potential consequences of failure much greater," he said.

Another issue with Dodd-Frank is that the legislation does not explicitly state that regulators should get involved in the event of a clearing house failure, and if they were to step in, what they should do, according to Skeel.

For Charles Ostroumoff, director of Arca Property Risk Management, a London-based firm that trades commercial real estate-related futures, concentration risk and the possibility of contagion are the biggest threats to clearing houses.

Another vulnerability in the system is that a small number of large exchange groups such as London Stock Exchange Group PLC and Intercontinental Exchange Inc. or ICE, own multiple clearing houses, Ostroumoff said, which intensifies concentration and contagion risks. ICE owns and operates seven central clearing houses in Europe, Asia and Singapore, while the LSE majority owns the world's largest clearing house, LCH Group.