Revenues from the subscription over-the-top market in Europe are expected to double over the next five years.

In 2018 Netflix and Amazon Prime Video were behind 72% of the total paid subscriptions and 71% of the total revenues generated by the 18 markets included in our analysis.

Feb. 25 2019 — Revenues from the subscription over-the-top market in Europe are expected to double over the next five years, reaching $12.7 billion in 2023, according to Kagan estimates. This growth is due to a number of different factors, including the expansion of international media players in the region as well as new service launches by local players, both by incumbents and smaller media groups. Formed alliances in the United Kingdom, Germany and France among broadcasters will further intensify the competition in the OTT landscape. 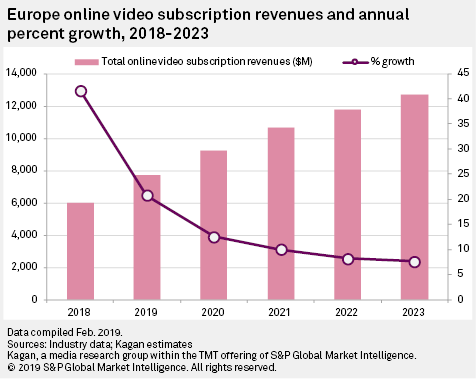 Netflix Inc. is the leading service in paid subscriptions in all markets but Germany, Poland and Russia after having spent $12 billion in cash on content globally in 2018. Currently, Amazon.com Inc.'s Prime Video is still ahead of Netflix in Germany, having capitalized on the initial success of Amazon Prime. In Eastern Europe, where the language barrier is more prevalent compared to that of Western European territories, the local and regional services attract the most subscribers with transactional video on demand and electronic sell-through options also available as part of their offerings.

Looking at the wider picture, in 2018 Netflix and Amazon Prime Video were behind 72% of the total paid subscriptions and 71% of the total revenues generated by the 18 markets included in our analysis. 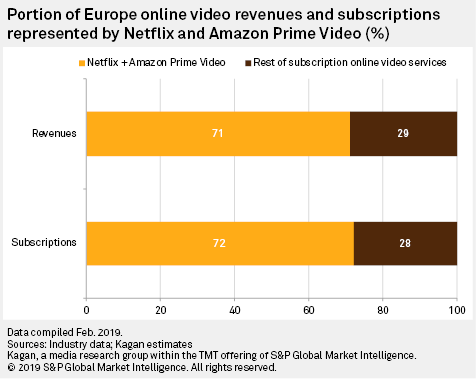 The ratio of the number of online video subscriptions to the population aged 16-64 is a good indicator of how popular streaming services are in a given market, taking into consideration the demographic most likely to purchase a subscription. Streaming services are especially popular in the Nordics with Denmark, Norway, Sweden and Finland showing penetration rates between 47% and 73% in 2018, followed by the U.K. with 41%. OTT is popular in the Nordic countries partly because of the high percentage of English speaking population, high speed and reliable broadband, a large selection of services — many of which offer livestreaming TV networks — and a number of partnerships between online and traditional players. 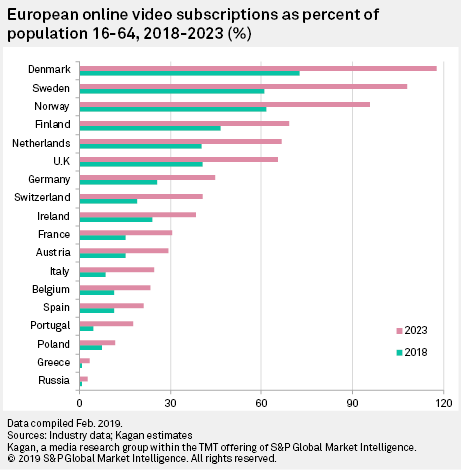 European SVOD Revenues To Reach $6.8 Billion By 2022 Driven By Growth In Two Markets