EMEA Deal-Making Muted in Q4 2020, With No Mega Deals in Sight

Apr. 22 2019 — This article is a continuation of our Gender Gap Research which focuses on women to men Chief Executive Officer (CEO) ratios in blue chip companies. The last piece was published in 2016 focusing on the S&P 500 and S&P Europe 350 (S&P Euro 350). This research series draws attention to the importance of employee diversification in major corporations across the U.S. and Europe. Find out more about S&P Global’s campaign to invest in woman via #changepays.

S&P Global recently published a report stating that acceleration in U.S. GDP growth under increased female labor force participation could add a whopping $5.87 trillion to global market capitalization in 10 years, report published June 2018. To see if this impact has been felt at the largest U.S. companies we conducted research on the gender gap trends of S&P 500 at the CEO level as of March 29, 2019. We then compared these trends to the S&P Euro 350 (which accounts for approximately 70% percent of the European equity market by capitalization)1 for the same time period.2 The current number of female CEOs running S&P Euro 350 companies is fifteen, compared to twenty four running S&P 500 companies.

The assessment conducted by S&P Global Market Intelligence from 2009 to 2019 revealed the following key findings3.

The S&P Euro 350 currently has fifteen companies with women CEOs, which is only 4.3% of the entire index. The growth has been steady with eight new women CEOs added since 2016. Since our previous report, two women led companies: PostNL N.V. and TDC A/S were dropped from the index, and four: Skandinaviska Enskilda Banken AB (publ), EasyJet plc, Tele2 AB (publ), and Swedbank AB (publ) replaced by men CEOs.

Further adding to the number of women CEOs, Hilde Merete Aasheim has been appointed as CEO of Norsk Hydro ASA, succeeding Svein Richard Brandtzæg, effective May 2019. Therefore, progress is being made gradually, and it is encouraging that we have not seen a decrease in women CEOs over the last eleven years. The complete list of S&P Euro 350 women CEOs is in the table below. 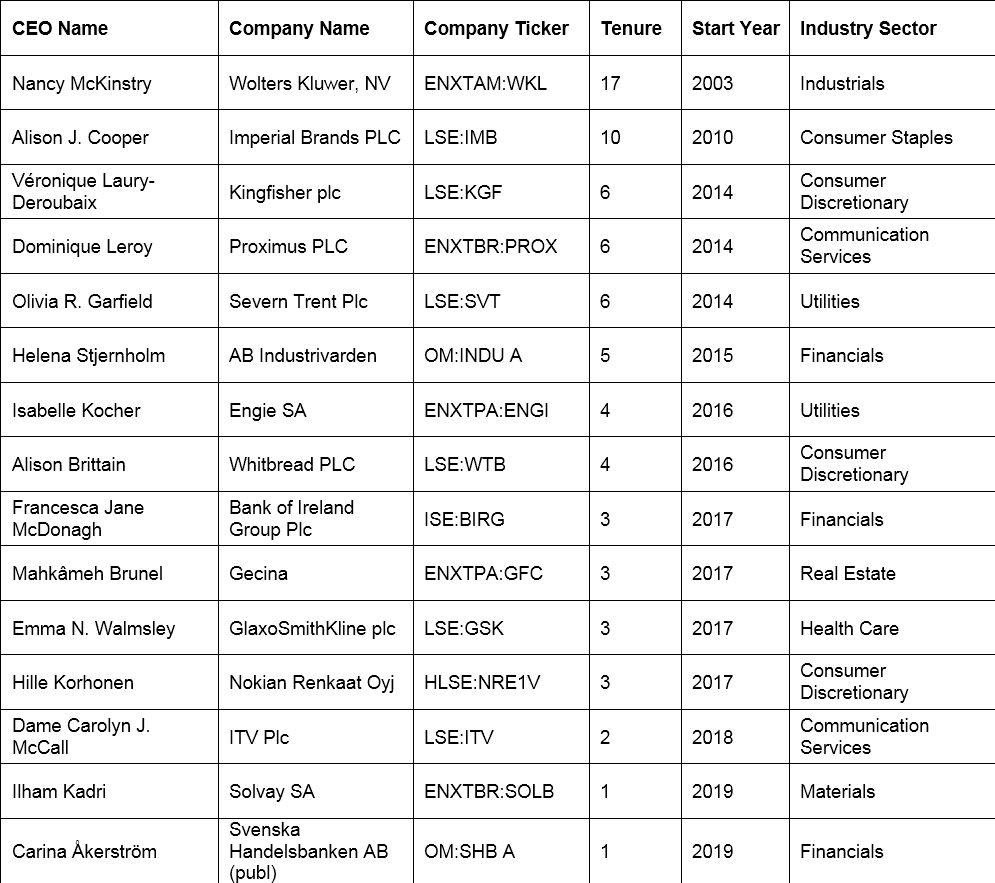 Source: S&P Global Market Intelligence data as of March 29, 2019.
Note: A CEO’s tenure starting in 2019 is counted as one year. Similarly, a CEO that started in 2018 and is currently active is counted as two years. 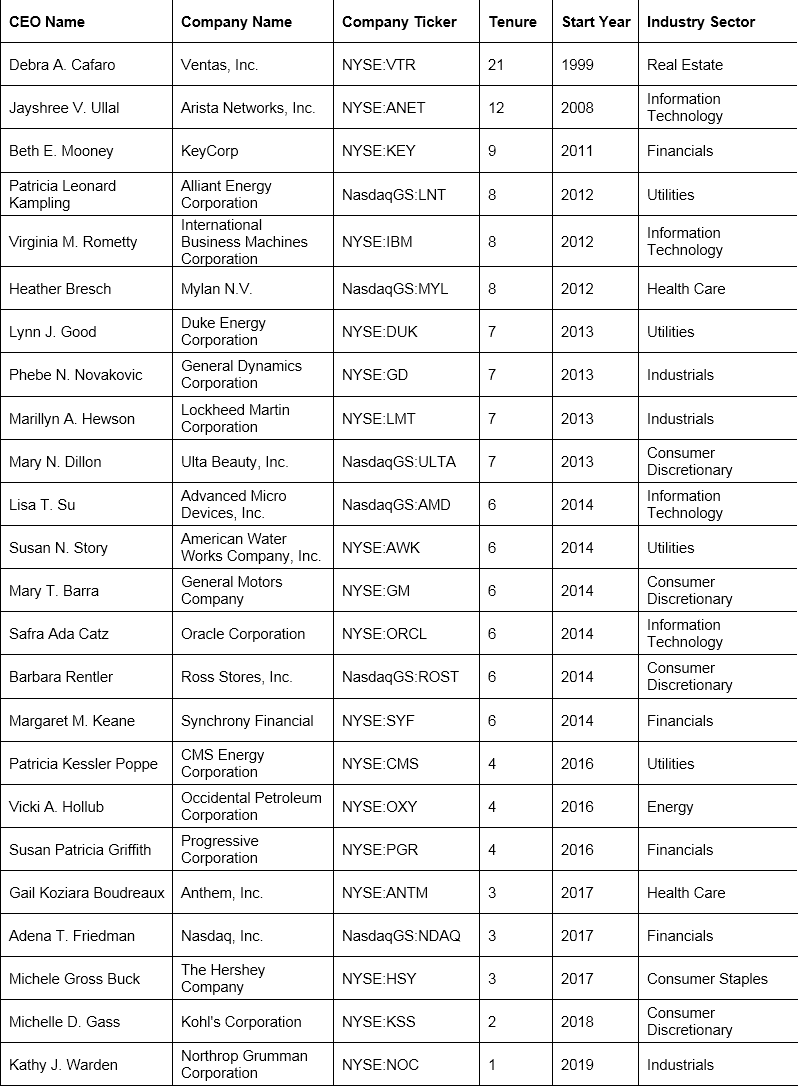 Source: S&P Global Market Intelligence data as of March 29, 2019.
Note: A CEO’s tenure starting in 2019 is counted as one year. Similarly, a CEO that started in 2018 and is currently active is counted as two years.

Incidentally, IT is markedly different between the two indices; there isn’t a female CEO in the S&P Euro 350 vs. four women CEOs in the S&P 500.

Utilities, Financials, IT, and Consumer Discretionary are the top sectors in the S&P 500 that have the most women CEOs. In our previous analysis conducted in 2016, only IT had the highest number of women CEOs. This illustrates a continued improvement in closing the gender gap across different – typically male-led – sectors.

Taking the current CEOs of the S&P Euro 350 and S&P 500 as of March 29, 2019 and tracking their years in office6 we were able to generate the median tenures of male and female CEOs. We found that the tenure of women CEOs lag their male counterparts by two years for the S&P Euro 350, similar to our previous report. 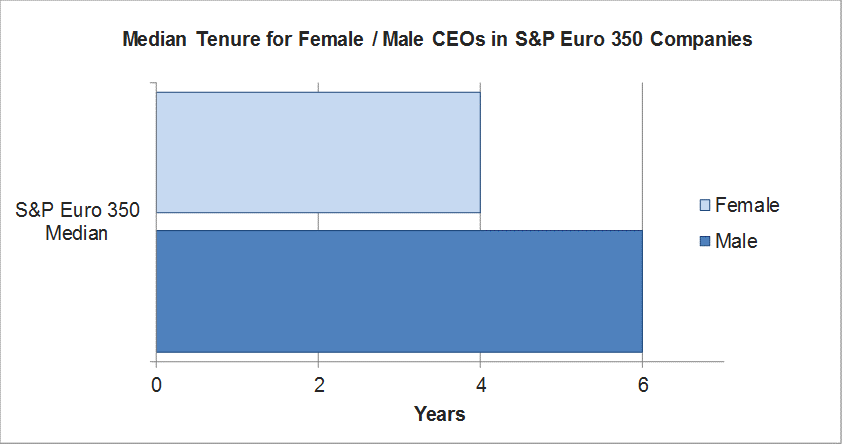 The median tenure of S&P 500 women and men CEOs is six years.7 Since our previous report, the gap in median tenure for men and women CEOs in S&P 500 has closed, showing positive developments in gender diversification in leadership positions. 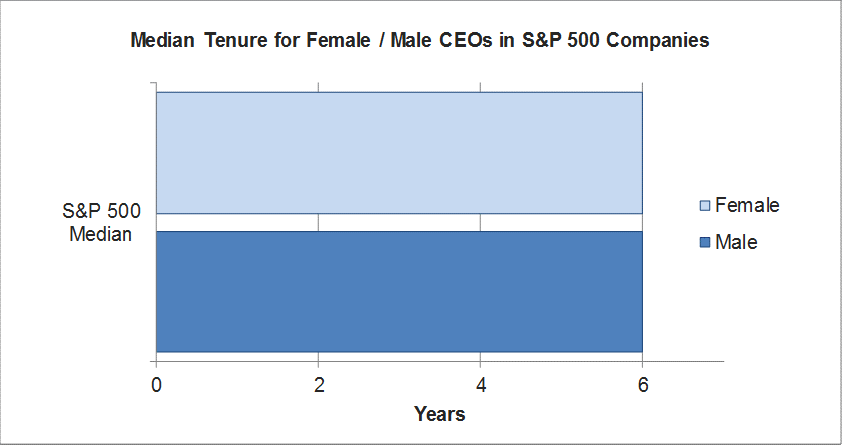 Progress: How the Gender Gap Has Changed for S&P Euro 350 &
S&P 500 Companies over the Last Eleven Years

The companies of S&P Euro 350 have increased women representation in leadership positions from six in 2009 to fifteen in 2019. Over the last eleven years, the growth rate is 0.8 new women CEOs every year. From having 1.7% women leadership in 2009, the proportion of women leaders has grown to 4.3% in 2019. Therefore, the proportion is slowly growing and at its highest, eleven years after.

The companies of S&P 500 have lower women representation since our previous report. Although lower, the past eleven years shows that the number of women CEOs increased from eighteen in 2009 to twenty four in 2019. Therefore, over eleven years the growth rate is 0.5 new women CEOs every year. From having 3.6% women representation in leadership positions in 2009, S&P 500 has grown to 4.8% in 2019.

Source: S&P Global Market Intelligence data as of March 29, 2019.
Note: If a female CEO appeared in any given year of an S&P Euro 350 Company - for example if they served as co-heads with a man - and even if they served as an interim CEO, we counted that as a female CEO for that company and year. If two men were co-CEOs, we used the CEO with the longest tenure.

The analysis was conducted using the S&P Euro 350 and S&P 500 constituents as of October 9 for 2009-2018, and March 29 for 2019. S&P Global Market Intelligence People Data and Key Development Data were used to populate the CEOs for each company as of this date going back eleven years from 2019. Where multiple CEOs existed for a company, for example a CEO change or interim CEO within the year, we would take the longest serving CEO. For years other than 2016, if multiple male and female CEOs existed for a company, for a given year, we would count that as a female CEO. Where there was no acting CEO, we used the highest ranking board member as a proxy (usually from the board of directors/supervisory board). In the study we did not look at any companies outside of the S&P Euro 350 or S&P 500. For the tenure data we looked at the CEOs of S&P Euro 350 and S&P 500 companies as of March 29, 2019 and counted how many continuous years they had served as the CEO of the company. If a break existed in the tenure, for example a CEO leaving for three years and then returning, we would take the most recent tenure as the number of years served. Finally the difference between the years of analysis for the gender gap (2009 to 2019) and tenure data of current CEOs is due to the gaps found in the index constituent data for companies in the S&P Euro 350 and S&P 500 prior to 2009.

(1) Source: http://us.spindices.com/indices/equity/sp-europe-350.
(2) This study only covers S&P Euro 350 and S&P 500 companies. We have not taken into account or analyzed Small to Medium Enterprises (SMEs) or privately own institutions whose leadership composition could vary significantly.
(3) To get access S&P Global Market Intelligence People Data and Key Development Data please follow the link for trial: https://www.spglobal.com/marketintelligence/en/client-segments/professional-services.
(4) Industry sectors are classified by the Global Industry Classification Standards code (GICS).
(5) We traced back the data of S&P Euro 350 & S&P 500 CEO’s to their start date to have full tenure data.
(6) We used median in our calculations and removed the bias of significantly long tenures skewing the results.