The spacecraft manufacturer reported 400,000 subscribers worldwide during a May 2022 presentation to the Federal Communications Commission. Starlink is present in 36 countries, but its footprint is expected to cover more parts of the Americas, Africa and Asia between late 2022 to 2023. Prior to the most recent subscriber disclosure, Starlink said during a March 22 conference that it had 250,000 users.

Despite disputes from both Viasat Inc. and Dish that could have slowed down Starlink's operations, the low earth orbit satellites are out of the bag and could disrupt broadband across the globe with competitive pricing and speeds. With the ability to launch its own satellites on frequent lower-cost flights, the constellation aims to: like other satellite services, provide high-speed internet in regions where it is unavailable around the world; and unlike other satellite operations, use the technology as a Martian communication system to support CEO Elon Musk's extraterrestrial vision of establishing the first base on the red planet.

Starlink was first announced in January 2015 as a global satellite internet project of SpaceX that, according to Musk, will provide people "gigabit-level access." With hundreds of satellites launched by mid-2020, the company initiated its "Better Than Nothing" public beta testing phase to select users in October of that year. The project became commercially available to a broad base of potential customers on Feb. 9, 2021, when its official website started accepting preorders.

Starlink satellites orbit the Earth 340 miles above the ground, about 98% closer to users compared to incumbent competitors EchoStar Corp. and Viasat, which have satellites located approximately 22,000 miles above the Earth. The lower height and larger volume of satellites are key to the service's faster speeds.

As of July 2022, Starlink has deployed over 2,800 satellites aboard the Falcon 9 rocket in low earth orbit. Falcon 9's reusability aims to reduce what traditionally would have been heavy expenses associated with space travel. Starlink launched 989 satellites in 2021, outpacing the 833 satellites delivered in 2020. Since the beginning of 2022, more than 900 satellites have been added to the Starlink megaconstellation.

In the U.S., Starlink is available across much of the lower 48. Its single residential package offers speeds ranging from 50-200 Mbps, multiples faster than both HughesNet and Viasat. Starlink guarantees no data caps in the U.S. as well. On March 21, 2022, Starlink implemented a price hike to $110 from $99 per month for residential customers. The spike was potentially due to price increases in the value chain. Elon Musk shared in a tweet March 14 that SpaceX was experiencing "inflation pressure in raw materials & logistics." This is still far below the $159.99 and $199.99 monthly rates of incumbent operators HughesNet and Viasat. 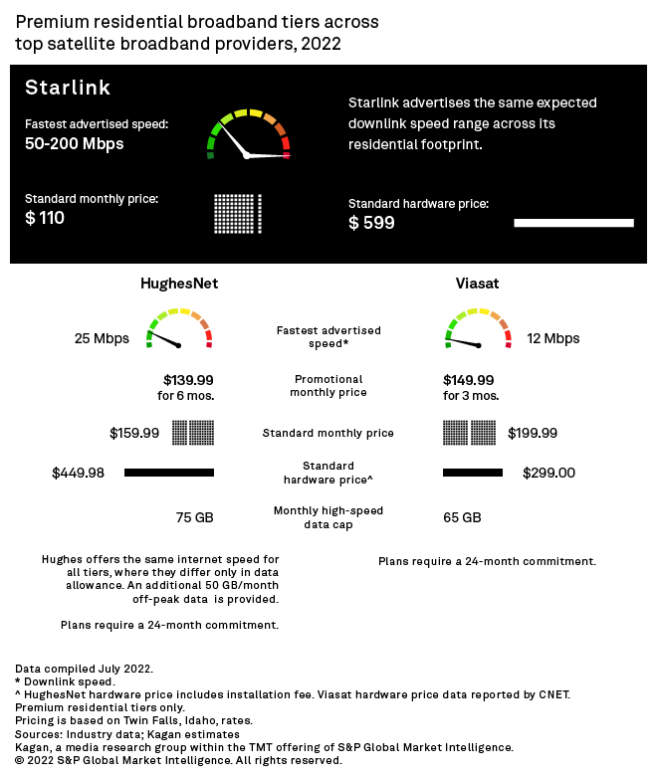 Competitors HughesNet and Viasat had a combined total of 1.59 million subscribers in the U.S. as of the first quarter of 2022. Sector leader Echostar dominated the category with over 1 million domestic active users, out of 1.4 million global subscriptions. Meanwhile, we estimate Viasat served 534,000 customers in the U.S. With its limited internet tiers and delays with the upcoming Jupiter-3 satellite and Viasat-3 constellation, sequential declines have reverberated in operators' combined U.S. subscriber base since the second quarter of 2020. 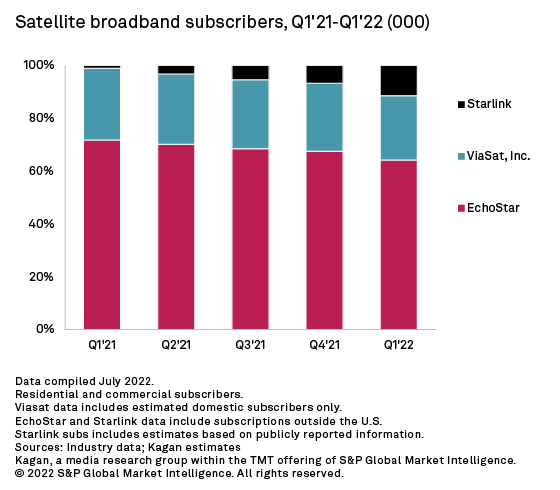