The overall average authorized return on equity for electric utilities edged downward in the first half of 2020.

Commission decisions in several rate cases have been delayed until later this year due to the health and economic crisis triggered by the coronavirus outbreak. To blunt the spread of COVID-19, most of the U.S. was on mandated lockdown. Fears of infection and mandated business shutdowns brought large swaths of the U.S. economy to a halt and resulted in record-breaking job losses. While many states have reopened either fully or on a phased approach, several states with pandemic hot spots had to reinstate certain business restrictions. These recent spikes in virus infection rates across the nation have dampened hopes of a swift economic recovery. While the economic fallout of this unprecedented pandemic will likely weigh on rate case outcomes this year, rate case decisions issued through the first half have largely been devoid of COVID-19 commentary.

The 2020 electric average is at the lowest level ever witnessed in the industry, and with the recent rate cuts by the U.S. Federal Reserve and the pandemic-induced recession, even lower authorized returns may be on the horizon. The average allowed ROEs for the electric sector have been trending downward since the 1980s, consistent with the declining interest rate environment. In addition, the proliferation of automatic adjustment and investment recovery mechanisms that reduce the business risk of a utility have often been cited as a contributing factor by commissions in authorizing lower ROEs.

Included in those authorizations is a decision by the Maine Public Utilities Commission ordering a management inefficiency adjustment that reduced Central Maine Power Co.'s ROE by 100 basis points to 8.25% due to imprudence associated with a new billing system. The PUC ordered that this downward ROE adjustment be lifted when the utility meets all performance benchmarks for all service quality metrics for at least 18 consecutive months beginning March 1 and formally demonstrates to the commission that the problems have been resolved. Calculation of the average electric ROE without the penalty results in a 9.58% ROE for the first half.

This data includes several limited-issue rider cases. Excluding these cases, the average authorized ROE was 9.47% in electric rate cases decided in the first half, versus 9.64% observed in full year 2019. The difference between the ROE averages including rider cases and those excluding the rider cases is driven by ROE premiums allowed in certain states for riders that address recovery of specific generation projects. For further information regarding rate-of-return trends, see RRA's latest Rate Case Decisions Quarterly Update. 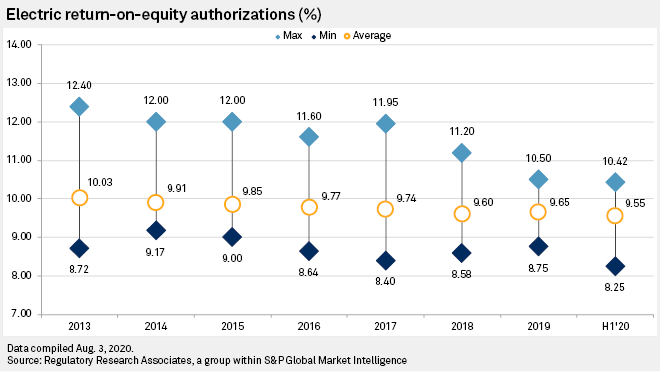 The highest electric ROE approved for an electric company in a case decided in the first half was 10.42%, which was awarded in a limited-issue rider proceeding for American Electric Power Co. Inc. subsidiary Appalachian Power Co. for the utility's 625-MW combined-cycle natural gas Dresden Energy Facility. The generation adjustment clause for Appalachian Power has been in place since 2012 and includes a 100-basis-point ROE adder that is to apply through the first 10 years of the plant's operation. 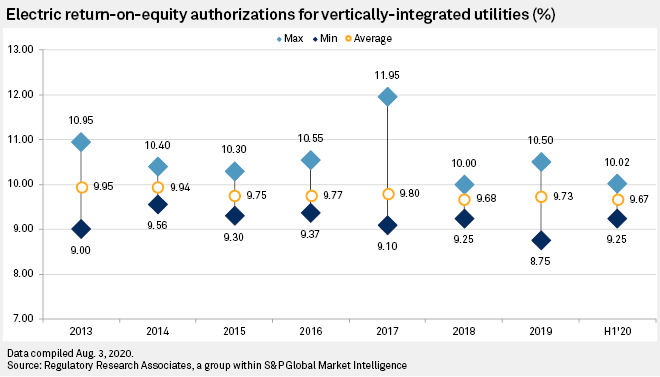 The highest ROE for the vertically integrated group, at 10.02%, was authorized by the Iowa Utilities Board, or IUB, for Alliant Energy Corp. subsidiary Interstate Power & Light Co., or IP&L, following a settlement. This ROE authorized is a "blended" ROE reflecting advanced ratemaking principles under Iowa state law. As allowed under the statute, several of IP&L's generation assets had previously been granted advanced ratemaking principles by the IUB that sets their individual ROEs for the life of the assets. These include the Emery Generating Station (12.23%), Whispering Willow - East (11.7%), Marshalltown (11%) and approximately 1,000 MW of wind assets expected to be placed into service between 2019 and 2020. For the portion of the company's rate base that has not already been accorded a fixed ROE, the IUB authorized the company a 9.5% ROE.

The second-highest ROE determination for this group was 10%, which was authorized by the California Public Utilities Commission for PacifiCorp. PacifiCorp had sought a 10.6% ROE "to account for the risks and operating challenges" the company "faces as a vertically integrated electric investor owned utility."

The lowest authorized equity return for the vertically integrated rate cases, at 9.25%, was authorized by the Kentucky Public Service Commission for Duke Energy Corp. subsidiary Duke Energy Kentucky Inc. According to the PSC, this return is "fair, just and reasonable." In agreement with the attorney general, the PSC noted that "Duke Energy participates in a relatively low-risk regulatory industry, is able to mitigate regulatory lag by filing for forecasted test years, and risk associated Duke Kentucky's generation mix is factored into the current credit ratings, which are A-/Baa1."

Due to COVID-19, Duke Kentucky agreed to not implement new rates prior to May 1, saying the company is "keenly aware" that circumstances related to COVID-19 have "placed a great strain upon government agencies at the federal, state and local levels."

The second-lowest ROE determination for this group was 9.30%, which was authorized by the Colorado Public Utilities Commission for Xcel Energy Inc. subsidiary Public Service Co. of Colorado, or PSCO. In the PUC's view, "this ROE is reasonably sufficient to assure confidence in the financial soundness of Public Service and to maintain an investment-grade credit rating while balancing the interests between shareholders and ratepayers." Furthermore, the PUC opined that PSCO, like "most vertically integrated utilities, is increasingly compelled by financial, business and regulatory dynamics that include energy availability, ability to attract capital to raise funds in order to discharge its public utility duties, and to maintain investment-grade creditworthiness. ... Based on the risk factors … we find that the ROE range adopted in this proceeding adequately compensates Public Service for these risks." For utilities engaged in distribution-only operations, the highest return, at 9.70%, was authorized by the Massachusetts Department of Public Utilities for Fitchburg Gas and Electric Light Co. following adoption of a settlement. Fitchburg is a subsidiary of Unitil Corp..

The lowest ROE authorized in the first half for distribution-only cases, at 8.25%, was authorized by the Maine PUC for Central Maine Power, or CMP. The 8.25% equity return adopted by the PUC is the lowest equity return ever adopted in the U.S. for an energy utility.

The PUC ordered a management inefficiency adjustment that reduced the utility's authorized ROE by 100 basis points to 8.25% due to imprudence associated with a new billing system. The PUC indicated that this downward ROE adjustment would be lifted when the utility meets all performance benchmarks for all service quality metrics for at least 18 consecutive months beginning March 1 and formally demonstrates to the commission that the problems have been resolved. According to the PUC, a management-efficiency adjustment of 100 basis points is the appropriate remedy to address CMP's poor customer service. This downward ROE adjustment is appropriate given the company's failings and the grief it has caused customers." The parent of CMP is a subsidiary of Avangrid Inc. The ultimate parent is Iberdrola SA.

The second-lowest ROE for this group, at 8.80%, was authorized by the New York Public Service Commission for Consolidated Edison Co. of New York Inc., following the adoption of a joint proposal that provided for a three-year rate plan for the company's operations covering the period Jan. 1, 2020, through Dec. 31, 2022.

The PSC has a long history of adopting settlements containing multifaceted, multiyear rate plans that provide regulatory predictability during the course of the plan. According to the PSC, the 8.8% equity return "is reasonable given the current financial market conditions as well as the increased financial and business risks inherent in setting rates over a multi-year period." For a chronological listing of the major energy rate case decisions issued during the first six months of 2020 as well as historical summary data going back to 1990, see RRA's latest Rate Case Decisions Quarterly Update.