TV networks are feeling the effects of an advertising slump as advertisers shift resources to more critical business functions during the COVID-19 crisis. Meanwhile, production has ground to a halt, disrupting the whole ecosystem. The only notable upside will be a surge in TV viewing, borne out in the data for the United Kingdom, France and Italy, in particular, where certain channels grew viewing by more than 100%.

Key advertising industries such as travel, tourism and retail are fighting against total collapse. The test for TV networks will be how effectively they can facilitate deals on current inventory, while also providing more beneficial terms on future inventory. Broadcasters can cut associated costs for advertisers — much as Channel 4 (UK) is cutting late booking fees, as reported by CampaignLive.co.uk — or offer incentives such as first preference on important slots such as Christmas time in exchange for taking spots in April/May.

On March 5, 2020, ITV said it expected a decline in advertising of at least 10% in April, versus 2% growth in March, with "travel advertising deferments" and the delay of the new James Bond film both playing a major role. ITV also has to contend with the financial impact of postponements to the European Football Championships that were due to start in June and have now been pushed back to 2021. Major sporting events are a key driver of revenue for ITV as they generate large audiences and premium advertising rates.

In a March 23 trading update, crucially, ITV noted that advertising deferments had moved to other categories, beyond travel, and that further guidance would be provided in May with its first-quarter results.

ITV said every 1% slip in total advertising revenue for the year cuts earnings and profit by approximately "£17 million, before any mitigation."

For some networks, the lockdowns present an opportunity for creativity: exploring new formats or content produced for online platforms or accelerating the drive toward more virtualized and remote production capabilities to sustain output.

On an audience level, the prime "general entertainment" channels stand to benefit the most as they tend to provide a mix of news, current affairs and some of the most popular TV series. Higher audience figures for these channels should negatively impact more niche services.

"As a domino effect, it will impact the industry as a whole: all creators-freelancers with no job tomorrow nor any social security: technical suppliers, advertisement agencies, publicity agents, theatres, altogether millions of employees."

For a summary of EPC proposals, please refer to "Content production grinding to a halt," below.

Italy, the European nation hardest-hit by COVID-19, shut down at least two weeks earlier than France, Germany, Spain or the U.K., making the virus's impact on TV viewing clearer across the board in the market. Publicly available data from local audience measurement provider Auditel Srl showed one particular channel, La7, which carries a significant slate of news and cultural programming, increase viewing hours by 677.9% from the Dec. 22-28, 2019, to the March 8-14, 2020, period. La7 is a solo channel, while other groups operate multiple networks, which impacts the scale of growth when considering group totals. 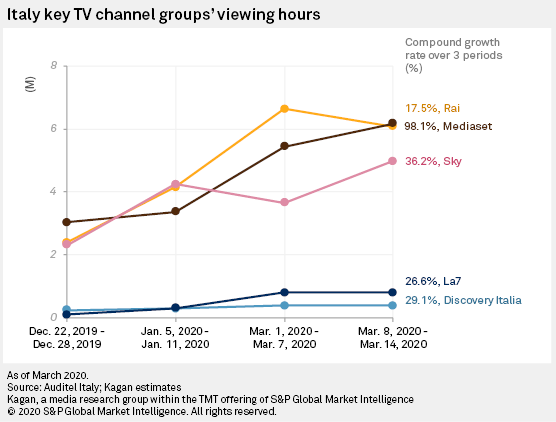 Overall viewing hours in the country surged from 8.15 million to 18.46 million. Viewing of Mediaset news channel TGCom24 grew by 360.6%, with 12 of the tracked channels overall increasing viewing by more than 100%. 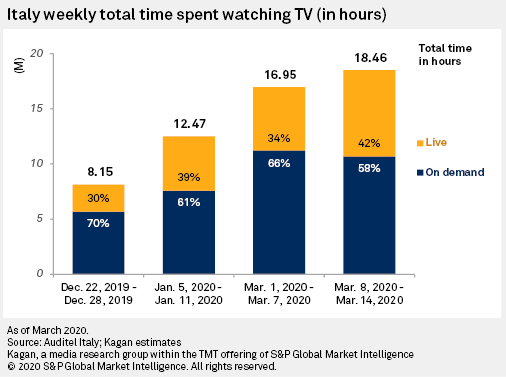 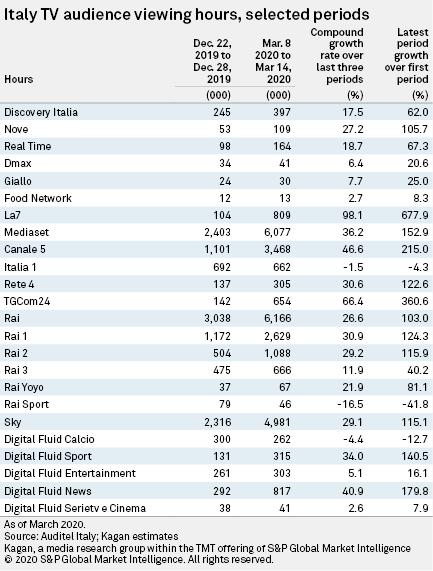 What is more striking in France is the significant drop among the rest of the national free-to-air channels on the digital terrestrial TV network — which passes 95% of France's population — as well as the collectively grouped "TV Others: Thematic channels, local and foreign" and "Canal+" thematic channels (Cinéma, Sport, Décalé, Family and Séries). Nearly all declined, several quite significantly — such as NRJ12, which lost 25.0% of its share — while two showed no growth. 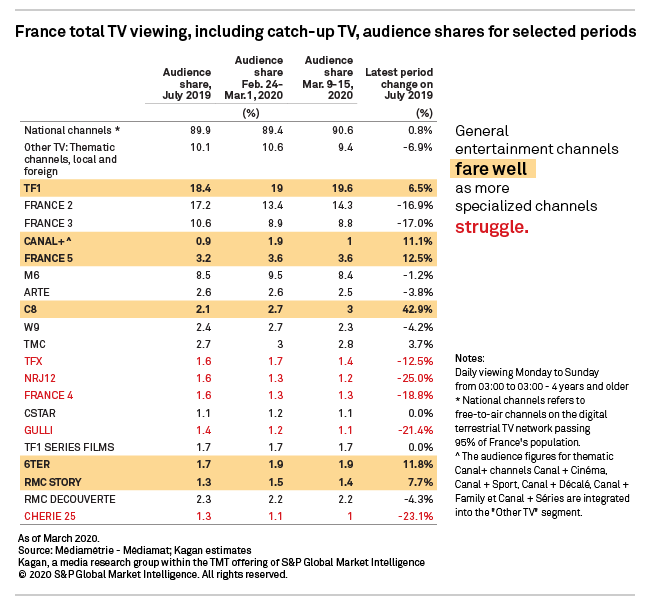 In France, total TV viewing (including catch-up TV) has actually declined in the last two periods shown in the table, from three hours and 51 minutes to three hours and 45 minutes per day. We expect this anomaly, in the COVID-19 context, to change as restrictions on movement increase. 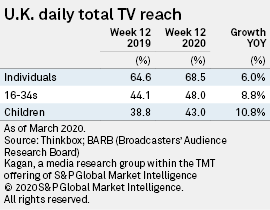 On a channel-by-channel basis, BBC News (UK) grew viewing time most, up 44.4%, while Sky News (UK) was up by 30.5%. Top U.K. commercial broadcaster ITV PLC experienced declines across all its channels except ITV3 (UK), up 9.8%. 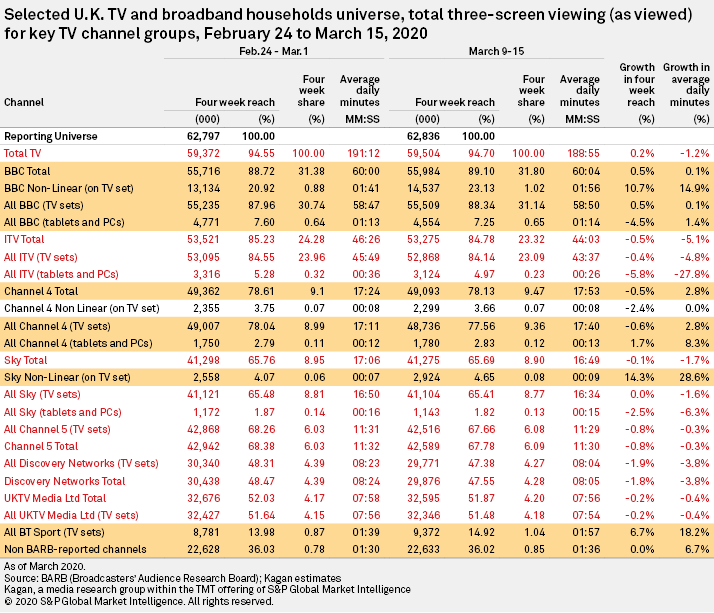 ITV reported that ratings for March 18 for ITV News doubled from the same period last year, including almost 20% growth for "ITV Evening Regional News" and "ITV News at Ten." The broadcaster noted that ITV Daytime had hit its largest audience in six years, driven by live programming. ITV said it is relying on a solid slate of scheduled drama and entertainment (pre-recorded) in the coming months.

To ensure it is prepared to bank on any emerging trends for on-demand services, ITV is keeping a close eye on the performance of its digital platforms, catch-up player ITV Hub, addressable ad platform Planet V and SVOD OTT service BritBox LLC in 2020.

Incidentally in the U.K. "non-BARB-reported channels," a category that includes Netflix Inc. and Amazon.com Inc.'s Prime, grew by 6.7% from Feb. 24-March 1, 2020, to March 9-15, 2020. OTT providers in Europe, including Alphabet Inc.'s YouTube, The Walt Disney Co.'s Disney+, Netflix and Amazon Prime have all joined EU efforts to limit the impact on broadband networks through compression or by limiting streaming quality to standard definition.

BBC director-general Lord Tony Hall said the BBC will keep services going but could scale back its output, in a response to MPs at the Digital, Culture, Media and Sport (DCMS) Committee, just hours after the deadline to apply for the role of his successor closed. On the impact of the virus on staff, he added that he could imagine a local station or some other part of the network of news operations being "out of action" for a period, but said the broadcaster is prioritizing the delivery of information to the public.

In a March 23 trading update, ITV said the greater curtailment of work is "now having a significant impact on ITV Studios' ability to film productions," with domestic and international productions both suffering as the company moved to put in place plans that ensure the ability to produce as much programming as possible, "particularly our news output and live productions." ITV Studios costs would be "variable" as library sales increase as a result of the current climate. Meanwhile, as a major producer of unscripted content, ITV was confident that it could rapidly increase output due to a shorter lead time.

Boosting cash reserves and cost savings is critical to ITV's planning, with content spend cut by more than £100 million, including "savings from sport", "the late delivery of commissioned programming" and other cost-cutting measures. ITV cut £20 million from discretionary spend and £30 million from capex, has £10 million in pre-planned savings for 2020 and has canceled dividend payments, providing a pot of at least £300 million. ITV reported strong liquidity access with "£150 million of unrestricted cash, a £630 million Revolving Credit Facility expiring in December 2023, of which £100 million is currently drawn, and a £300 million undrawn bilateral facility expiring in June 2021" as well as no bond repayments before September 2022.

As shown below, the European Producers Club 's appeal to the EU Commission and its members to consider its mitigation measures for the audio-visual sector, across four areas, sheds light on the extent of potential disruption. 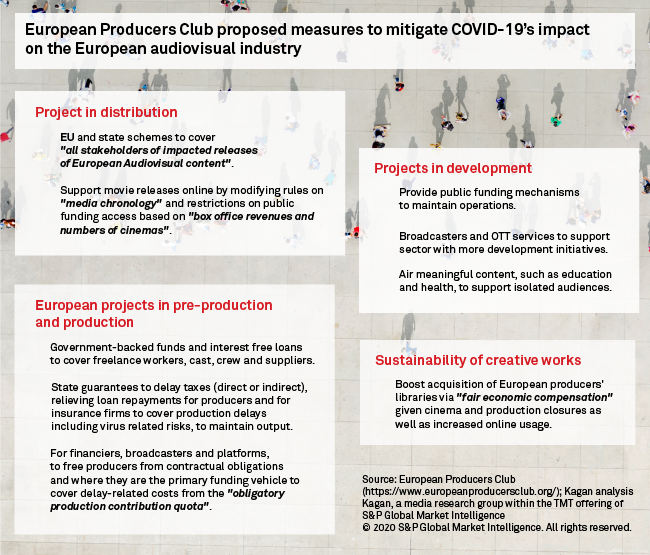 While the production of original hours will drop, most networks have sufficient content libraries to sustain programming. We expect high demand for documentaries with up-to-date crisis narratives. There are also rights implications for content already licensed to third-party broadcasters. Costs for shows' license agreements are amortized based on the number of transmissions up to a certain date and can include a few repeats of a series, so TV networks might have to bring the repeat forward from when they originally planned to fill the schedule, which also means bringing forward amortization costs.

Company values are naturally coming under increased market pressure. In this context, German commercial broadcaster ProSiebenSat.1 Media SE has canceled its sale of producer and distributor Red Arrow Studios, on the block since September 2019. Industry daily TBI Vision, which broke the story, noted that the broadcaster had decided to hold on to the unit for now after the sale was deemed unviable in the current climate. Given the virus's impact on financial markets, investment appetite is very limited even if the need for some to divest is high and many assets may represent bargains.

Share prices for key commercial broadcasters in Europe (ITV in the U.K., Télévision Française 1 Société anonyme (TF1 Group) in France, Mediaset SpA in Italy and RTL Group SA in Germany, Netherlands and Belgium) have all tumbled in recent weeks. Trading volumes also increased notably from February as the scale of the crisis in Europe became clearer and falling share prices drove sell-offs.