Gold performed in a fashion similar to the 2008 financial crisis, in that funds with positions in gold in the futures markets were forced to sell their gold to meet margin calls, raise cash and buy U.S. treasuries.

Silver, despite record retail investment, has sunk to its lowest price in 11 years due to lower industrial demand.

In this part, we use S&P Global Market Intelligence data and insight to look at how the metal price environment for the precious metals and uranium has evolved during the COVID-19 pandemic. While the gold price dropped mid-March along with those for most other commodities and markets, it has since come back strongly on the back of higher financial investment demand. Meanwhile, silver, despite record retail investment, has sunk to its lowest price in 11 years due to lower industrial demand. Looking at the platinum group metals, or PGM, lockdowns in South Africa and plummeting global auto sales have severely shocked prices. This disruption has kept an uneasy balance, however, and has not yet fundamentally changed the price trajectories of upward for palladium and rhodium, and downward for platinum. 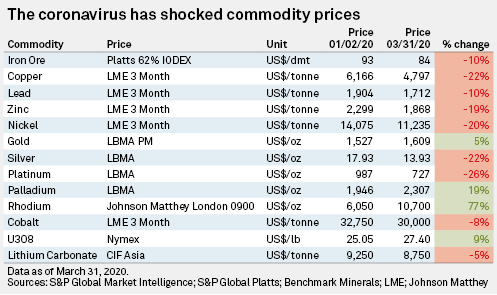 Gold: After the fall, time to shine

Despite being the archetypal safe-haven asset, gold, like everything else, eventually took a hit to the downside on the realization that COVID-19 would become a global pandemic. Through mid-February, gold continued in its slow-burn bull market, driven by two main factors. The first was safe-haven buying resulting from global uncertainty, tied to the shutdown in China up to that point, and also the ongoing U.S.-China trade war and eurozone weakness. The second was low to negative yields on high-quality government bonds. When funds have to pay for lending to governments, the attractiveness of gold increases, especially when the cost to hold is at a historical low. 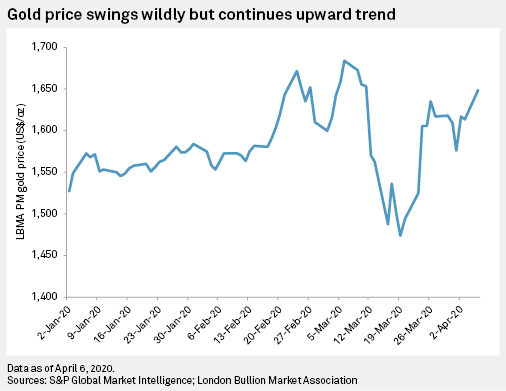 While gold performed well in the lead-up to the stock market crash — reaching a seven-year high of US$1,684 per ounce March 6 — when it became clear March 12 that the U.S. economy would take a serious hit, gold began to fall at the same time as equities. Gold performed in a fashion similar to the 2008 financial crisis, in that funds with positions in gold in the futures markets were forced to sell their gold to meet margin calls, raise cash and buy U.S. treasuries. We look in more depth at this phenomenon in an earlier article. This selling on the futures market overwhelmed significant positive sentiment on the Commodity Futures Trading Commission, major retail buying in the West and large inflows into gold exchange-traded funds, or ETF. From the week beginning March 23, however, the gold price rebounded at the same time as a bear market rally in U.S. stocks. Since then, gold is back up above the highs before the stock market crash, with the Comex price reaching US$1,752.6/oz on April 7 on an intraday basis. 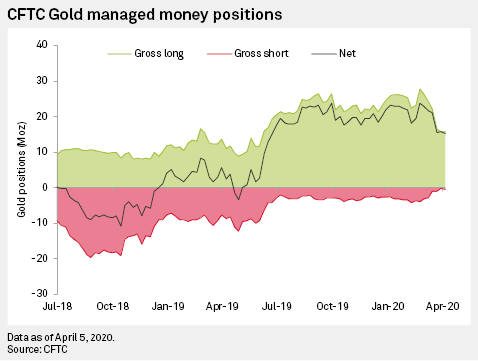 Looking at managed money positions, the net long on gold has been fairly flat since August 2019, changing little until the mid-March stock market crash. The net longs dropping to their lowest level since July 2019 was more related to a drop in the volume traded. In fact, the gross short position of 1.56 million ounces in the week starting March 29 was the lowest in over 10 years. So, clearly, the positive market sentiment for gold remains.

Meanwhile, gold continues to flow into ETFs, with 132.5 tonnes moving in between Feb. 28 and March 27, according to the World Gold Council. On March 27, total holdings stood at 3,165.5 tonnes, the highest amount ever. On the retail side, sellers are reporting huge demand for bars and coins, with many lines out of stock or with long wait times. This shortfall has been exacerbated by the temporary closure of the main gold refineries Valcambi SA, Argor-Heraeus SA and PAMP SA in Switzerland, due to the lockdown in that country. They have signaled in recent days, however, that they will partially re-open, helping miners to bring their gold to the market and investors to buy it.

Despite the mid-March fall in the gold price, in tandem with the stock market crash, the yellow metal has recovered and the market appears convinced that it is on an upward trajectory. There are some negative signals for the market, however, namely reduced jewelry buying in India and China due to pandemic lockdowns. In addition, we forecast a mine production shortfall stemming from shutdowns in major mining countries.

Silver: Double hit with not much light at the end of the tunnel

The silver price, which has largely traded sideways since 2015, has plummeted to multiyear lows. Starting March 12, when U.S. stock markets had their greatest single-day fall since the 1987 crash, silver fell from US$17.02/oz to US$12.01/oz on March 19, a fall of 29%. That is the lowest price for silver since April 17, 2009. Although the price has recovered slightly in recent weeks, at around US$14/oz it remains near the lows of 2019 and has wiped out the brief rally enjoyed in the second half of 2019 and the first two months of 2020. 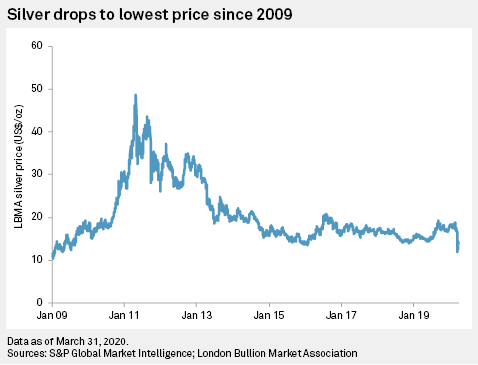 Being both a financial and an industrial metal, silver has been dealt a double blow. With manufacturing purchasing manager indexes down across the board, silver industrial demand, which largely comes from brazing alloys and electronic and photovoltaic fabrication, is forecast to decline. On the financial side, traders have been closing out their positions on the futures markets to meet margin calls and to raise cash to buy government bonds — much like the situation with gold.

Having said that, demand for physical silver in the Western world had skyrocketed when stock markets crashed and silver prices went down, with bullion and coin merchants reporting unprecedented demand. Indeed, at the time of writing, none of the main U.K. online dealers had any silver bars in stock. This has been matched in the ETF markets, with reports of huge inflows.

While silver was dragged down during the stock market crash, the weakness of industrial demand has acted as a lead weight for silver, leaving it unable to ride gold's coattails upward on the back of safe-haven buying. According to The Silver Institute, in 2018 the ratio of industrial demand over investment demand was 2.5. In the short term, the outlook for the precious metal is bleak given the weak economic conditions. If this crisis continues into the third quarter, however, we expect that reductions in mine supply due to a national shutdown in Peru, the second-largest producer of silver, will have an impact on the net balance.

Even before the COVID-19 crisis spread across the global economy in March, the PGM markets were experiencing a volatile period. The ultimate repercussions of the "dieselgate" emissions cheating scandal were being felt, in that car manufacturers were being forced to comply with emissions standards across a broad range of conditions, not just a single lab test. Those emissions are controlled by catalytic converters, which use PGM to reduce emissions of unburned hydrocarbons, nitrogen oxides and carbon monoxide. In order to meet these standards, higher loadings of PGM are needed, so that despite a global car sales recession in 2019, demand for PGM has risen. 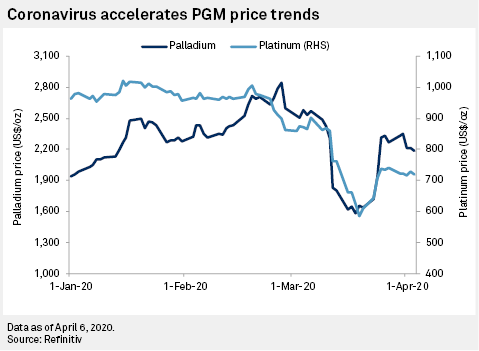 The different uses of platinum and palladium in autocatalysts had led to their large price divergence in recent years. Palladium is used more in gasoline vehicles, while platinum has a higher weighting in diesel vehicles. In the short-to-medium term, consumers are moving back to gasoline vehicles in markets like Europe, driving up demand and, with limited supply, the price.

Palladium reached an all-time high of US$2,781/oz on February 27, continuing a string of all-time highs since January 2018. The fresh highs were caused by Anglo American Platinum Ltd.'s, or Amplats, announcement that it was declaring force majeure at its Waterval smelter due to a dust explosion. This caused analysts to forecast an even wider palladium market deficit in 2020. The market moved sideways for the next week, as the Dow Jones Industrial Average dropped as a result of the Russia-Saudi Arabia oil price war. The March 12 stock market crash caused the London Bullion Market Association price to drop by US$339/oz in a single day, the largest single-day decline ever, due to global recession fears. For the next week, prices found a floor at US$1,600/oz, before rebounding in a classic U-shaped recovery.

Platinum fell from US$879/oz on March 11 to US$593/oz on March 19, the lowest price since December 2002, a 17-year low. Since then, the price has managed to stay above US$700/oz, which is less of a recovery than palladium has enjoyed. Market participants are concerned that sales of diesel vehicles will be hit harder than sales of gasoline vehicles, since the former are more popular in Europe, where the current restrictions show no sign of being lifted. Indeed, car sales figures were down year over year in March, by 85% in Italy, 72% in France, 69% in Spain and 44% in the U.K.

On the supply side, following the stock market crash South Africa, the world's top miner of all PGM, declared a 21-day lockdown due to COVID-19, which led to Amplats, Impala Platinum Holdings Ltd. and Sibanye-Stillwater Ltd. all declaring force majeure March 30, which will further constrict supply. However, this comes as just at the time when vehicle demand is down the most in decades, and therefore demand for PGM is down. It appears, therefore, that the market is trying to find a new equilibrium, with slightly lower prices. 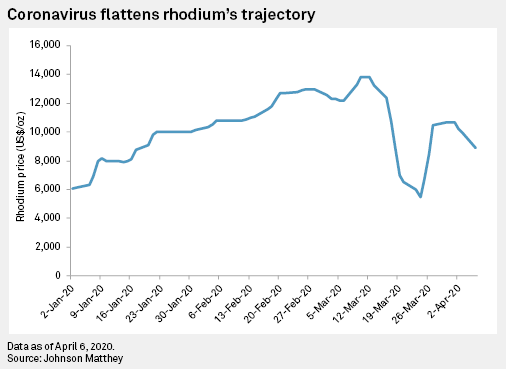 Much like palladium, rhodium had been increasing in price at an exceptional rate since the start of the year. This was driven by tightness in the thinly traded market, caused by restricted supply and increased demand as a result of more stringent enforcement of vehicle emissions standards. Just days before the Schengen travel ban was put in place by the U.S. government, rhodium reached an all-time high of US$13,800/oz, up a staggering 128% since the start of the year. Since then, in a pattern similar to many others, the price quickly dropped, falling by 60% in eight business days to US$5,500/oz on March 24. With mine supply drying up, the only certainty is that market volatility will remain.

U3O8: The best performer since the crash 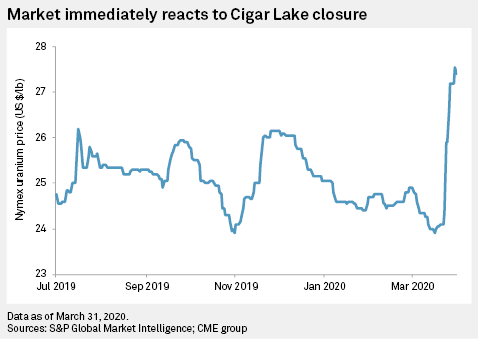 However, Cameco Corp. announced March 23 that it was placing the Cigar Lake mine in Canada, the world's largest uranium mine, producing 13% of global supply in 2019, on care and maintenance. This was done to protect workers from COVID-19, which was difficult without closure due to the operation's remote location in northern Saskatchewan, where miners fly in to work. The closure caused a rally in the price, to above US$27 per pound for the first time in one year, as market participants worried about possible supply shortages.

On April 7, JSC National Atomic Co. Kazatomprom announced that was reducing its 2020 guidance by 4,000 tonnes of elemental uranium, which makes up 18% of its previous guidance. The Kazakh company, the world's largest uranium producer, previously stated in a March press release that COVID-19 could cause significant disruption to its remote mining sites in southern Kazakhstan, due to the close quarters in which its employees work. The press release caused the price to leap still further to US$29/tonne on April 8.

While global demand for power has declined due to widespread industrial shutdowns, baseload electricity demand remains. Production of uranium is highly concentrated among a small number of companies and countries; if mines continue to close temporarily, we expect upward pressure on prices to remain.

Understand the impact of COVID-19 on the Metals & Mining sector