Multichannel, telecoms companies could see revenues drop because of COVID-19

Companies, regulators are easing conditions to customers hurting by pandemic

Latin America and Caribbean multichannel and telecommunications companies are taking steps to ease conditions and offer facilities to customers in lockdown amid the COVID-19 global pandemic. Chile companies are leading the way in the region, by adhering to a series of government-supported measures designed to avoid service interruptions for consumers impacted by the economic downturn. Kagan scenario analysis shows the pandemic could leave a mark on operator revenues to the tune of a 2.6% to 14.2% drop, depending on the duration of the lockdown measures.

Steps taken by companies across major Latin American markets range from free access to COVID-19 informational websites and educational content, to helping parents with children at home because of school shutdowns, to discounts on telecom service fees and improved conditions for debt negotiation, as well as free upgrades in broadband speeds, data caps and multichannel packages. 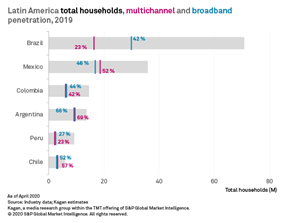 In Chile, one of the markets hardest hit by the pandemic in the region, as well as one of the most connected, with a multichannel penetration of 57.1% and 52.1% of households subscribing to fixed broadband, the government announced in late March a "Solidarity plan" to keep the poorest 40% of the country's households connected. The offer, available for 60 days, includes 2 Mbps fixed internet, the ability to make calls and send messages for contract mobile plans, as well as free access to social networks for prepaid plans. The country's largest telecommunications companies, including telcos Claro Chile SA, Telefónica Chile and Entel Chile, MSOs GTD Grupo Teleductos SA and VTR, and mobile carrier WOM SA, all adhered to the plan.

Both Claro and GTD also made additional channels available free of charge to their multichannel customers for a limited period. Meanwhile, incumbent telco Telefónica Chile has doubled broadband speeds for fiber subscribers, which represented 50% of its subscriber base in the fourth quarter of 2019, while VTR has announced up to 80% discounts for unemployed customers.

In Brazil, the most populous market and the worst hit by the outbreak in Latin America, telecommunications agency Anatel announced a series of measures to keep telecommunications running during the emergency. Among them is an agreement with the largest telecommunications companies to address the difficulties faced by customers unable to pay their bills because of social isolation. Consumer advocacy groups have sued to ban service cuts due to delinquency, but a federal court suspended the ban. The regulator is also monitoring ISPs' contingency plans to avoid overwhelming broadband networks due to increased demand.

Several companies, including telcos Telefônica Brasil and Oi SA, have eased payment terms for delinquent customers, including the ability to pay overdue bills in installments. Brazil's largest ISP, cable operator Claro Brasil, was gradually increasing speeds for broadband subscribers and opened up its public Wi-Fi hotspots to all users for free. Pay TV networks have also partnered with multichannel operators to make dozens of pay TV channels available for free to customers from mid-March through April.

Some state governments have also been partnering with mobile carriers to use anonymous location data gathered from mobile phones to monitor crowds. The Ministry for Science, Technology, Information and Communications announced plans to expand the project nationwide, but the initiative was suspended by the government due to privacy concerns.

On the other hand, the government is considering forcing telcos to provide the official statistics agency, IBGE, access to clients' addresses and telephone numbers to carry out their regular monthly household surveys, since in-person interviews have been suspended. Operators argue, however, that they do not have this data available for many prepaid mobile subscribers.

The country's telecommunications agency, the IFT, announced in early April an agreement with mobile service providers AT&T Mexico, Telefónica México SA de CV and América Móvil SAB de CV's Telcel to offer an "emergency plan" for prepaid mobile users, including 100 minutes for national calls and 150 SMS messages. It also extended by three months the deadline for The Walt Disney Co. and 21st Century Fox Inc. to start removing the Fox Sports lineup of TV channels from their respective grids in the country. The measure, part of the conditions imposed by the regulator to allow the merger of the two companies in Mexico, had a previous deadline of May 1.

Colombia's Ministry of Information Technology and Communication, MINTIC, announced a list of 10 measures to support continuity of service during the crisis. Among them are the reduction of video quality to standard definition for VOD services, a 30-day moratorium for postpaid mobile subscribers, 200 free direct messages for prepaid mobile subscribers, suspension of license fees for operators, and free access to 20 educational and COVID-19-related websites, which will remain available to all users.

In Argentina, the government-owned satellite and broadband operator Empresa Argentina de Soluciones Satelitales AR-SAT SA joined forces with Telecom Argentina, Telefónica de Argentina SA and Claro Argentina, as well as business-to-business service provider Datco SA, to guarantee service by allowing the rerouting of wholesale across their backbone networks, should they become overloaded. Regulator ENACOM has also reached a deal with mobile carriers to revert fixed telephony and prepaid mobile prices to year-end 2019 values, as the country's double-digit inflation rates often lead to multiple price adjustments per year. This measure impacted 59% of lines in service. Roaming charges have also been lifted and mobile access to official Health and Education Ministry websites has been zero-rated.

Confronted with the reality of the digital gap, the Peruvian government took unprecedented actions to facilitate virtual learning during the lockdown. On April 19, it announced the purchase of 840,000 tablets with internet connectivity to be distributed to low-income students who lack access to the internet.

The state of emergency is putting pressure on customer service systems and network capacity. According to an article in local newspaper El Comercio, call center capacity was at 95% by mid-March, a factor that could limit operator capacity to respond to customer requests. According to data from OSIPTEL, fixed network traffic increased by 30% to 42% between March 23 and March 27. Facebook Inc.'s WhatsApp, Netflix Inc. and TikTok Inc. saw the largest increases in data traffic during that period.

In crisis-hit Venezuela, which went into a government-ordered lockdown in March, leading DTH provider DIRECTV Venezuela announced that it upgraded all users to its top service plan, "Oro Mas," until March 31. In Uruguay, state-operated internet provider Administración Nacional de Telecomunicaciones offered a 50 Gbps speed bonus to all users of its Universal Hogares broadband plan.

Click here to read more of our COVID-19 coverage.

According to Kantar IBOPE Media, TV ratings and average time spent watching TV increased across Latin American markets covered by the company in late March, compared to the beginning of the month, as broadcasters across the region shifted their programming schedules to focus on coverage of the pandemic. In Brazil, however, where more recent data is available, TV ratings have since stabilized, although they remain higher than prior to the crisis.

Streaming services have also seen a surge in video consumption and, as in other global markets, OTT providers such as Netflix have reduced streaming quality to avoid overwhelming broadband networks, which have so far suffered no significant capacity issues in the region. Netflix reported 2.9 million net additions in the first quarter of 2020 in Latin America, the highest quarterly subscriber growth in over two years.

With sports events canceled around the world, many networks in Latin America have announced they will suspend payments for sports rights during the COVID-19 crisis. In Brazil, Globo Comunicação e Participações SA declined to pay the final quota for the broadcast rights of the local São Paulo state soccer tournament, Campeonato Paulista, which was in its final rounds before quarantines were put in place. Perform Group Ltd.'s sports OTT service DAZN also announced it will withhold all rights fee payments until the events resume. The streaming platform, which is so far only available in Brazil, was set to launch in 200 countries on May 2.

Operators and premium sports networks have also suspended subscriptions in some Latin American countries. In Argentina, the multichannel market leaders, Telecom Argentina's cable operation Cablevisión and AT&T Inc.'s DTH operation DIRECTV Argentina, announced they will not charge clients for the Football Pack starting in April, and will only resume the subscriptions once the Superliga Argentina soccer championship returns. Colombia's newly launched Win Sports+ network has also requested that pay TV operators in the country not charge customers in April, as the network's main attraction, the national Dimayor soccer tournament, has also been suspended.

Foreign exchange volatility in Latin America and the Caribbean during the COVID-19 crisis has skyrocketed. We estimate currencies of the top six economies in the region depreciated 14% on average between year-end 2019 and April 16, 2020. Depending on the duration of the stay-at-home orders and path to recovery, we estimate currency depreciation impact on revenues should range from -3% to -9%. 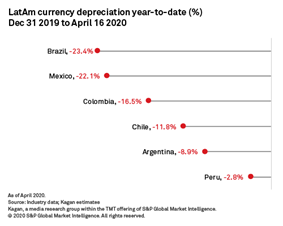 Disappearing store traffic, stay-at-home restrictions, and increasing unemployment could reduce fixed service subscriber gross additions in 2020. The impact of the crisis on net additions will depend on the duration of stay-at-home orders as governments and operators' measures should curtail fixed services churn in the short term.

Lower store traffic might hamper gross additions due to underdevelopment of online stores in the region. Mobility data from Alphabet Inc.'s Google shows retail and recreational visits in Latin America and the Caribbean decreased 68% on average.

Unemployment is another factor that could affect gross additions. The Economic Commission for Latin America and the Caribbean, or ECLAC, expects LatAm's unemployment rate to add 3.4 percentage points in 2020, compared to 2019, taking the region's unemployment rate to 11.5%. The additional 11.1 million unemployed people could certainly affect the demand for fixed telecommunications services.

The impact of the crisis on net additions is more nuanced as governments and operators are implementing measures to allow people to stay communicated. From extended payment terms to service termination restrictions, as well as several income support programs, measures from governments and operators are expected to minimize churn in the short term. In markets where unbundled residential services are available, fixed voice and multichannel services, already in decline prior to the pandemic, are likely to see the most negative impact, while fixed broadband, increasingly seen as an essential service, is expected to be the least impacted.

Our analysis of three possible scenarios for the Latin American Telecommunications industry shows the COVID-19 crisis will likely hurt operator revenues. Our results show revenue declines could range between 2.6% to 14.2% depending on the duration of stay-at-home measures. 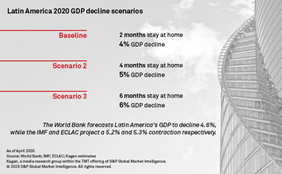 Currency depreciation estimates are based on the duration of the lockdown measures, assuming markets return to normal levels when the economies reopen.

ARPU, costs and capex estimates are based on a review of financial data for telecommunications companies in previous crises, namely the dotcom bubble (1999-2000), the Great Recession (2008-2009) and the Brazil recession (2014-2015).

We also performed a review of economic papers, studying the relationship between GDP and demand for telecommunications services.

Kagan Survey – Cable Networks Could Be In For Rough Ride

Listen: Episode 9 - How COVID-19 Is Changing The Dynamic Of Streaming Players