Coronavirus Could Disrupt Supply Chains For Autos, Electronics and Chemicals


Coronavirus Could Disrupt Supply Chains For Autos, Electronics and Chemicals

The spread of the novel-variant Coronavirus (nCoV) that started in Wuhan, China has now reached nearly 4,500 cases in mainland China and increasingly around the world, according to Johns Hopkins University data as of Jan. 28.

While the virus is still in its early stages of spreading, the Chinese government has already extended the Lunar New Year holiday to Feb. 2 from Jan. 30 to reduce travel and potential spread of the disease according to Xinhua. 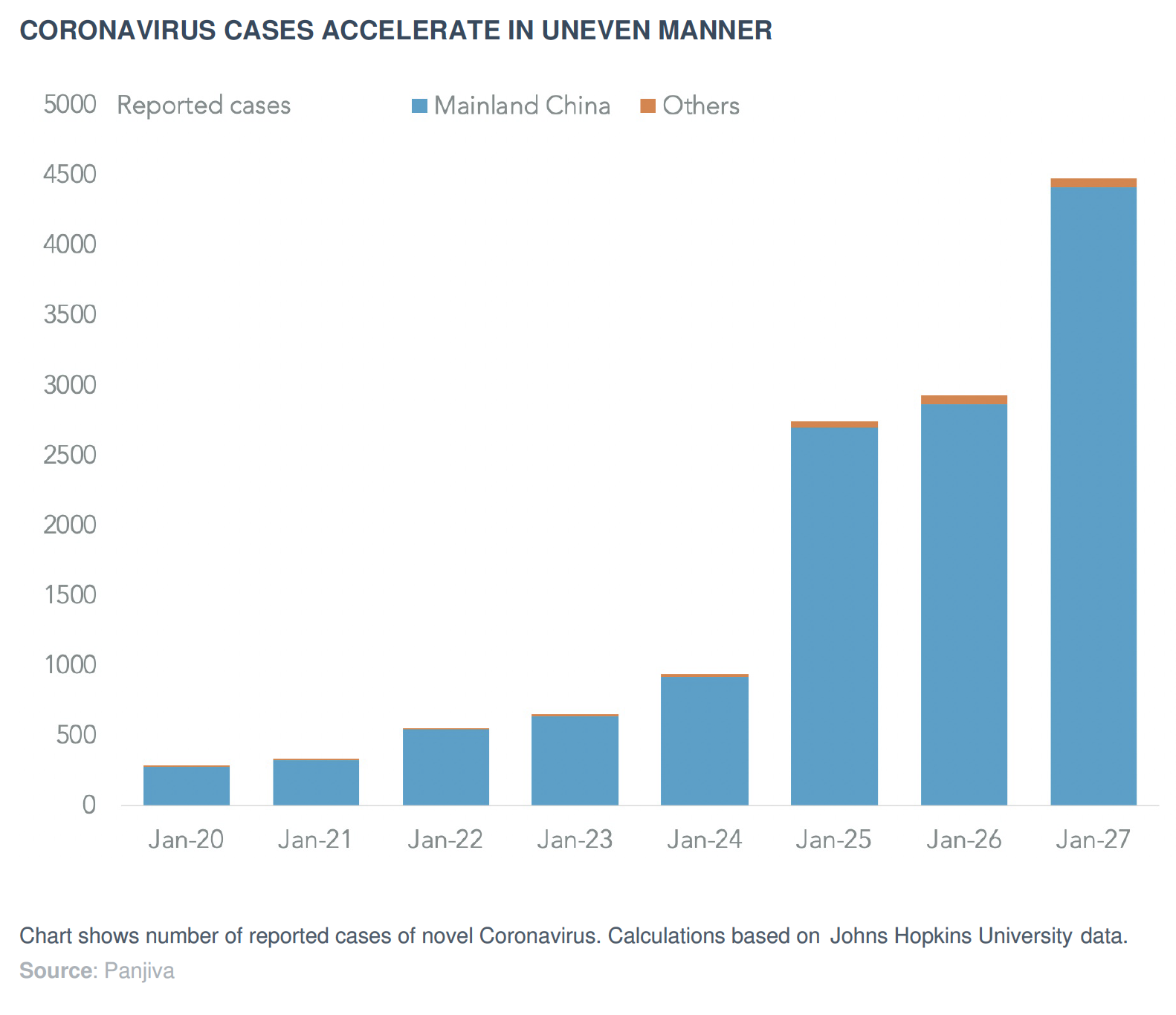 The impact on supply chains more broadly will be a function of (a) how long businesses remain closed (b) the extent to which there’s an impact on downstream supply chains and (c) the extent to which precautionary measures are taken by corporations including logistics firms. The lockdown by the Chinese government has already led several Japanese companies to institute contingency plans, Nikkei reports.

Commodity markets have indicated some concerns regarding the impact on demand for raw materials from a Chinese manufacturing and / or consumer demand slowdown. Panjiva analysis of S&P Global Market Intelligence data shows that crude oil prices fell by 7.4% on Jan. 26 versus Jan. 20 while copper prices have fallen by 5.7% over the same period. 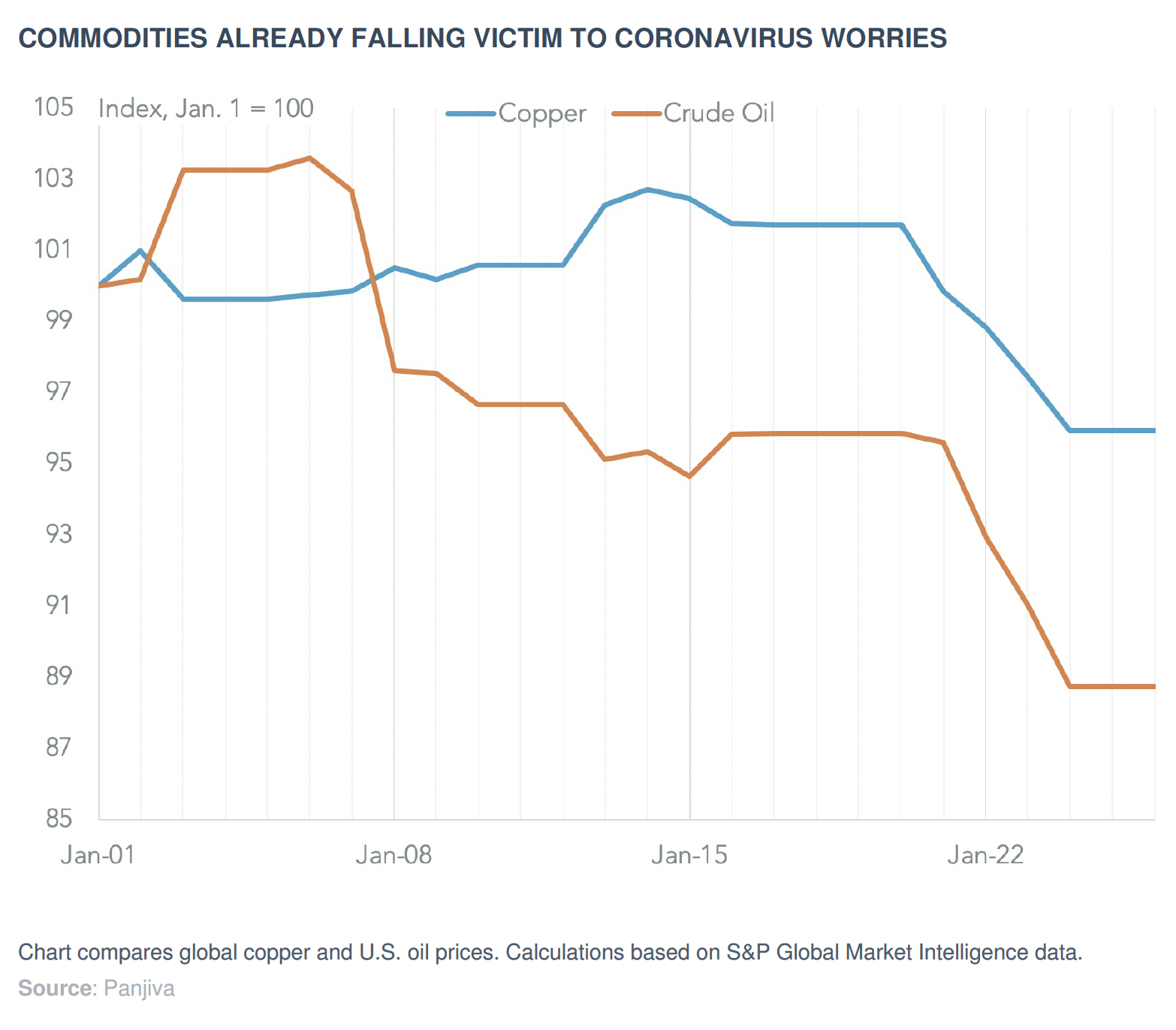 S&P Global Ratings has noted that the primary impact will likely be felt by consumer demand including via travel. Logistics may be exposed via a restriction on shipping through the region surrounding Wuhan – though that may relate more to delays for inspections than outright bans – while the automotive industry may be particularly exposed due to a concentration of activity in the region, S&P Global Ratings notes.

Panjiva’s analysis of official shows that Chinese auto-parts exports in total were worth $53.1 billion in 2019 and had suffered a decline of 12.6% year over year in 4Q, in part due to U.S. tariffs.

Panjiva’s data shows that U.S. imports of auto-parts from China slumped 40.3% year over year in November after a 31.3% slide in 3Q. That’s been partly offset by increased shipments from North America, though imports are declining more generally due to weaker auto sales.

One piece of collateral damage from the disruption related to nCoV may be the U.S.-China trade deal. As outlined in Panjiva’s research of Jan. 16, China has committed to a 88.3% increase in imports of manufactured goods from the U.S. in 2021 versus 2017. A prolonged demand interruption could make delivering those targets more difficult. 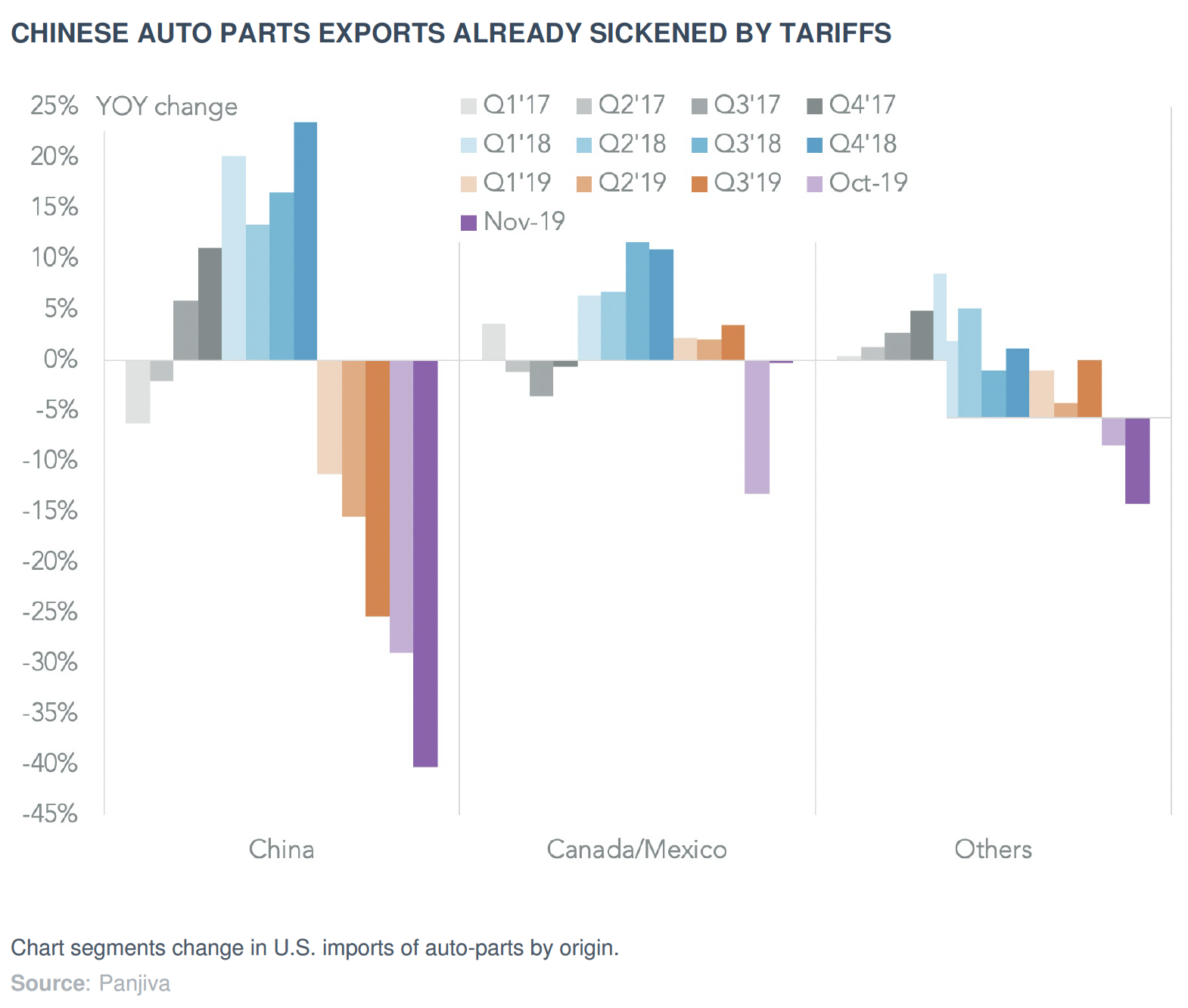 An analysis of Panjiva shipment data shows over 450 U.S. importers were supplied by companies located in Hubei province, of which Wuhan is the capital city. The top five companies importing to the U.S. from the Hubei region around Wuhan were HonHai, Green Mountain Grills, China Electronics, Genuine Parts, and Avantor.

The Hubei province accounted for 27.4% of maritime TEU shipped to the U.S. in 2019 associated with Hon Hai, with relatively little sourcing from countries other than China.

As expected from a state-owned enterprise, shipments associated with China Electronics Corporation also were mostly from China with 36.9% coming from the Hubei Region.

Companies with more significant exposures include Green Mountain Grills, who received all imports in 2019 from Hubei, and Avantor, where Hubei accounted for 68.8% of imports. Of the top five importers, Genuine Parts had the least exposure to the province, with only 16.8% of Chinese imports originating there, or 12.1% of all U.S. imports. 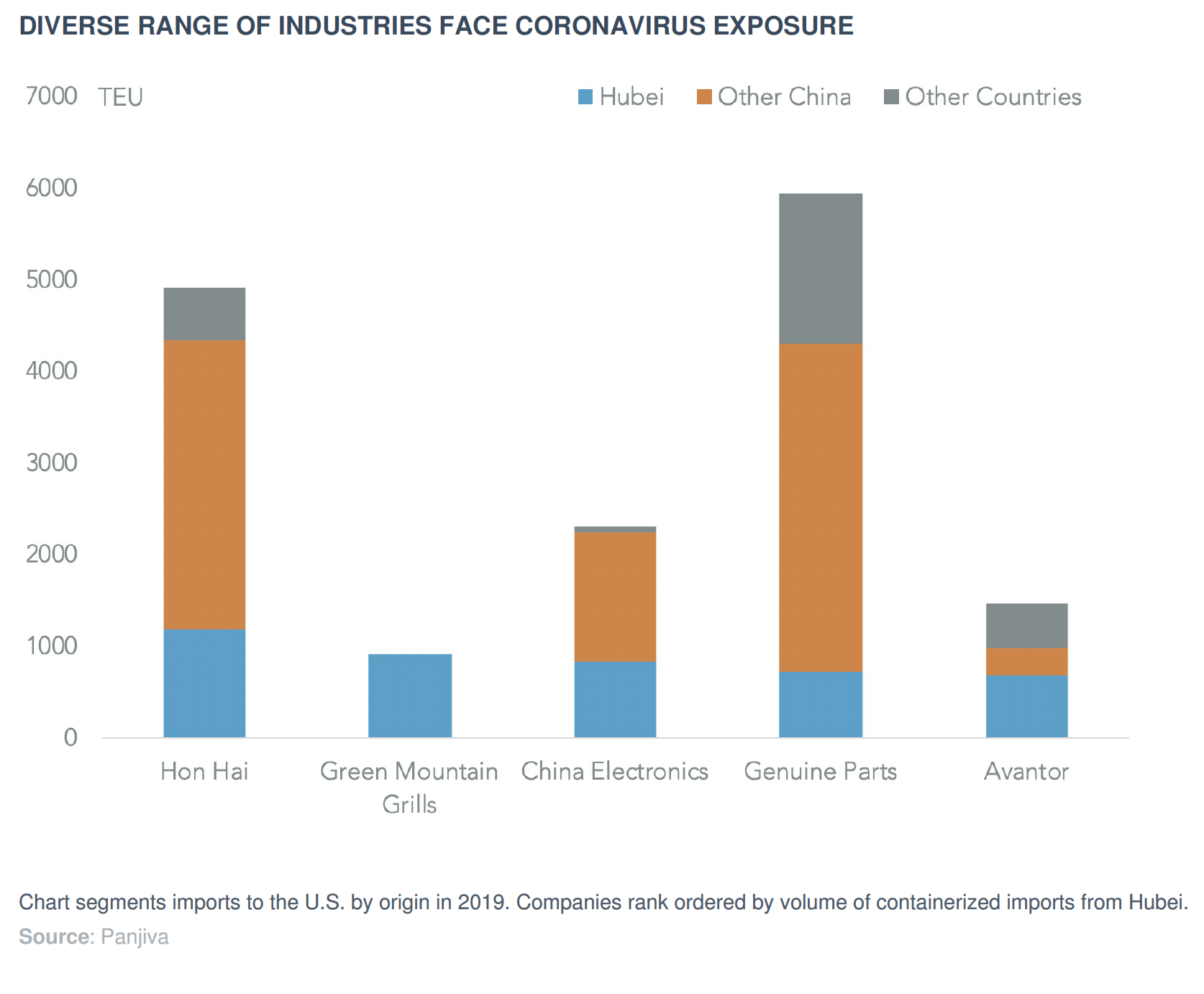