Copper Margins To Rebound In 2020 Amid Recovering Prices


Copper Margins To Rebound In 2020 Amid Recovering Prices

In 2018, copper all-in sustaining costs, or AISC, increased for the second consecutive year to US$1.92 per pound, up 2.1% year over year on the back of growth in electricity costs and sustaining capital spending, or capex. In 2019, we expect AISC to rise by 1.2% year over year to average US$1.94 per pound, largely as a result of rising minesite costs. This will be followed in 2020 by a 1.5% decline, driven by lower treatment and refining charges. We therefore estimate margins to decline by 23.2% year over year in 2019, followed by a 7.4% recovery in 2020. 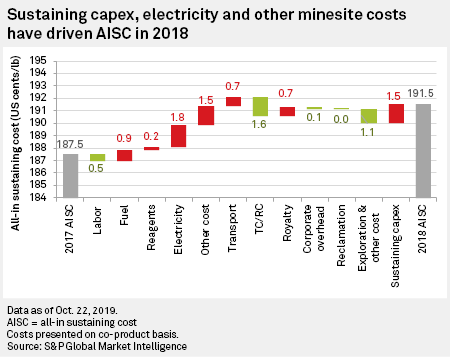 In 2018, sustaining capex grew by 5.3% year over year, in line with higher capital spending among major copper-producing companies. Glencore PLC increased its attributable capex on Antamina by 12% to US$201 million, on Collahuasi by 23% to US$263 million and on its African copper mines by 45% to US$510 million. First Quantum Minerals Ltd. also increased sustaining capex to US$320 million, up 10% from the previous year, with the biggest increase centered on the Sentinel mine, which saw its sustaining capex increase by 26% to US$130 million.

Electricity cost increased by 10.3% year over year to 20 U.S. cents/lb on the back of higher electricity prices in major copper-producing countries. Chile, which produced 28% of global mined copper in 2018, increased its local electricity price by 8.6% year over year in U.S. dollar terms. Chilean power generators have relied on imports of thermal coal to make up for limited hydroelectric supplies in their power market as the country suffers through a long period of drought. 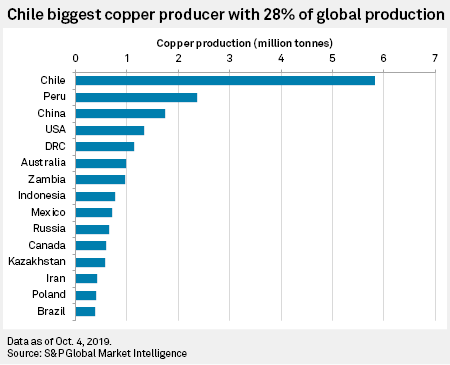 A major factor influencing costs at most mining operations is the local currency rate versus the U.S. dollar. A strengthening local currency against the U.S. dollar translates to higher costs in U.S. dollar terms and vice versa. In 2018, we saw the Chilean and Chinese currencies strengthening by 1.1% and 2.1%, respectively, year over year against the dollar, which pushed up costs at copper mining operations in these countries. 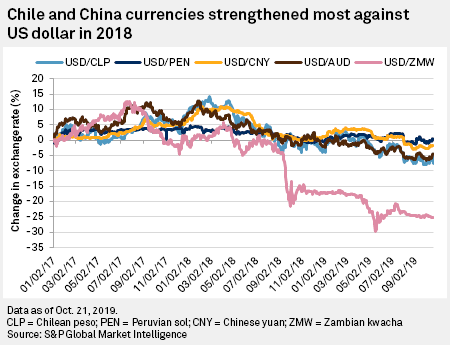 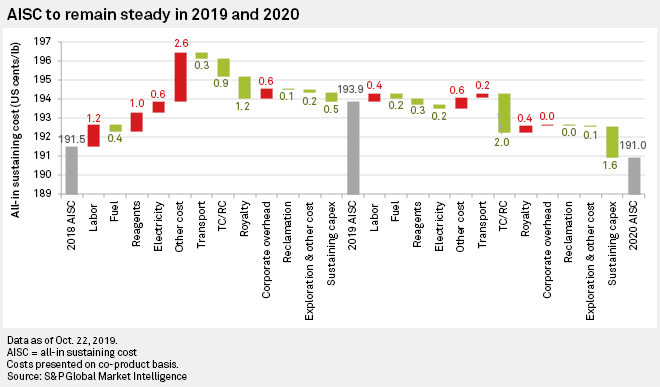 In 2019, U.S dollar strength has led to a 6.7% decline in the average U.S. dollar-to-Chilean peso exchange rate year-to-date, with declines also seen in other major copper-producing countries' currencies. This has driven down some cost components, such as transportation; however, the foreign exchange situation has been counteracted by inflation and other factors, such as droughts in Chile and Zambia, which continue to negatively impact the power supply in these countries, leading to an overall 3.0% rise in electricity costs.

Softening diesel prices to date in 2019 will result in a 6.7% year-over-year drop in fuel costs for the year. Oil prices recovered in 2017 and 2018, rising by 25% and 31%, respectively, year over year, feeding through to diesel prices and leading to higher fuel costs. We have seen a reversal so far in 2019, however, with the Brent oil price retreating by 7% compared with full year 2018.

Royalty costs will decline in 2019 by 11.4% year over year, largely as a result of the lower copper price; however, this will reverse to some extent in 2020, with expected stronger copper prices resulting in a 3.9% increase in royalty costs.

TC/RC, sustaining capex to drive costs down in 2020

We estimate average treatment and refining charges, or TC/RCs, to decline by 4.7% year over year in 2019. In 2020, TC/RCs will be one of the few costs with significant changes, declining by a further 10.8%. This is largely attributable to the expected reduction in copper treatment charges, which are predicted to average at 11.7 U.S. cents per pound and 9.3 U.S. cents per pound, respectively, in 2019 and 2020. This is a result of the copper concentrate market going into deficit from rising Chinese smelter capacity and limited scrap copper availability. This is demonstrated by Jiangxi and Tongling agreeing an annual contract TC/RC for 2020 of US$64/tonne of concentrate, compared with the average 2019 annual contract of US$81/tonne.

Sustaining capex will decline by 1.7% year over year in 2019 compared with 2018. We expect it to fall by a further 5.7% in 2020 as many large copper-producing assets are expected to maintain capital spending discipline to maintain margins at their operations. Of note is Grasberg, where the decline in sustaining capex is attributable to its transition to an underground operation, with most of the capital spending allocated to pit pushbacks no longer applicable. 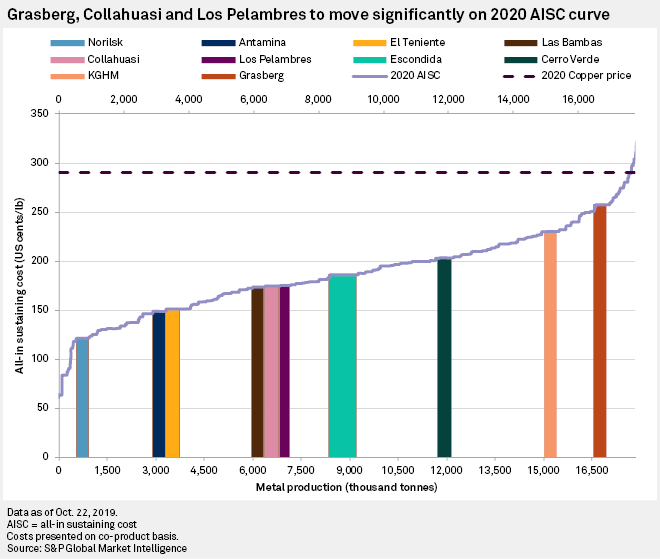 In 2020, we expect 3.7% of copper production to be above the forecast price. Of the top 10 copper-producing assets, Grasberg, Collahuasi and Los Pelambres will move significantly up the cost curve compared with 2019. Grasberg will move up as output declines in 2020 as a result of grade changes and transition to an underground-only mining operation. Anglo American reported that drought conditions are causing lower production from its copper operations in Chile, including Collahuasi and Los Bronces. This, coupled with planned lower grades at Collahuasi, will influence the company's costs. We estimate Los Pelambres to move up the cost curve as a result of lower production and lower grades leading to higher costs. 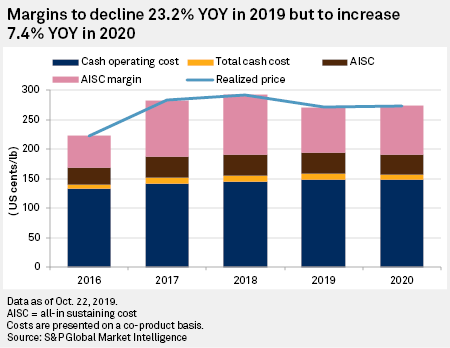 With average AISC rising by 1.2% year over year alongside an 8.6% drop in the average copper price, we will see margins in the copper mining industry shrink by 23.2% in full year 2019. In 2020, copper miners' margins should grow again as lower sustaining capex and TC/RCs lead to a 1.5% decline in AISC, while the copper price is expected to increase by 1.0% year over year, resulting in a 7.4% increase in margins.