August was a busy month for metals prices as market developments continued to drive precious metals upward, nickel surged on the back of Indonesian news flow, both copper and zinc languished, and iron ore corrected on demand concerns. 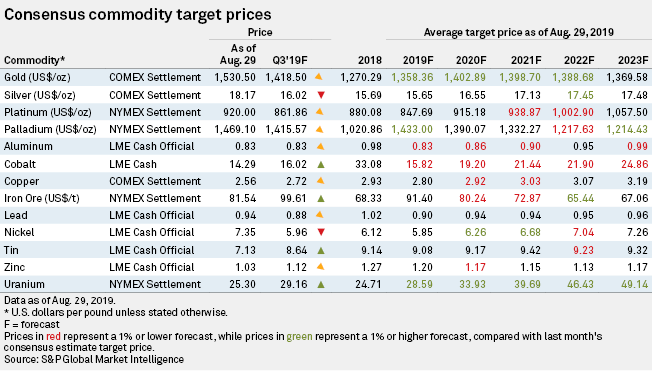 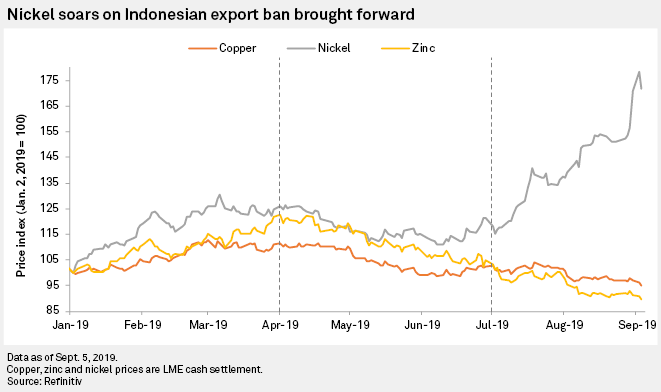 Looking first at nickel, London Metal Exchange cash settlement prices continued to surge for the second consecutive month. Between end-June and end-August, nickel gained more than 40% and at end-August was at its highest since September 2014. In July, nickel stocks fell to a seven-year low, and rumors started surfacing that Tsingshan was buying LME nickel in the market. Into August, and news became more focused on the possibility that Indonesia would bring forward an export ban on nickel ores earlier than previously expected. This was finally announced by the government early in September. Year to end-August, nickel averaged US$12,892/t, yet the consensus target price for 2019 was US$12,903/t (US$5.85/lb), only revised upward by 0.5% — most of the contributors were left behind by the sudden and volatile nature of the price shift.

Gold prices were another strong mover over the month, having gained 7.5%. The CME's Fedwatch tool showed that the market was already pricing in further rate cuts after the Federal Reserve cut its target rate in July, its first cut in a decade. On August 7, gold broke through the US$1,500/oz barrier and continued to climb as the U.S. two- and 10-year Treasury spread turned negative and real bond yields in many jurisdictions globally also fell increasingly negative. Yet gold has failed to test US$1,550/oz meaningfully, and we believe that it could move sideways in the coming weeks. Consensus estimates were revised upward by 1% in 2019 and 2% in 2020-22. Unlike for nickel, where expectations are for prices to rise for successive years, gold consensus targets seemingly indicate falling prices once again in 2021. 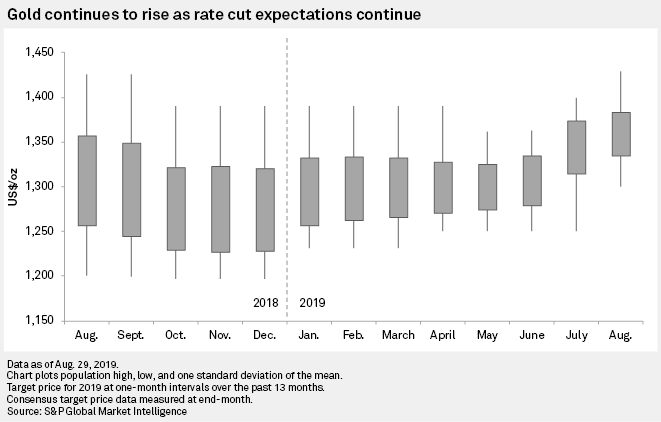 Silver threw off its weighting as an industrial metal to post a strong performance in August, rising by 12.9% to US$18.35/oz by month-end, and has since risen higher. Investment flows spurring a correction in the gold:silver ratio from multi-decade highs have been the primary driver as slowing global growth and fears of a possible U.S. recession should hurt silver's industrial demand prospects. Consensus targets were unchanged for 2019 despite the price action and were only revised up in 2020 by a modest 0.65%.

Consensus targets for iron ore were brought down slightly after 12 consecutive months of upward revisions. The range of estimates also contracted, with the standard deviation of the data set at US$4.84/t versus US$7.94/t one month prior. The minimum target price in the dataset was revised upward, with a low estimate of US$80.65/t. Over the month of August, iron ore prices fell dramatically, falling back through US$100/t on Aug. 5. We assess that news of Vale's progress in restarting some of its suspended operations in its second quarter results at end-July, coupled with faltering demand for iron ore signaled by mill margins turning negative, has led to a slacker market than previously expected. 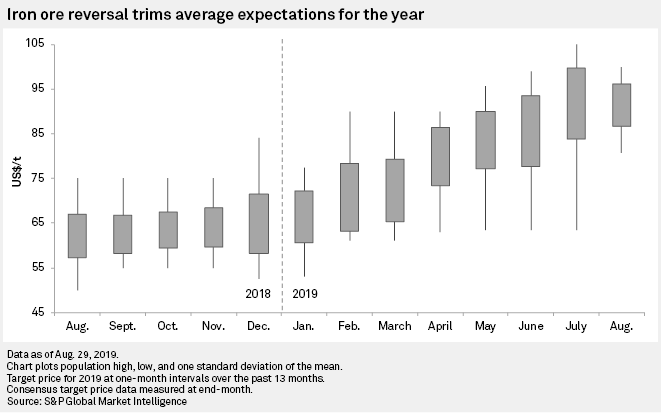 Copper consensus targets were revised lower marginally for each year out to 2023 as the weak performance of copper prices themselves due to the ongoing U.S.-China trade dispute dragged sentiment lower. On Aug. 5, LME cash copper fell to its lowest point since June 15, 2017, as the Chinese renminbi was allowed to breach the 7 yuan level versus the U.S. dollar. At the same time, in early August, zinc also reached new lows, falling to US$2,258/t (US$1.02/lb on Aug. 7) and pushing lower in September as we forecast an increased refined surplus in markets in 2019 amid a worsening demand backdrop. Average zinc target prices fell marginally between 2019 and 2021 versus end-July.