Kagan expects global cloud gaming revenue to grow 26.0% in 2022 to $2.73 billion as the library of compatible software and supported devices gradually grows and the average consumer becomes more aware of the tech's potential. However, these factors only put the segment on course to hold a 2% share of the total gaming software and services market at the end of 2022.

Cloud gaming's modest market share is striking because its moment had seemingly arrived as the pandemic triggered an imbalance of hardware supply against surging demand. Many cloud gaming services were still refining the tech, spinning up server capacity and growing the list of supported devices. Now that the groundwork has been laid, the segment has an opportunity to break through into the mainstream if the platforms can deliver on compelling content. 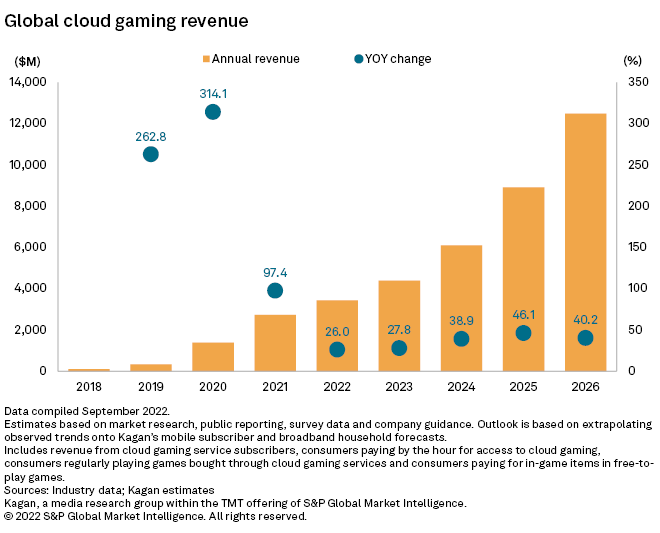 Cloud gaming is on increasingly firmer footing in terms of performance, smart TV partnerships are being forged and the killer apps are on the way as Microsoft Corp. and Tencent Holdings Ltd. make big bets on content running in the cloud. We anticipate these tailwinds will help grow cloud gaming revenue at a 35.6% compound annual growth rate from 2021 to 2026, ending the forecast at $12.49 billion or nearly 7% of the total global gaming content market.

Kagan defines cloud gaming as fully interactive media rendered on remote hardware and delivered to client devices such as phones, laptops, smart TVs and streaming media devices. Cloud gaming allows consumers to play games that are more demanding than most local hardware allows, and it cuts out wait times associated with downloads, installations and software updates.

Our cloud gaming analysis is based on public reporting from key stakeholders, discussions with industry figures and other market research. Our forecast extrapolates our historical estimates across Kagan's broadband household, mobile subscription, and connected device forecasts. This analysis includes only that revenue driven by consumers buying subscriptions, software and add-on content. It does not include middleware, development tools or hardware. 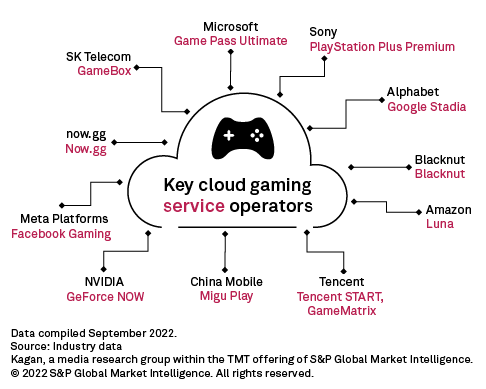 The primary drivers for growth over the course of the forecast are:

* Microsoft. The Xbox platform holder will be compelled to recoup the costs of its recent acquisition spree by amassing the widest addressable audience possible. Microsoft will have big-budget games from Zenimax and potentially from Activision Blizzard Inc. to sell in 2023, and its Game Pass Ultimate cloud gaming service allows it to reach outside of the limited console and high-end PC market.

* Growing datacenter footprints. The expanding datacenter strategies of companies such as Alphabet Inc., Amazon.com Inc., Microsoft and Tencent are making it easier for cloud gaming platforms to reach more users and achieve economies of scale.

* VR and the metaverse. Meta Platforms Inc. is already experimenting with remote rendering for its Quest headsets to reduce the price of the hardware, thus lowering the barrier to entry for would-be VR gamers. Similarly, graphically robust metaverse experiences, in and outside of virtual reality, will likely require assistance from the cloud to reach affordable mass-market hardware.

The primary challenges to cloud gaming include:

* Network inadequacies. Cloud gaming will provide the best experience to consumers with robust in-home networks that are physically close to the datacenter and connected by a fiber-rich backbone. Others may have playable, if less than ideal, experiences while some will be plagued by low image quality and high latency. Widespread 5G and fiber rollouts could bridge the quality gap over the long term.

* Entrenched legacy interests. Apple Inc., Nintendo Co. Ltd. and Sony Group Corp. hold massive influence and market share over the gaming industry but do not currently have substantial interest in the success of cloud gaming. We expect that these companies will do what they can in the years ahead to keep gamers engaged with content running on local hardware.

* Vacillating corporate commitment. Any new platform needs to be actively nurtured by publishers and platform holders to succeed. Alphabet's Stadia serves as a cautionary tale in this respect. The tech giant ceased its cloud gaming software development efforts, and the service suffers from spotty third-party support. We estimate that Stadia peaked at 2.6 million subscribers in 2021. Alphabet announced that it will wind down the service in early 2023. We expect the company to monetize the underlying tech through licensing agreements, such as its deal with AT&T Inc. to provide a Batman game to its wireless customers. 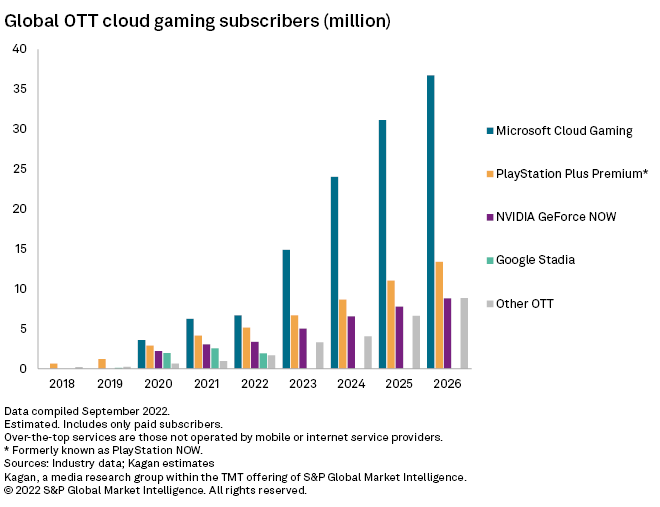 We expect Microsoft to be the largest over-the-top cloud gaming service by subscribers over the forecast due to its focus on Game Pass while Sony hedges its console-focused strategy with its PlayStation Plus Premium streaming option. We anticipate that NVIDIA Corp.'s GeForce NOW service will have limited upside without its own proprietary content to highlight, but its high-end tech will continue to drive growth among graphics enthusiasts. Note that the chart below does not include services offered by broadband or wireless network operators.

We estimate that North America accounted for the largest share of global cloud gaming revenue at 32% of the market as of year-end 2021, followed by Western Europe at 26% and Asia-Pacific at 23%. We expect that Asia-Pacific will grow its share of the market in 2022 as cloud services such as Migu Play and Tencent Start pick up steam while North American- and Western Europe-focused services such as Game Pass and Stadia suffer from a lack of new software. 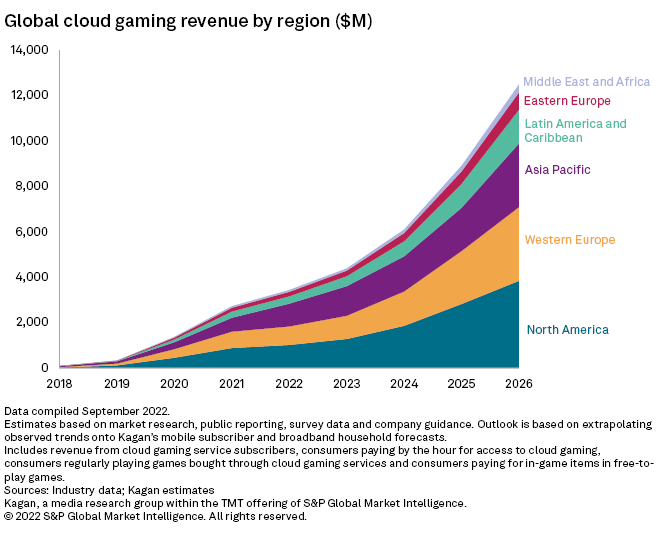 However, North America and Western Europe will have an opportunity to claw back market share starting in 2024 as the renewed software push for Game Pass takes hold.

We also expect Latin America to grow at a steady rate. The market has the potential to adopt cloud gaming services as a replacement for its relatively robust console installed base. However, the limited broadband infrastructure in many Latin American nations holds its potential upside in check.