This is the first in a series of articles covering the results of S&P Global Market Intelligence's annual Mobile Banking Survey.

Banking customers' shift toward digital channels during the pandemic is likely here to stay.

A significant portion of retail banking consumers continue to visit branches less often and use their mobile apps more frequently nearly one year after the COVID-19 pandemic began, and many anticipate continuing their new behaviors well after the pandemic ends.

Nearly 52% of respondents to S&P Global Market Intelligence's annual consumer mobile banking survey, conducted in February and March of 2021, indicated that they were visiting branches less frequently since the pandemic began. Among those respondents, more than 65% were also using their mobile apps more frequently during the same time frame.

The trend of consumers shifting activities out of branches and towards mobile channels appears relatively stable over the course of the past year. According to our 2020 mobile banking survey, conducted in June and July of 2020, approximately 58% of respondents indicated they were visiting branches less frequently due to the pandemic; among them, over 61% indicated they were also using mobile apps more frequently.

And the new behavior appears sticky; nearly 88% of respondents who were using their mobile apps more frequently anticipate continuing or increasing current usage levels once the pandemic officially ends. Utility features like photo check deposit and money transfers, which were discovered by a significant portion of consumers after the pandemic, may be contributing to the stickiness of these new patterns. 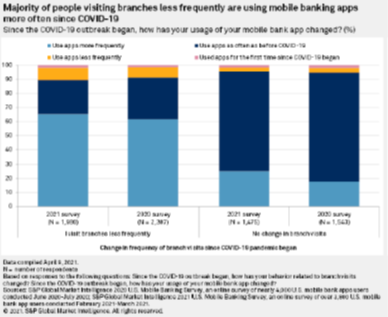 Banks of all sizes are feeling the effects of changing consumer tendencies. JPMorgan Chase & Co. announced in its first-quarter earnings call that active mobile user count grew by 9% to 42 million while branch transactions remained suppressed. Michigan City-based Horizon Bancorp Inc. saw monthly digital transactions climb to 74% of all transactions by the end of the first quarter, compared to 57% in 2019.

Younger generations, namely Gen Z, Millennials, and Gen X, were more likely to reduce branch frequency than older generations by a slight margin. The discrepancy between generations was larger with respect to increased mobile app usage. The proportion of younger consumers using their mobile apps more frequently was above 50% while the percentage of Baby Boomers and seniors leaning more heavily on mobile apps during the pandemic hovered closer to 40%. Older generations demonstrated a higher propensity to maintain their old behavior patterns despite the pandemic. Still, this data suggests that the trend towards digital appears strongly across age demographics. 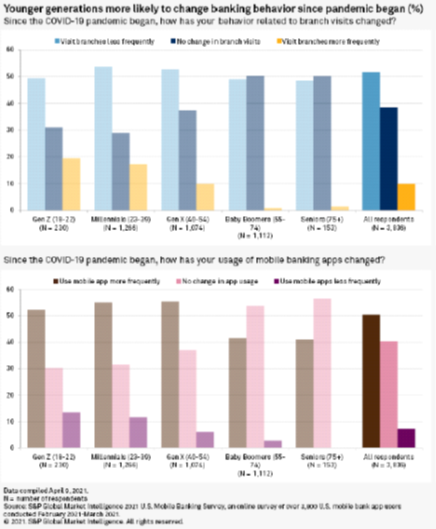 Banks are already responding to the overall shift towards digital. Aside from making continued investments in

augmenting their digital capacities, banks made significant cuts to their branch footprints in 2020. Net branch closures in 2020 hit its highest level since at least 2012, as banks sought to boost operational efficiencies in an environment where net interest income remains under pressure due to low interest rates, explosive deposit growth and lackluster loan growth.

As more consumer behavior shifts to digital channels, the relative value of maintaining a dense branch footprint has decreased. However, consumer demand for branch services has not disappeared. Many customers were still using branches during the pandemic. About 36% of survey respondents indicated that they had visited a bank branch in the prior 30 days. Most of these respondents visited multiple times. 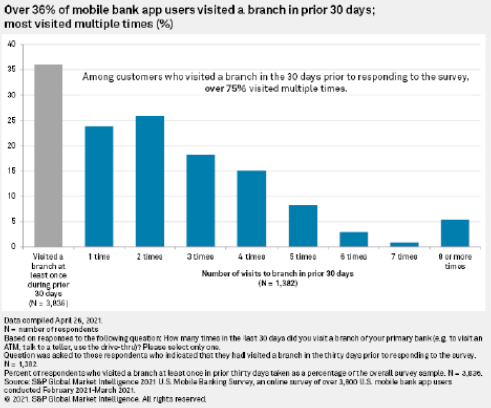 The primary services they sought at branches were related to depositing and withdrawing cash and checks. Nearly 54% withdrew or deposited cash during their most recent branch visit, 40% deposited a check, and 26% cashed a check. Approximately 50% used an ATM.

While mobile apps may not be able to easily service certain cash-based needs, most mobile apps are equipped with check deposit functionality. Approximately 24% of survey respondents indicated that they had used photo check deposit for the first time since the pandemic began, more than any other feature. Other features that were recently discovered by over 20% of survey respondents include utilities like account-to-account money transfer, bill payment, and peer-topeer payments. These features also tend to be highly valued by customers in general.

Though users discovered several new features in the past year, most customers had used their bank's mobile app in one way or another prior to the start of the pandemic. The percentage of respondents who used a mobile app for the first time in the past year was small, less than 2%. Unlike other consumer fintech apps which saw dramatic increases in new account openings in 2020, mobile banking apps appear to have experienced a shift in the role they play in users' lives. Many retail banking consumers who may have previously used their mobile apps rarely and sporadically, now appear to be leaning on them as a regular channel for accessing important banking needs. As the pandemic persists, these customers appear to be getting more comfortable with this new relationship.

Click here to read the full 2021 US Bank Market Report

Results have a margin of error of +/- 1.6 ppts. at the 95% confidence level. Survey results presented for the entire U.S. are weighted by age and census region population to be nationally representative.

Pandemic pushes customers out of branches, banks ramp up closures