Feb. 07 2019 — The ongoing shift toward fiber-to-the-premises-based fixed broadband technology by major ISPs across the Asia-Pacific region has remarkably improved broadband speed in both advanced and emerging markets. In our study of 14 markets, our estimate indicates that 49.3% of all fixed-broadband households in the region had a connection with download speed at 100 Mbps or greater, translating to 248 million as of first half of 2018. China alone accounted for 188 million of these ultra-fast connections, followed by Japan's 35.8 million and South Korea's 17.4 million. These countries are also the top three broadband markets in the region by overall subscriber base. 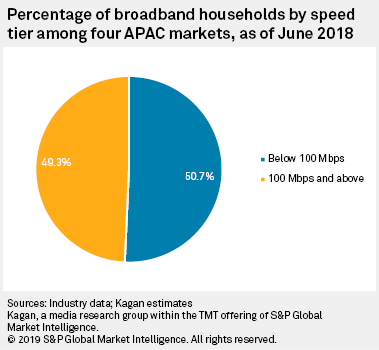 In nearly all markets, FTTP broadband households have rapidly become more prominent over the past 10 years, thanks to a number of national broadband initiatives that have honored strategic importance to fiber technologies. As of 2018, our models indicate FTTP had become the leading broadband platform in nine markets — Australia, China, Hong Kong, Japan, Malaysia, Singapore, South Korea, Taiwan and Vietnam. 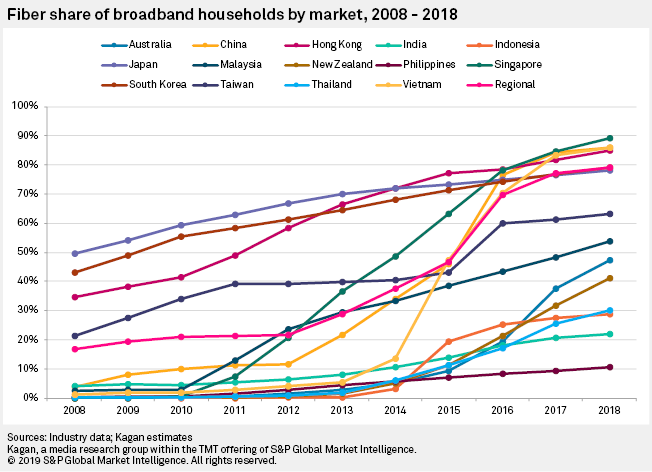 A significant gap, however, still exists between markets in terms of the percentage of broadband speed at or greater than 100 Mbps. Singapore leads the regional charge with 92.6% as of June 2018, despite the city-state being the smallest market among all surveyed countries. South Korea and Japan follow suit with 90.9% and 90.0%, respectively, while Hong Kong comes fourth at 82.6%. On the flip side, the remaining Southeast Asian markets, as well as India, each had less than 5% of broadband households connected to 100 Mbps or above services, with India at the bottom of the comparison with just 0.6%. 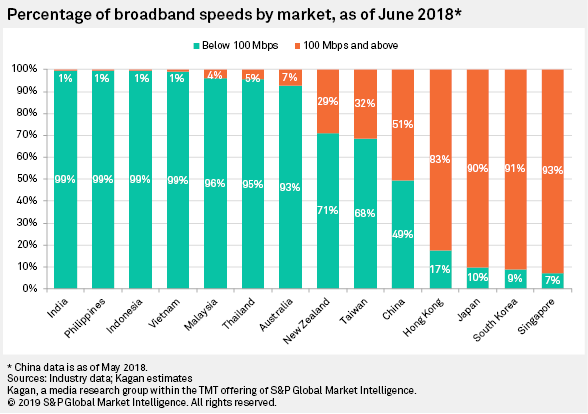 A correlation exists between the adoption and affordability of 100 Mbps or above broadband service — markets with more affordable broadband services generally have higher customer uptake. Our affordability metric is measured by the minimum annual cost of a subscription to 100 Mbps residential broadband in a particular country as a percentage of that country's per capita gross national income based on purchasing power parity, or GNI PPP. During 2018, our analysis indicates that Hong Kong and Singapore had the most affordable services with an affordability of 0.3% each, while Indonesia's services were the most expensive as affordability stood at 11.4%. 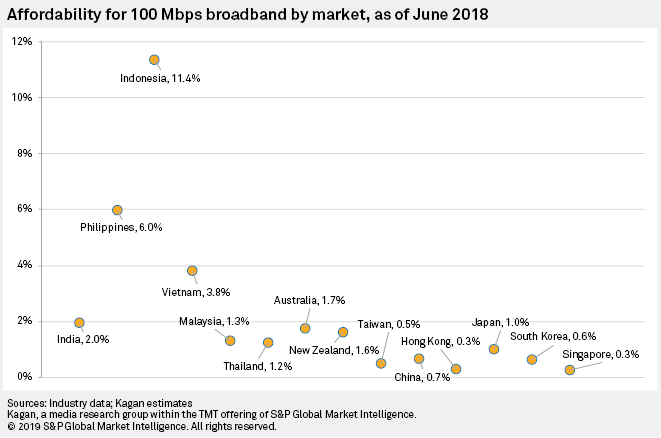 Global Multichannel is a service of Kagan, a group within S&P Global Market Intelligence's TMT offering. Clients may access the full article, with detailed breakdown of speed tiers per country as of Q2 2018 by clicking here.