One of the most crucial and often overlooked segments of the clean energy transition is the upgrade and expansion of the electric transmission system across the U.S. Curtailment rates and grid congestion costs have risen for many independent system operators, or ISOs, as renewable penetration has continued to increase. The recently signed Inflation Reduction Act, or IRA, is expected to provide an additional jolt to already swelling pipelines for wind and solar, making the need for grid expansion and modernization all the more urgent. S&P Global Commodity Insights data currently tracks over 21,000 miles of proposed transmission infrastructure additions or upgrades across 350 projects to help integrate the nearly 320,000 MW of wind and solar capacity now in planning stages.

* Dramatic growth in curtailment rates and congestion costs from 2019-2021 indicate a high degree of transmission constraint in the grid, a situation that will only worsen given the current pipeline of renewable generation projects and new government policies promoting further development.

In 2021, the Biden administration set an ambitious goal of achieving a zero-carbon electricity grid by 2035 and pushed to implement a national clean energy standard of 80% by 2030 to help reach this goal. While that legislation eventually failed, the passage of the IRA in August extended production and investment tax credits for wind and solar through 2030, boosting confidence that currently planned projects can reach the commissioning stage and increasing already-high developer interest in wind and solar through the next decade.

Even without a binding national clean energy standard, wind and solar development is expected to continue at a blistering pace over the next decade thanks to state-level targets and existing long-term federal support. Analysis from the National Renewable Energy Laboratory and Princeton University concluded that high renewable penetration of this magnitude would require the capacity of the transmission system across the country to increase by two to three times by 2030.

Curtailment rates and congestion costs are already increasing for many ISOs, and the burgeoning pipeline for wind and solar will only add to these stresses. Regardless of long-term clean energy goals, upgrades and expansion of the electric transmission network are desperately needed. With uncertainty about federal support seemingly eliminated for the time being, transmission and distribution constraints remain one of the most crucial hurdles for renewable generation integration.

Congestion costs provide an additional metric of transmission constraints. If transmission capacity is insufficient to deliver lower-cost generation to population centers, utilities must tap higher-cost capacity closer to these consumers. The result is higher electricity prices for utility customers.

Congestion costs totaled across every ISO have more than doubled from 2019 to 2021, jumping from $2.7 billion to $7.2 billion. Wind and solar farms take up three to five times as much land as coal and natural gas plants on a per MW basis, requiring projects to be built in sparsely populated areas with low-cost land, far from dense population centers. An expanded and upgraded transmission network is required for maximum grid efficiency and reduced energy costs in transferring this power from rural areas to major cities.

The growing problem of transmission constraints is well known in the energy industry. Recent legislation has also addressed the issue with dedicated funds to upgrade the increasingly insufficient energy grid. Signed into law in November 2021, the Infrastructure Investment and Jobs Act, or IIJA, allocated $1.2 trillion for infrastructure upgrades across multiple industries. In 2022, the U.S. Department of Energy launched the "Building a Better Grid" initiative, which will use $12.5 billion from the IIJA for grid reliability improvements.

The IRA set aside $5 billion for direct loans for the construction, modification or repowering of generation and transmission facilities. An additional $760 million was allocated for siting, permitting and regulatory status determinations of high-voltage interstate electricity transmission lines proposed for construction.

The IRA and funds from the IIJA will benefit most energy industry companies, but vertically integrated utilities which own both transmission and energy generation facilities could see an outsized advantage based on their ability to capitalize on infrastructure funds and federal tax credits. Notable companies with aggressive plans for both transmission spending and renewable development include American Electric Power Co. Inc., or AEP, Berkshire Hathaway Inc., Canada Pension Plan Investment Board, Dominion Energy Inc., Duke Energy Corp., National Grid PLC, NextEra Energy Inc. and Xcel Energy Inc. 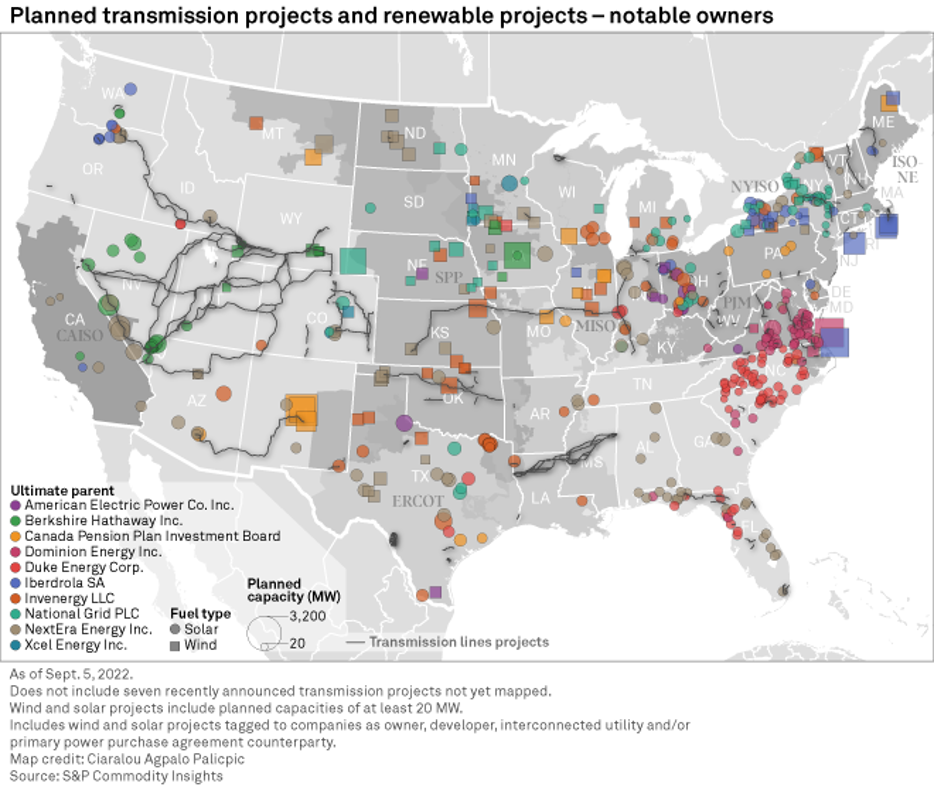 NextEra Energy leads all companies with over 21,000 MW of wind and solar in planning. Additionally, the company has 891 miles of transmission lines in development to help integrate its growing renewable portfolio. NextEra is projected to spend just over $6 billion on transmission through 2025.

Perhaps the most noteworthy transmission project in NextEra's portfolio is the Oklahoma/Arkansas portion of the Plains and Eastern Clean Line high-voltage direct-current, or HVDC, project. The project has had a tumultuous history, with the Tennessee Valley Authority backing away from the project in 2017 and the Energy Department terminating its participation in 2018. NextEra acquired Plains and Eastern Clean Line Oklahoma LLC in late 2017. Connecting Oklahoma and the state's formidable wind generation to Tennessee, the line would help alleviate growing wind curtailment in SPP while delivering potentially low-cost wind energy to the Southeast region. The project's status is up in the air.

HVDC transmission lines such as the Plains and Eastern Clean Line could emerge as a crucial piece of the clean energy transition. Although typically more costly than their AC counterparts, HVDC lines can carry more capacity across long distances while mitigating electricity losses, allowing for the transfer of wind and solar power from sparsely populated regions to urban metropolises hundreds of miles away. The Plains and Eastern Clean Line would run 720 miles and carry more than 4,000 MW of energy.

Berkshire Hathaway and its subsidiaries own over 35,000 MW of wind and solar capacity currently and have another 9,500 MW in planning. The multinational conglomerate also has the largest planned portfolio of transmission projects, with over 2,200 miles of lines planned across 27 projects. The largest is the Energy Gateway Transmission Expansion project developed by subsidiary PacifiCorp. Across 11 different segments, the project is expected to span a total of 1,224 miles, running from the Oregon/Washington border to central Wyoming, and will help distribute the growing wind portfolios in Wyoming and Colorado.

AEP leads all utilities in projected transmission spending, expecting to spend north of $14 billion on transmission projects through 2025. Transmission and distribution spending accounts for over two-thirds of AEP's projected capital expenditures over the next four years. The Ohio-based utility is also involved in over 6,400 MW of renewable capacity, with solar comprising 4,500 MW of this total. Much of the company's transmission portfolio in planning is via 138 kV lines ranging from 5 miles to 50 miles long. Its longest transmission project is the 220-mile, 765 kV Pioneer Transmission project running through Indiana along the Illinois border. 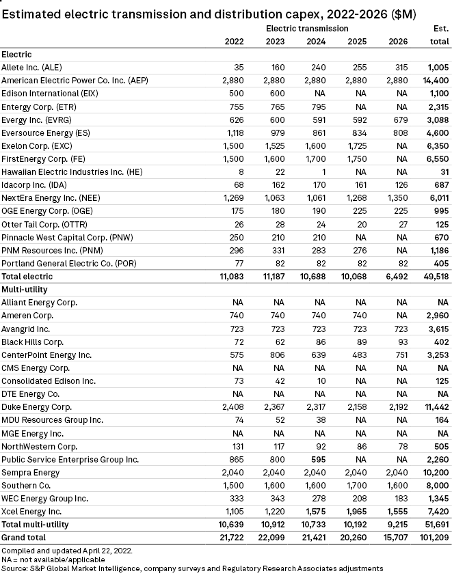 Additionally, a handful of major HVDC transmission projects are in planning, with renewable integration and transmission serving as a major driver for their development. The 550-mile SunZia Southwest Transmission Project being developed by Pattern Energy Group LP would connect Arizona to New Mexico, which has become a hub for renewable energy development. The 780-mile Grain Belt Express transmission line runs from Kansas to Indiana, eventually hooking up with the Pioneer Transmission project. Being developed by Invenergy LLC, the $7 billion project is expected to have a potential capacity of 5,000 MW.

Renewable development in the U.S. is full steam ahead. Despite growing signs of transmission and distribution congestion, wind and solar pipelines continue to grow at an expeditious pace. Wind and solar capacity in planning totals 316,000 MW, according to Commodity Insights data, and interconnection queues of the seven ISOs combine for 1.2 GW of wind and solar. The energy grid in its current state is nowhere near capable of handling even a fraction of this incoming variable generation. This mounting obstacle is starting to get the attention it demands, but more needs be done.

Major transmission projects, particularly those that span multiple states, get caught up in arduous siting and permitting processes. The Grain Belt Express project, for instance, has been in the making for over a decade now. The Federal Energy Regulatory Commission is taking steps to ameliorate these preliminary planning hurdles. Still, without continuous diligent efforts to expedite grid infrastructure upgrades, industry stakeholders will struggle to meet state and federal clean energy goals.

Quantify the value of energy transition