In these increasingly volatile times, when investors are struggling to understand what the ongoing COVID-19 pandemic and the related recessionary pressures will mean for utility cash flow and profitability, alternative ratemaking plans can provide some degree of protection.

Even before the current global crisis, Regulatory Research Associates, a group within S&P Global Market Intelligence, had taken note of an uptick in state regulators' and policymakers' interest in pursuing innovative forms of regulation to address challenges associated with expanding utility capital spending plans, modest to flat sales growth in most parts of the country, regulatory lag and changes in the way the utilities are expected to do business.

Alternative ratemaking plans is a term applied to a wide-ranging complement of mechanisms that are generally outside of the traditional base rate case model. These plans can be broadly or narrowly focused. Broad-based plans like formula based ratemaking, multiyear rate plans and earnings sharing mechanisms streamline the regulatory process, lessen the burden on regulatory commissions, their staff and stakeholders and reduce regulatory lag for utilities. These type of mechanisms may be implemented on a standalone basis or in combination. Many of these arrangements also include an opportunity for earnings enhancement. 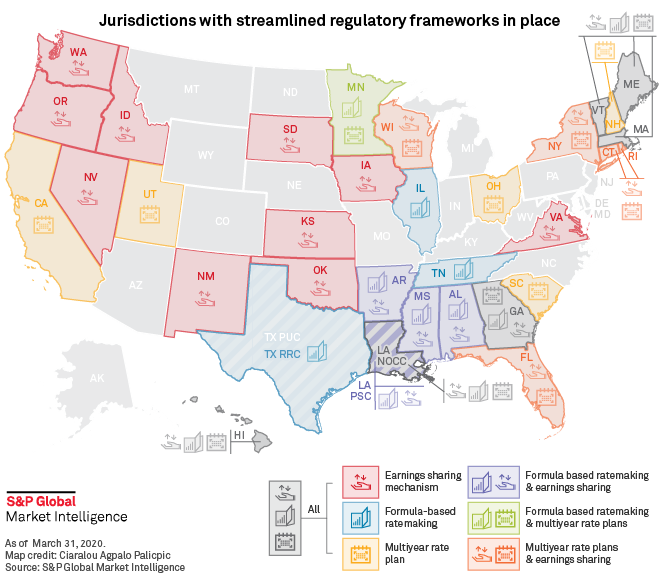 Formula-based ratemaking plans generally refer to frameworks where the commission established a revenue requirement, including a target ROE, capital structure and rate of return for an initial rate base as part of a traditional cost or service base rate proceeding. Once the initial parameters are set, rates may adjust periodically to reflect changes in expenses, revenue and capital investment. These changes generally occur on an annual basis, and there may be limitations on the percentage change that can be implemented in a given year or period of years.

As the name suggests, under multiyear rate plans, the commission approves a succession of rate changes that are designed to take into account anticipated changes in revenues, expenses and rate base. The commission may approve a static authorized ROE or the plan may provide for adjustments to the ROE during the plan’s term. These plans often include true-up mechanisms to ensure that the company makes the investments it has committed to make at the inception of the plan. The plans often include earnings sharing mechanisms and may also include
performance-based ratemaking provisions.

As the name implies, earnings sharing mechanisms provide for the allocation between ratepayers and shareholders of earnings that differ from a target or target range established by the commission. These mechanisms can also be implemented as part of formula rate plans and multiyear rate plans, in conjunction with a rate freeze, as part of a merger related filing, or on a stand-alone basis as part of a rate case.

In a handful of other jurisdictions, legislation or commission rules permit these types of plans, but the commission has yet to approve a specific plan for one of the utilities.

Narrowly focused plans generally target a specific type of behavior or investment on the part of a utility. For example, some may allow a company to retain a portion of cost savings relative to a base level of some expense type, such as fuel, purchased power or pension costs.

Others might permit a company to retain for shareholders a portion of off-system sales or capacity release revenues. Still others provide a company an enhanced equity return, or ROE, for achieving operational performance targets, customer service metrics, reliability standards, demand reduction targets under energy conservation programs or for meeting or exceeding renewable portfolio standards.

In some instances, commissions have approved ROE premiums for specific types of plant investment when there was a preference for in-state generation versus wholesale power purchases, or in order to incent the deployment of renewable resource facilities.

Regulatory lag refers to the time it takes for an investment or cost change to be reflected in rates after that change has occurred. This lag is an inherent part of the rate case process and comes in different forms. First, is the sheer amount of time it takes for a rate case to be completed. In addition, there are the issues of whether the test year is historical, whether the commission employs an average or test-year-end rate base and/or to what extent adjustments to test year data are permitted. 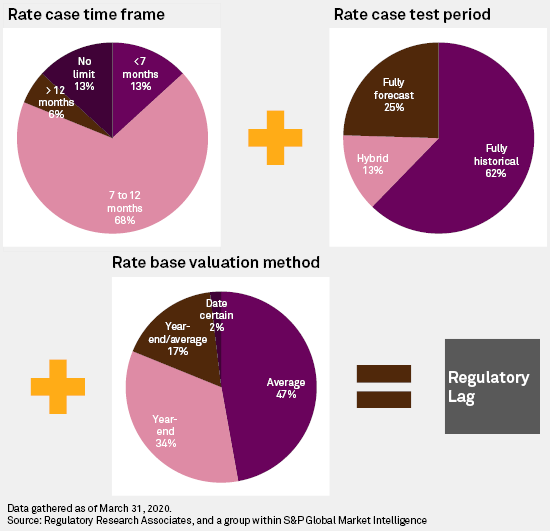 While the above-discussed mechanisms are generally what comes to mind when the phrase "alternative ratemaking" is used, adjustment clauses, also known as limited issue riders, are another approach to reducing regulatory lag, and using a broad definition could be considered alternative ratemaking.

Adjustment clauses were first introduced in the 1970s to mitigate volatile fuel costs that were threatening company earnings and cash flows. In the ensuing years, the use of these mechanisms expanded to include other expenses that were outside of a company’s control or were mandated by government regulation.

More recently, they have become increasingly prevalent to address capital investment, be it gas main replacement, electric grid modernization or in some cases new generation — particularly when a state wanted to foster construction of a particular type of generation or the deployment of new technologies.

Like the broader-based alternative regulation plans discussed earlier, these mechanisms tend to reduce regulatory lag, but only as it pertains to the assets, asset classes, or expenses that are permitted to be recovered through these mechanisms. It is also noteworthy that the presence of a broad-based alternative ratemaking plan does not preclude the use of stand-alone adjustment mechanisms for certain items.

Another class of adjustment clauses, revenue decoupling mechanisms, allow utilities to adjust rates between rate cases to reflect fluctuations in revenues versus the level approved in the most recent base rate case that are caused by a variety of factors. 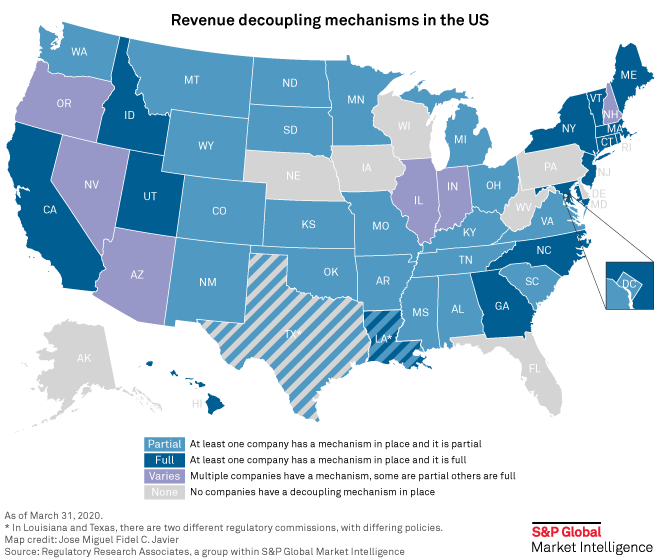 Some of these factors, such as weather are beyond a utility's control and the mechanism can work both ways — in other words it can allow the company to raise rates to recoup revenue losses associated with weather trends that reduce customer usage and can also require the company to reduce rates when weather trends cause usage to be higher than normal.

As clean energy policies have gained momentum, driving ever-expanding energy efficiency initiatives, decoupling mechanisms have been implemented to reduce the disincentive for utilities in pursuing energy conservation programs by making the utilities whole for reductions in sales volumes and revenues associated with customer participation in these programs.

Some of these mechanisms also allow the utility to adjust rates to reflect fluctuations in customer usage that are brought about by broader economic issues, such as demographic shifts, the migration of large commercial/industrial customers to other service areas, the shutdown of such businesses due to changes in their respective industries, recessions and theoretically, crises such as the current COVID-19 pandemic.

Because of their ability to reduce regulatory lag and offer earnings enhancement opportunities, RRA generally views the presence of alternative ratemaking plans as constructive from an investor viewpoint.