Rapidly evolving trade policy is by no means the sole purview of the Trump administration, with significant upheaval coming to Europe via Brexit, in Latin America via Mercosur, across Asia and globally with WTO reform. This report, along with the accompanying report focused on U.S. trade policy, provides a guide for what to expect in the remainder of 2019.

Brexit – And now for something completely the same, more negotiations

The policy seen is evolving on a daily basis, but the current position is that if a new Withdrawal Agreement for the U.K. to leave the EU is not agreed by October 17 then the British government is required – by law – to request an extension to the Brexit deadline to December 31. If it is accepted by all EU members – which is by no means guaranteed – then there’s likely to be a new round of elections in the U.K. followed by further negotiations to reach a final Withdrawal Agreement.

The main sticking point, at least for the administration of Prime Minister Boris Johnson, is the question of a customs border in the island of Ireland. While the current plan is to have a backstop position indefinitely where Northern Ireland remains part of the EU from a customs perspective, which will limit the British government’s ability to sign new trade deals after Brexit.

Both are theoretical constructs at this stage, and the Irish government has already stated that the customs zones are a non-starter. Even ahead of Brexit there has been a decline in Irish exports to the U.K., with a 1.0% slip in 2018 versus 2017, Panjiva’s analysis of Eurostat data shows.

That’s largely been down to weaker pharmaceutical shipments which have slumped by 23.1%, offset only partly by better shipments in agriculture with a 4.9% rise in meat and a 4.3% increase in dairy. There was also an improvement in shipments of capital equipment including electrical equipment which rose 12.0% and machinery up by a more modest 2.2%. The fastest growing sector was energy with a 39.4% rise in refined oil shipments and a 159% surge in electricity supplies – the latter of which shouldn’t be affected directly by customs issues. 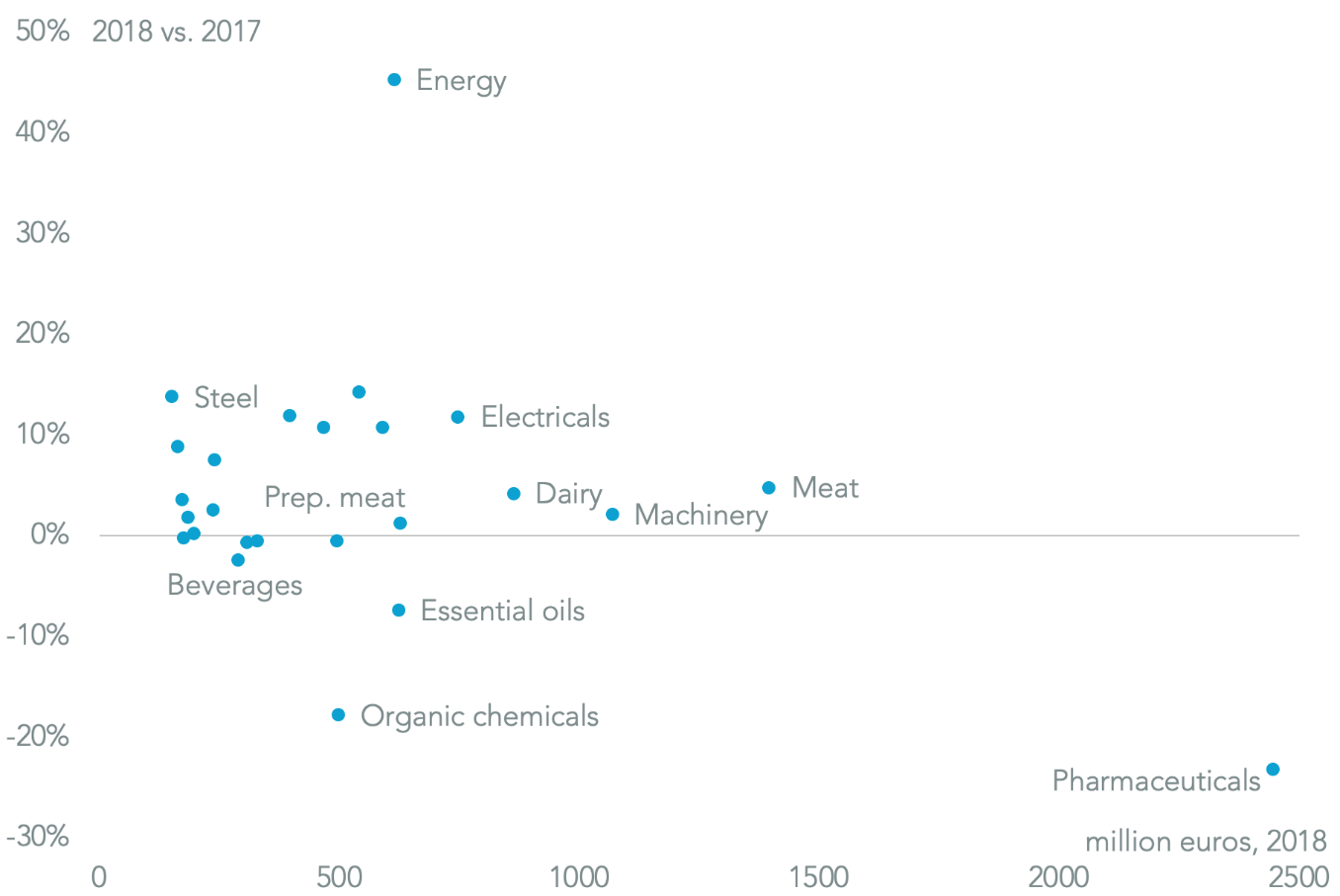 Chart segments Irish exports to the U.K. by product (HS-2) in 2018 and 2017, denominated in euros. Calculations based on Eurostat data. Source: Panjiva

WTO Reform – December 10 will be last orders for new complaints

The World Trade Organization may become ineffective from December10 due to the term of office ending for one of its three remaining dispute settlement panelists. While the panelist has yet to decide whether to remain in office, Inside Trade reports, it’s possible that existing cases may be completed subsequent to that, though new cases are unlikely to be brought.

A solution seems unlikely before the end of the year. The EU’s incoming Trade Commissioner, Phil Hogan, has outlined plans to push for a comprehensive reform of the WTO in late 2020 with a view to completing the process in 2022. The timeframe may be designed to bridge the forthcoming U.S. elections – as flagged in Panjiva’s research of September 27 the Trump administration’s calls for reform have led it to block new appointments to the WTO’s dispute panel.

The EU may want to work more quickly though – should the panel become inquorate it may not be able to enact its own retaliation against U.S. aerospace subsidies – the U.S. will be able to do so by the end of October.

There are 30 remaining WTO dispute cases where a panel has been composed, including 13 against the U.S. which has been the main proponent of widespread WTO reform – and the blocker of new appointments to the dispute panel. Of those 13 cases, seven relate to U.S. section 232 steel and aluminum tariffs. On the other side of the coin, the U.S. has six cases outstanding where it is complaining about the retaliation against its steel and aluminum duties.

TARIFFS WORKING FOR STEEL BUT NOT FOR ALUMINUM 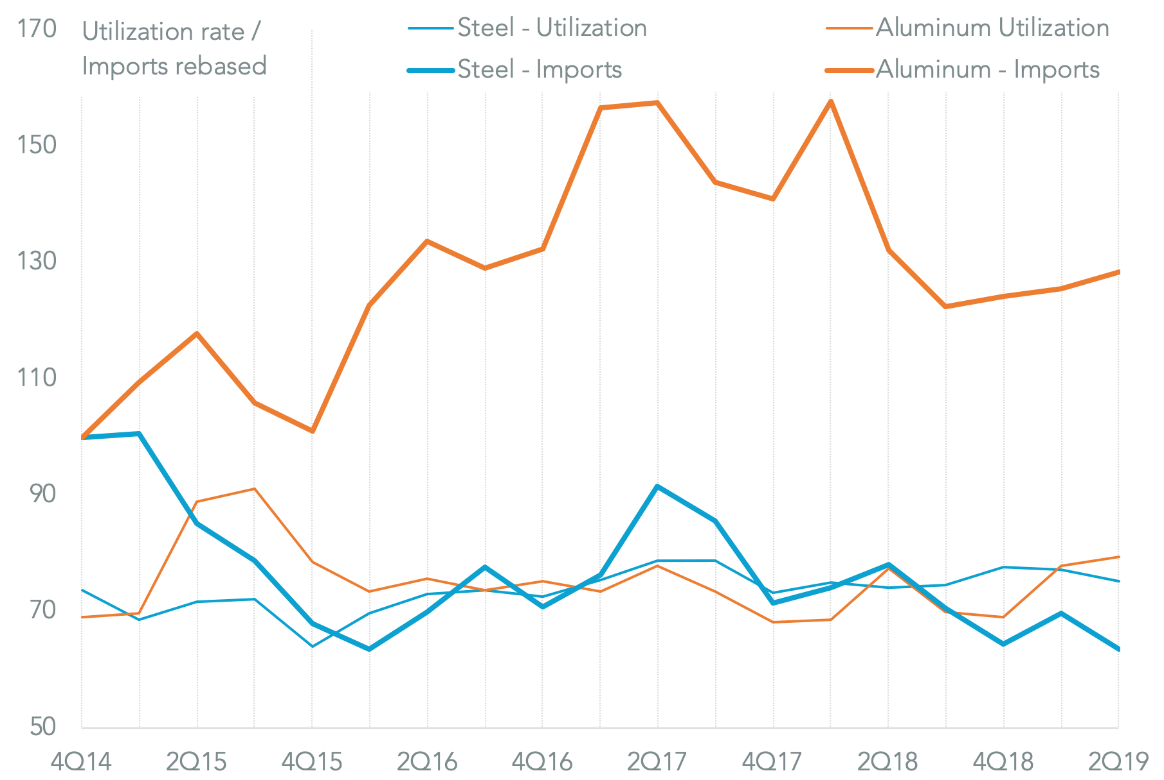 The Brazilian government faces a combination of trade policy challenges and opportunities during the fourth quarter. The deal which has been signed with the European Union and Mercosur is being held up, with Austria among others refusing to sign the deal because of the Bolsonaro administration’s position on deforestation, the BBC reports.

A potential trade deal with the U.S. has been hinted at but not yet initiated. It could – as has been the case with the EU deal – prove to be controversial if focused on agriculture, potentially leading to a more focused deal with the U.S. including the recently increased wheat import quota.

Capital goods have also seen a surge including a 134.9% jump in shipments of transmission systems for the automotive industry. There are still areas of decline of course, including those relating to textile materials, such as synthetic yarns and fabrics which have declined by 5.5%. 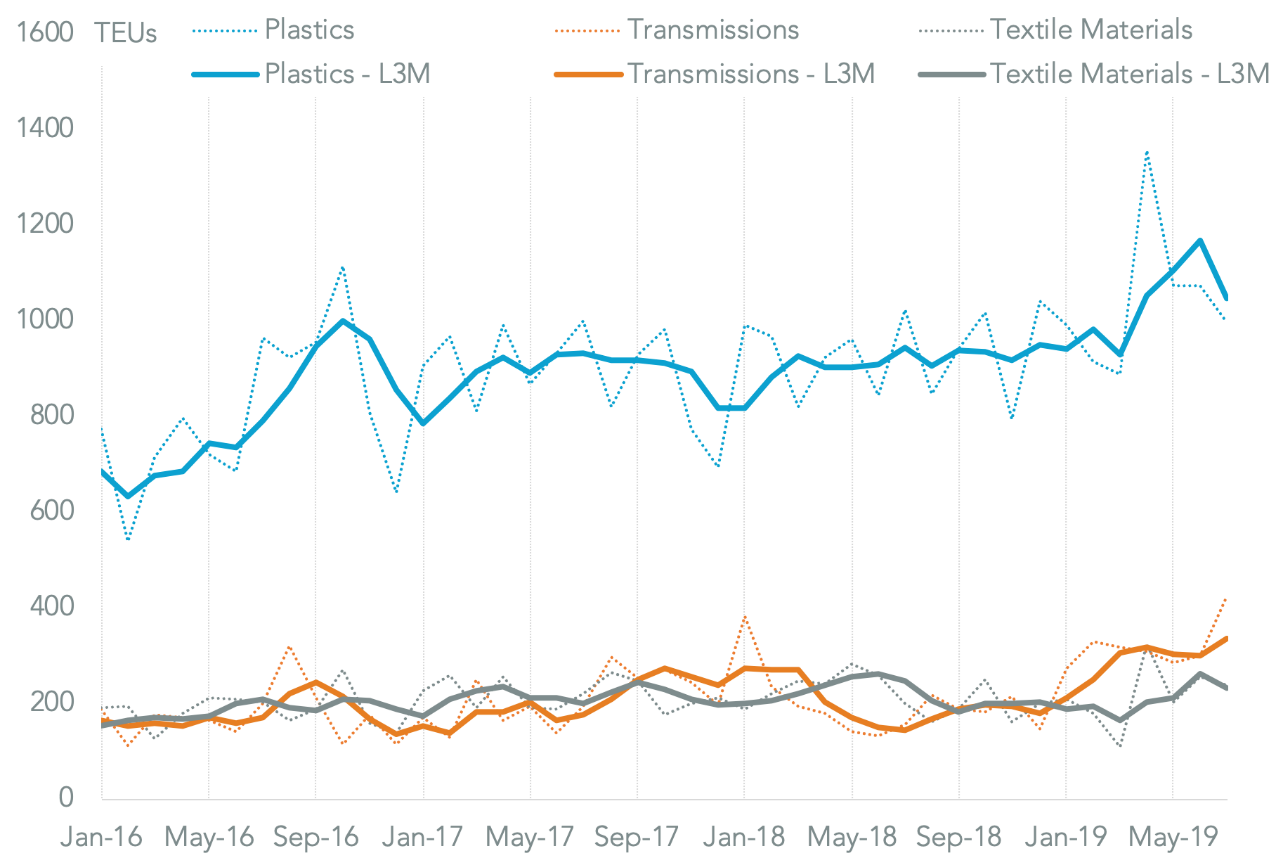 The biggest opportunity in terms of new trade deals at this stage could be the Regional Comprehensive Economic Partnership, which the ASEAN group still wants to deliver in 2019. That seems highly unlikely due to a swathe of geopolitical issues in the region.

Not least of those is the ongoing skirmish between Japan and South Korea where the two countries have cut each other’s trusted trader status. That’s yet to have a meaningful impact on trade between the two countries – which has been in decline anyway due to regional economic weakness.

The Korean peninsula will also continue to be in focus as the U.S. and North Korea seek to address denuclearization, though China remains central to that debate. U.S. leverage over South Korea is somewhat limited given the KORUS trade deal is already signed an active, though new arms sales seem likely.
More serious geopolitical issues are already interrupting trade flows. India and Pakistan remain at loggerheads regarding the Kashmir, and India has had significant tariff barriers in place since the start of 2019. Little seems likely to change there.

Middle East tensions – exemplified by the recent attack on Saudi oil facilities – look set to continue with both regional and global effects. They could also provide a curve ball for the shipping industry – the physical glue that holds global trade together – as it looks to navigate new fuel rules from the start of 2020.

All this uncertainty comes around 17 months into a global slowdown in export growth that headed into a reversal with contracting global export activity since February. Panjiva’s analysis of S&P Global Market Intelligence data shows there was a 2.2% year over year drop in exports from 37 countries plus the EU in the three months to July 31.

There’s likely been more of the same with 14 out of the 22 countries that have reported August data showing a decline with an average fall of 2.3%.

It’s worth noting though that the current downturn is nowhere as severe as the Europe-led downturn of 2015, never mind the more widespread full economic recessions of 2009 and 2002 – yet.

TIMES ARE TOUGH, BUT NOT AS TOUGH AS THEY HAVE BEEN 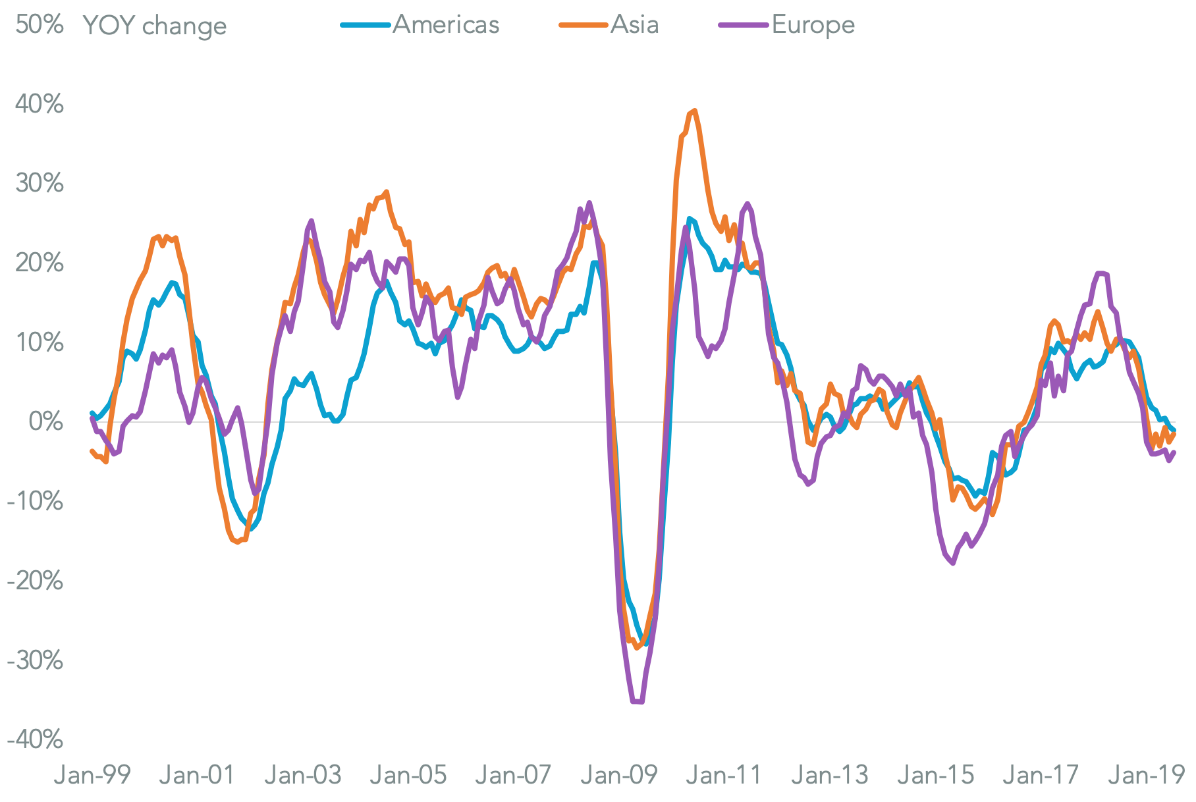