Dealmakers overwhelmingly expect the tech M&A market to build off its record run in 2020. Respondents to the Tech M&A Leaders' Survey delivered their most optimistic forecast in almost seven years, with two-thirds of them anticipating an increase in acquisitions. And there was hardly a naysayer to be found – only 6% said activity would decrease.

That's the largest spread between bulls and bears since the April 2014 run of the survey, when 72% predicted a rise and only 4% voted for a decline. And tech M&A activity did indeed follow that forecast. According to 451 Research's M&A KnowledgeBase, spending rose 59% to $393bn in 2014, the first year the tech M&A market regained its prerecession levels.

Unlike that previous reading, which came at the start of a recovery in M&A spending, the current survey ran in December as tech M&A spending was set to cross $600bn for the first time since the dot-com bubble. The recent outlook is all the more remarkable considering the rebound in sentiment. Respondents to a separate survey in the spring – 451 Research's Flash Survey: Technology Investment Banking Outlook – handed in the inverse forecast, with 63% saying their deal pipelines were down from a year earlier. (That earlier outreach only surveyed investment bankers, while the Tech M&A Leaders' Survey includes bankers, executives and others involved in tech M&A.) 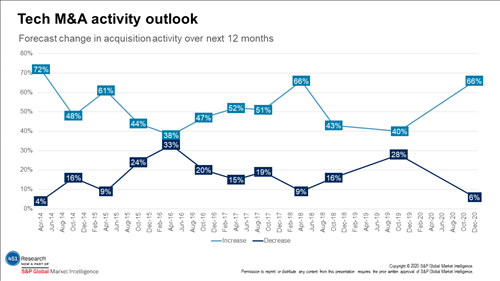 The outlook for valuations, however, isn't quite as bullish as the prediction for overall deal activity. More than one in three (35%) anticipate an increase in valuations for sales of privately held tech vendors in the next 12 months. That's a more optimistic reading than our previous survey in late 2019, when respondents were five times as likely to expect falling valuations. It's worth noting that the pessimistic reading missed the mark. According to the M&A KnowledgeBase, the median multiple in the sale of a private tech provider finished 2019 at a record 3x trailing revenue. In 2020, however, the median multiple (2.3x), despite the record spending, finished at its lowest level since 2016.

A Slight Turn Upward for Valuations 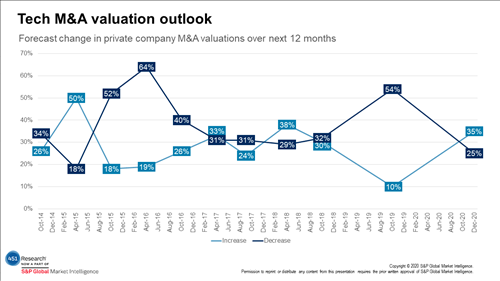 Changing processes in the pandemic

The crush of the global lockdown propelled security to the top of the list of buyers' strategic priorities as a sudden shift to remote work made businesses vulnerable. More than eight in 10 (85%) reported that information security became more important to acquirers' strategic goals over the past 12 months. That displaced the last survey's top result – machine learning, which 80% still said had become more important. Cloud computing also gained a few points, with 79% saying it became more important, compared with 71% in the year-ago survey.

The pandemic's impact has, of course, done more than change buyers' tech priorities: It has altered how deals come together. A delay in due diligence was the most common COVID-induced obstacle our respondents experienced, with 53% saying it occurred in a transaction they worked on as a result of the outbreak. That was followed by a buyer postponing negotiation (39%). And a notable, although smaller, number of respondents related more severe challenges to closing deals, including acquirers renegotiating an agreed-upon price (26%), buyers delaying a bid in anticipation of a target becoming distressed (22%), and the termination of a purchase agreement (9%).

Negotiating Through a Pandemic 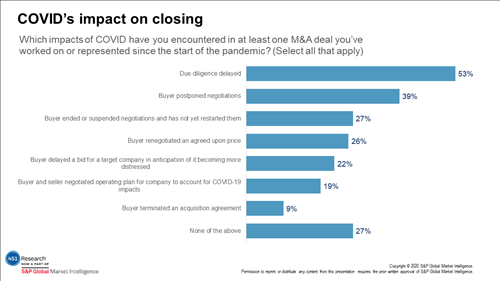 Bankers, CEOs and investors, just like schoolchildren, had to change how they worked during the crisis. Many of those new ways of interacting will likely remain when the virus abates. Almost two-thirds (64%) of dealmakers told us they've seen a signed letter of intent this year without an in-person meeting between the buyer and seller management teams. One-third of them have seen an agreement to acquire put in place without the two management teams ever having physically met. And a full 66% percent anticipate that the post-coronavirus era will include a greater mix of virtual meetings in the negotiating process than before the pandemic struck.

A bounce back for buyouts

Private equity (PE) spending on tech targets ticked up slightly in 2020 to $108bn, bolstered by $27bn in December alone. And like the broader tech M&A market, the Tech M&A Leaders' Survey suggests that activity will rise from there. Respondents overwhelmingly voted for PE spending to move up, with 61% of them expecting an increase – almost double the amount from 2019's survey. Potential drivers of a surge in spending are in place – interest rates remain low and buyout shops hold a record amount of dry powder ($846bn for just North America-focused funds as of December, according to Preqin, a portion of which will be spent on tech).

Although they expect dealmaking to increase, participants in the tech M&A market have a tempered outlook on the valuations that PE firms will pay in 2021. Slightly more than 39% expect them to pay higher multiples for tech vendors in the next 12 months, compared with 28% anticipating a drop. The vaguely optimistic outlook comes on the back of a tough year for selling assets to sponsors. Leveraged buyout shops paid a median 2.9x trailing revenue for their tech purchases in 2020, the lowest since 2016, according to the M&A KnowledgeBase.

There was notable consensus that competition for deals would push up pricing on PE acquisitions – a consensus that was absent from previous surveys. Nearly two in three (63%) forecast contested transactions among PE firms to increase M&A prices. A nearly identical 61% said the need to beat out strategic buyers would also propel multiples in 2021. In our year-ago survey, the majority didn't expect either form of competition for deals to impact pricing. Still, that will be weighed against the prospect of a recession, which, in the current survey, 61% said could be a drag on PE multiples. 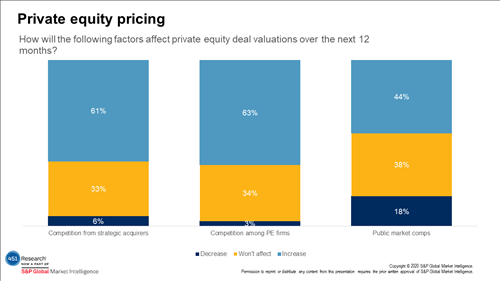 If the Tech M&A Leaders' Survey proves prophetic, PE firms will have good reason for paying higher prices – they're heading into a promising exit environment. Far more respondents (69%) predicted a favorable exit environment for PE assets in the next three years, whereas just (31%) anticipate things to turn against buyout shops. In the next 12 months, most (64%) expect sales to strategic buyers to deliver an increasing number of those exits, with bankruptcies (61%) and secondary sales (54%) also widely projected to expand.

A vote for Biden

Few respondents anticipate that the incoming Biden administration will have a negative impact on tech dealmaking. They were four times as likely to say the recently wrapped US election would have no impact (43%) or a positive impact (37%) on tech M&A activity in the next 24 months than to forecast a negative impact. Despite that mostly neutral outlook, they anticipate that several policy issues will loom large over tech M&A in the wake of the election. A full 82% expect corporate tax policies to be more important to tech M&A in 2021. They handed out similar readings for international trade policy (79%), US-China relations (74%) and antitrust policy (75%).

Respondents delivered a bullish outlook for international M&A involving targets headquartered in North America. More than half (56%) expect North American companies to get bought by acquirers outside that region at a higher rate in 2021, while only 8% foresee a dip in such transactions. Yet in 2020, it was acquisitions of UK-based vendors that pushed cross-border M&A by strategic acquirers to a record $200bn, according to the M&A KnowledgeBase. Just two purchases of UK targets by US companies accounted for $72bn of the international total in 2020.

Despite the success of big, UK-based firms luring foreign suitors, our respondents declared that Europe itself is more likely to attract an increase in international buyers in 2021. Respondents were almost four times as likely to anticipate an increase (44%) in cross-border acquisitions of European Union targets than to forecast a decrease (12%). The UK fared a bit worse, with 38% expecting an increase, and 19% foreseeing a drop. 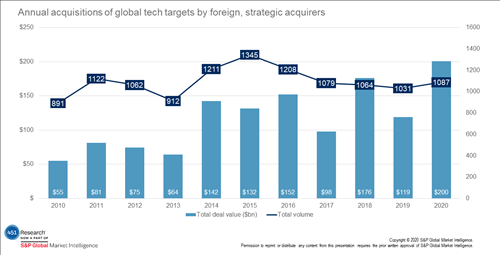 SPAC to the future

Special purpose acquisition companies (SPACs) came from nowhere to take up a significant slice of the tech M&A market last year. The survey suggests that they're here to stay. SPAC acquisitions of tech targets surged to 35 in 2020, more than double the activity of any other year. In our survey, respondents – at a rate of three to one – expect to see more of them in the next three years. A full 66% said tech purchases by blank-check companies would rise, with just 22% anticipating a decline. 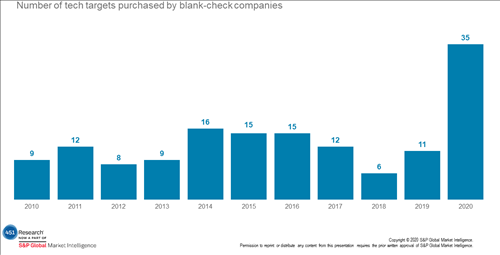 About the survey: Now in its sixteenth edition, the Tech M&A Leaders' Survey drew 89 responses, primarily from investment bankers (39%) and c-level or M&A executives (39%), with the remaining responses coming from lawyers, VCs, PE professionals and others in the M&A community. Roughly 79% came from dealmakers and advisers based in the US; Silicon Valley represented the largest single locality, accounting for 34% of the total.