As the benefits of gender-diverse leadership grow more apparent, the oil and gas sector continues to struggle to boost the number of women it has in leadership positions.

The share of women on boards of oil and gas companies reached 14% in 2019, double the level in 2009, according to a recent S&P Global report. But with fewer than one female board member out of every five, the sector is ill-positioned to reap the gains that diversity can bring.

"The energy sector remains one of the least gender-diverse sectors in the economy, despite recent efforts to promote and encourage women's participation," Cecilia Tam, an analyst with the International Energy Agency, wrote in March 2018. "This is especially important given the role that women can often play as key drivers of innovative and inclusive solutions."

With that backdrop, changes from female to male leadership in the industry take on greater meaning. In August, among a record number of C-suite changes across the energy sector, Western Midstream Partners LP replaced President and CEO Robin Fielder and Vice President and COO Gennifer Kelly, with Michael Ure and Craig Collins in the respective roles. The shift connected with Occidental Petroleum Corp.'s acquisition of Anadarko Petroleum Corp. — a deal that was spearheaded by Occidental's CEO, Vicki Hollub.

The executive changes at Western Midstream Partners from female to male leadership, while seemingly inconsequential, takes on new meaning in an industry where Petroleum Equipment & Services Association President Leslie Beyer said fewer women are working than in almost any other major sector.

A 2018 study by PESA, in partnership with Accenture, showed that only 16% of the more than 250,000 people employed across the oil and gas industry were women. Women held less than 17% of executive jobs in oil and gas and just 1% were CEOs, Beyer told S&P Global Market Intelligence in an Aug. 21 email.

But as shareholders exert pressure on oil and gas companies to embrace women across all levels of employment, leadership numbers are improving.

According to the S&P Global report, the board of BP PLC is 36% female although its executive team is still just 15% female. At Royal Dutch Shell PLC, women made up 45% of the board at the end of 2018, up from 8% in 2011. That may reflect a trend by large companies, particularly in Europe, to advance diversity and offer generous maternity leaves, S&P Global said.

PESA is encouraging its member companies to increase women in leadership from 16% to 20% by 2020. 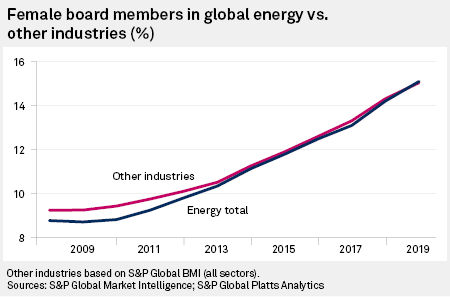 "It will take diverse thinking for the industry to address the challenges it faces today including those around climate and rising emissions," said Katie Mehnert, CEO at Houston-based Pink Petro, a company created for women professionals in the energy industry. Mehnert said in an Aug. 26 interview that there is no lack of women capable of helping the industry face these challenges. "If companies looking can't find them, they are not looking hard enough," she said.

Women by increasing numbers are graduating with degrees and qualifications in high demand by the industry, Beyer said. However, hiring and advancement opportunities for women trail many other industries.

Even when men and women start in their careers on an equal footing, studies show that it is more difficult for women to reach the top of the organization. PESA data shows that of the 16% of women that make up the U.S. oil and gas industry workforce, 31% hold positions in support functions like human resources, legal and information technology. Globally, women make up 34% of the support role workforce. However, less than 21% of the executive leadership roles are held by women.

The situation is starker in technical operating functions, such as manufacturing, engineering or research. PESA data shows women make up 9% of the global workforce and 8% of the U.S. workforce but they make up less than 7% of the highest-ranking executives, Beyer said. 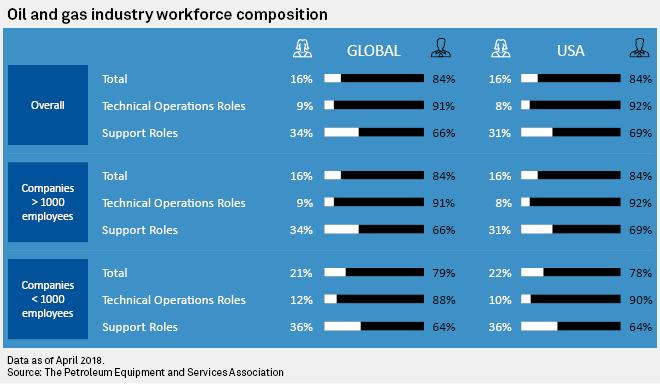 The image of a lack of advancement opportunity for women in oil gas sends well-qualified candidates looking outside of oil and gas for employment, Mehnert said. "The industry needs to be cognizant that it is providing a culture of inclusion," she said.

Beyer agreed: "CEOs must commit themselves and their companies to promote a workplace culture that provides flexibility for employees, advance gender-equality goals and make real efforts to place diverse candidates in highly visible roles." 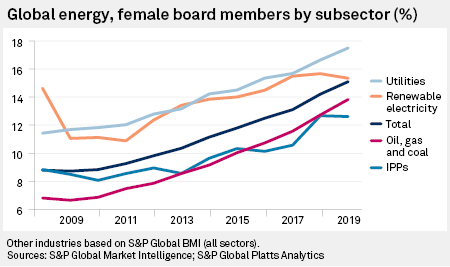 To address the gender gap, many oil and gas companies have placed diversity goals and metrics on their recruitment teams to attract more diverse candidates, Beyer said. Some have also developed affinity groups to create communities of support within the workplace. Also, many are increasingly investing in science, technology, engineering, and math programs for both girls and boys, with young adults in economically challenged areas being the focus of the programs, Beyer said.

In the end, the industry is creating the workforce of the future, and that will require a culture change, Mehnert said. The oil and gas industry needs to address the lack of flexible work programs and change the perception that there are better career prospects elsewhere. It must advocate and sponsor women in the workforce because "companies that are inclusive thrive," Mehnert said.

The PESA study found companies with at least 30% female leaders end up raking in 6% higher net margins, and companies with a higher percentage of women in executive positions have a 34% higher total return to shareholders than those that do not.

The industry needs to do a better job getting the word out that the oil and gas industry is a great place to work, Mehnert said. It has to let women know that they can have meaningful careers in an industry that fuels the world, the Pink Petro CEO said.