Record-low interest rates and a long bull market helped to fuel several big debt-financed acquisitions in the technology, media and telecommunications sectors, but as debt totals approach levels not seen since just before the 2008 financial crisis, many TMT companies are looking to cut back.

U.S. TMT companies together ranked second among all sectors for total debt in 2018, with $1.75 trillion outstanding, behind only the financial sector, which had $10.08 trillion, according to data from S&P Global Market Intelligence. 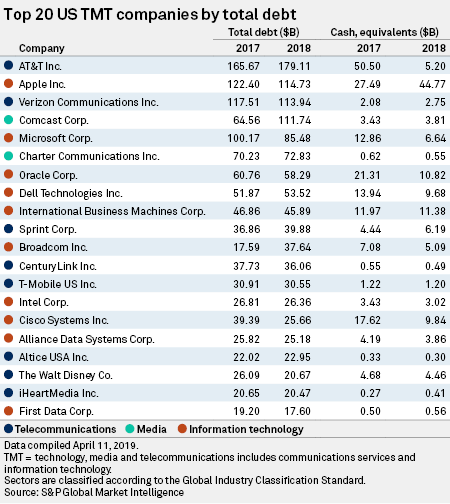 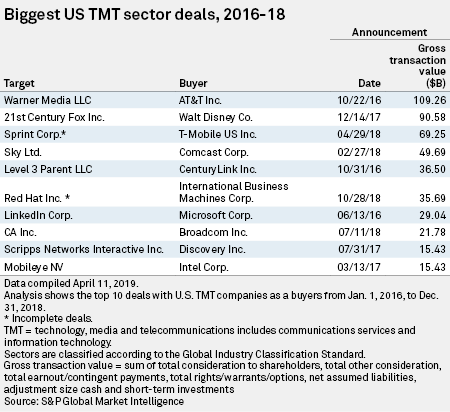 Moody's debt analyst Neil Begley said that while many TMT companies strategically borrowed in recent years to finance M&A, share repurchases and other activities, the industry is beginning to shift strategies to prepare for a potential market downturn. Some, like AT&T Inc. — the top TMT debt holder in 2018 with $179.11 billion outstanding — are installing revolving credit facilities to provide liquidity in case there is any disruption to their access to capital markets at current rates, Begley noted.

"It's something we would expect most companies to do even if they have a lot of cash," the analyst said.

AT&T drove up its debt levels to finance its $109.26 billion acquisition of Warner Media LLC, which closed last year. During a March investor conference, AT&T CFO John Stephens said it plans to pay $12 billion of that debt in 2019, driven in part by asset sales.

"We want to, most importantly and always on the front of our list, pay down debt," Stephens said at the conference.

Comcast Corp. also saw its debt rise after the company's $49.69 billion acquisition of Sky PLC. Comcast said in its 2018 Form 10-K filing that it will pause share repurchase activity under its $12 billion repurchase program "to accelerate the reduction of indebtedness we incurred" in connection with the Sky deal.

Comcast was the fourth largest debt holder in the TMT sectors at the end of 2018, with $111.74 billion in total debt, up from $64.56 billion a year earlier. It was one of only a couple of companies among the top 20 TMT sector debtholders to show a significant year-over-year increase in debt between 2017 and 2018. Apple Inc. and Verizon Communications Inc., the No. 2 and No. 3 largest TMT debtholders — with $114.73 billion and $113.94 billion in total debt in 2018, respectively — both reported small reductions in their debt loads between 2017 and 2018.

The Time Warner and Sky deals are part of a wave of consolidation in the media landscape as companies grapple with significant changes in consumer behavior, including a massive shift to digital and on-demand video content. While attractive sector targets remain, Moody's Begley said he expects sector M&A activity and debt holdings to retreat in 2019 and beyond given concerns about an economic correction and record levels of sector leverage.

"I would not be surprised if we see more consolidation," she said.

She pointed to smaller pure-play cable network companies such as Viacom Inc., AMC Networks Inc. and Discovery Inc., which have been cited as potential targets and would be vulnerable to cyclical ad-revenue declines in the event of an economic downturn. 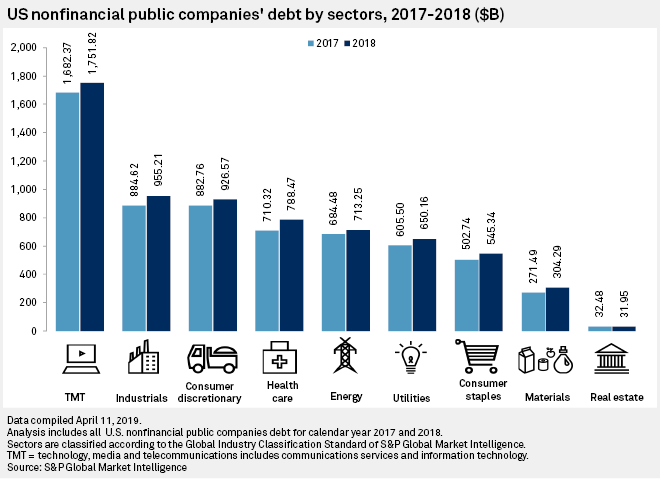