CLO holdings at U.S. banks increased by roughly 12% in 2019, to $99.5 billion, with a number of banks growing their CLO securities exposure by double-digit rates, according to year-end filings with the Federal Reserve.

By far, the standout was JPMorgan Chase & Co., whose holdings jumped 57% in 2019, to $29.8 billion, from just under $19 billion at year-end 2018. JPMorgan is now the largest U.S. bank holder of CLO debt in securities form, as it moved above traditional heavyweight Wells Fargo. 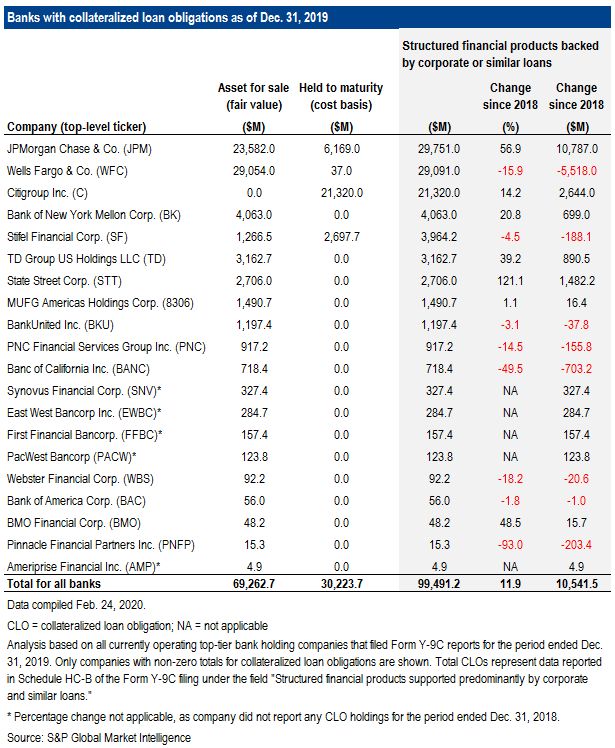 Wells Fargo, meanwhile, has now decreased its CLO securities holdings for two consecutive years. However, a Wells Fargo spokesperson indicated that total CLO exposure actually increased modestly by year end to around $38 billion, as the bank increasingly invests in CLOs in a loan format, as opposed to a traditional CLO security form.

"The total CLO exposure is about $38 billion at this point, which hasn't changed much," said John Shrewsberry, senior EVP and CFO at Wells Fargo & Company, on a Jan. 14 earnings call. "This approach of investing them in the loan form is really just [a] more accounting-friendly approach. It's the same risk-reward otherwise and so we've made the shift as a part of our incremental investment. [It's] still an asset class that we feel comfortable with the risk-reward profile in, in spite of where we are in the cycle and for other reasons."

JPMorgan and Citigroup did not return requests for comment.

What is perhaps most striking about the results is the high degree of concentration of CLO debt inside the three banking entities, relative to the rest of the banking sector. At $80.2 billion, the three largest holders make up nearly 81% of all U.S. bank CLO holdings.

Now, at just under $100 billion, total U.S. bank exposure represents roughly 15% of the $675 billion CLO market. Assuming that U.S. CLO AAA supply is around $400 billion and that most of U.S. bank CLO holdings are AAA, then U.S. banks can be said to hold roughly 25% of all AAA supply, according to researchers from Wells Fargo.

Japanese banks can also be expected to hold near the same amount, or around 25% of the total AAA supply of U.S. CLOs, according to Wells Fargo. Recent filings from Norinchukin Bank, likely the largest buyer of U.S. CLO debt in the world, put total CLO holdings at ¥8 trillion as of December 2019, or roughly $71.6 billion. Japan Post Bank reported holdings of ¥1.75 trillion in non-Japanese CLOs as of Dec. 31, 2019, or roughly $15.7 billion.

Greg Hertrich, head of depository strategies at Nomura, noted that as the Federal Reserve plans for its forthcoming stress test of U.S. banks to incorporate leveraged loan and CLO exposure, it is unlikely to view the current bank exposure to levered credit as a major systemic risk.

“I don’t see anything in any of this data that jumps out as dramatic or very surprising, as an aggregate 10–11% increase in CLO holdings seems relatively small and manageable,” Hertrich said. “The larger banks are making CLOs a greater percentage of their bond portfolio, but certainly for the largest three banks, these exposures are still really small as a percentage of managed assets or capital.”

“It is impossible to predict with any level of certainty what the stress test results would look like, of course," Hertrich added. "With that being said, we are at historically low levels of credit exposure and risk systemically. In this scenario, it would be a surprise to see anything that is unexpected in terms of credit deterioration even in more extreme hypotheticals, or to see across the board changes in credit risk.”