It's Official: US Leveraged Loans Are a $1 Trillion Market


It's Official: US Leveraged Loans Are a $1 Trillion Market 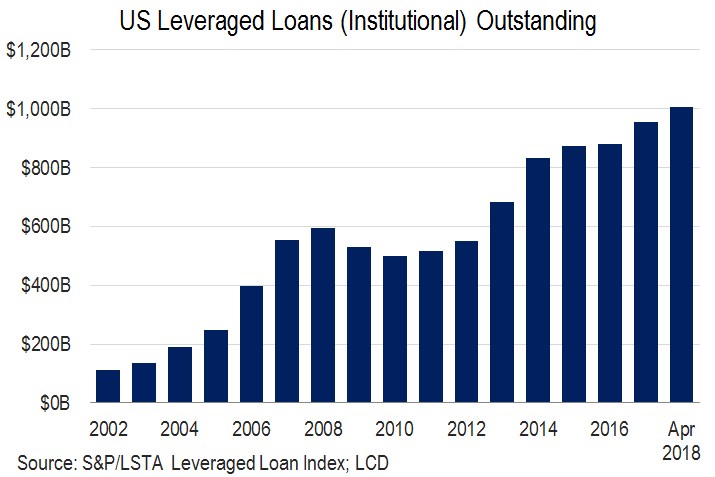 As of April 27, the amount of outstanding institutional credits underlying the S&P/LSTA Index topped that milestone, after growing uninterrupted every year since hitting a post-crisis low of $497 billion in 2010. It has since doubled to its current size.

These two headline numbers are only the latest highlights for a market that has been running at breakneck speed over the last two years.

In 2017 the U.S. loan market printed a record $503 billion of institutional loans, exceeding by 10% the prior high of $455 billion in 2013, according to LCD. While last year’s super-charged conditions contributed to the growth of the Index, however, they did not push it across the $1 trillion mark because 48% of 2017 issuance backed refinancings and recaps. On a net basis, the Index grew by $75 billion last year, roughly half of the $131 billion expansion in 2013.

The growth in the U.S. leveraged loan market over the past few years has coincided with increased interest in the asset class from retail investors into loan mutual funds/ETFs, and via the formation of collateralized obligation vehicles (CLOs), which buy portions of large corporate loans.

CLO issuance in 2017 totaled $118 billion, easily outstripping projections made at the start of the year and nearing the record $124 billion in 2014, according to LCD. And CLO investors have only picked up the pace this year; so far in 2018 there has been $40.3 billion of new CLOs issued, compared to $25.2 billion during the same period in 2017. – Staff reports