The default rate of the S&P/LSTA Leveraged Loan Index now stands at 1.43% by principal amount after term loans backing Medical Depot and Murray Energy were downgraded to D by S&P Global Ratings. 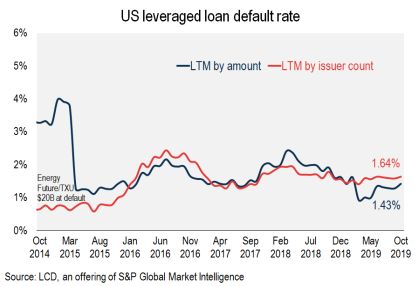 After a blemish-free third quarter for loans, this brings October’s default tally to four issuers to date, pushing the rate by issuer count to an 11-month high of 1.64%, from 1.58% in September.

S&P Global today lowered its corporate and term loan rating on Medical Depot to D after the medical device manufacturer completed a financing that the rating agency considers to be a de-facto restructuring.

Medical Depot's capital structure consists of a $125 million secured revolver, a $430 million first-lien term loan due 2023, and a $167 million second-lien term loan. Both term loans, which were issued in 2016 to back the buyout of Drive DeVilbiss by Clayton, Dubilier & Rice, are constituents of the S&P/LSTA Leveraged Loan Index.

Medical Depot’s debt exchange transaction, in which the company issued a $35 million new money term loan to its financial sponsor and participating second-lien lenders, also amended the terms of the first-lien term loan such that the annual amortization will be suspended for six quarters, starting on Sept. 30, 2019 and running through the fourth quarter of 2020. The amortization for 2021 is also being lowered to 2.5% per annum, from 7.5%.

In addition, second-lien lenders will convert the second-lien term loan into a convertible PIK loan.

Thermal coal producer Murray Energy, meanwhile, announced last week that it had elected not to make the amortization and interest payments on its super-priority $1.6 billion B-2 and $158 million B-3 outstanding first-lien term loans due in 2022, prompting a downgrade of the facilities by S&P Global Ratings to D, from CCC. Both loans are index constituents.

The company has entered into forbearance agreements with super-priority term loan and ABL and FILO credit facilities lenders until Oct. 14, under which the debt holders will not enforce any of the rights and remedies available under the credit agreements despite the missed interest and principal payments.

Also contributing to the tally so far in October, Deluxe Entertainment filed a petition for Chapter 11 protection in New York Bankruptcy Court, and S&P Global Ratings lowered Sheridan Fund I to D on account of the company ceasing interest payments to lenders.

Prior to the four defaults, the rate had fallen to 1.12% at the beginning of October, from 1.29% in September, on account of FullBeauty Brands and David’s Bridal rolling off the trailing-12-month calculation.