Retail investors withdrew another $754 million from U.S. funds investing in leveraged loans during the week ended July 3, the 33rd straight net outflow, making for the longest such streak since LCD began following this data in 2007, according to Lipper. 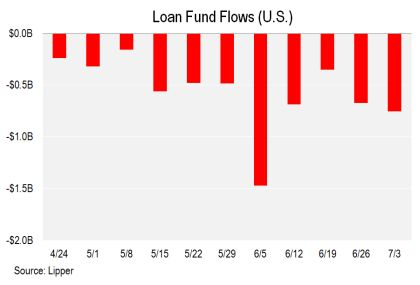 Over that period outflows have totaled $31.8 billion, meaning the current run in the red is far more severe than during the previous record streak, which saw $17.6 billion exit the investor segment over 32 weeks, starting in July 2015 and ending the following March, according to Lipper weekly reporters.

The investor flight from the leveraged loan asset class has taken root over the past few months as prospects of interest rate hikes by the Fed have evaporated, with the consensus now expecting rate cuts in the second half of 2019.

Leveraged loans are floating-rate debt, so the asset class tends to see investment in a rising-rate environment. Conversely, when rates look like they'll hold, or will be cut, fixed-rate assets such as high yield bonds tend to garner investor interest. Indeed, while U.S. leveraged loan funds have seen $18.3 billion of withdrawals so far in 2019, funds investing in high yield bonds have seen a $12.8 billion inflow, according to Lipper.

Loan mutual funds were hardest hit during the most recent reading, as that segment saw a $774 million withdrawal, while loan ETFs managed a $21 million net inflow. Assets at U.S. loan funds now stand at $76.5 billion, of which $8.4 billion are from ETFs, according to Lipper. – Tim Cross